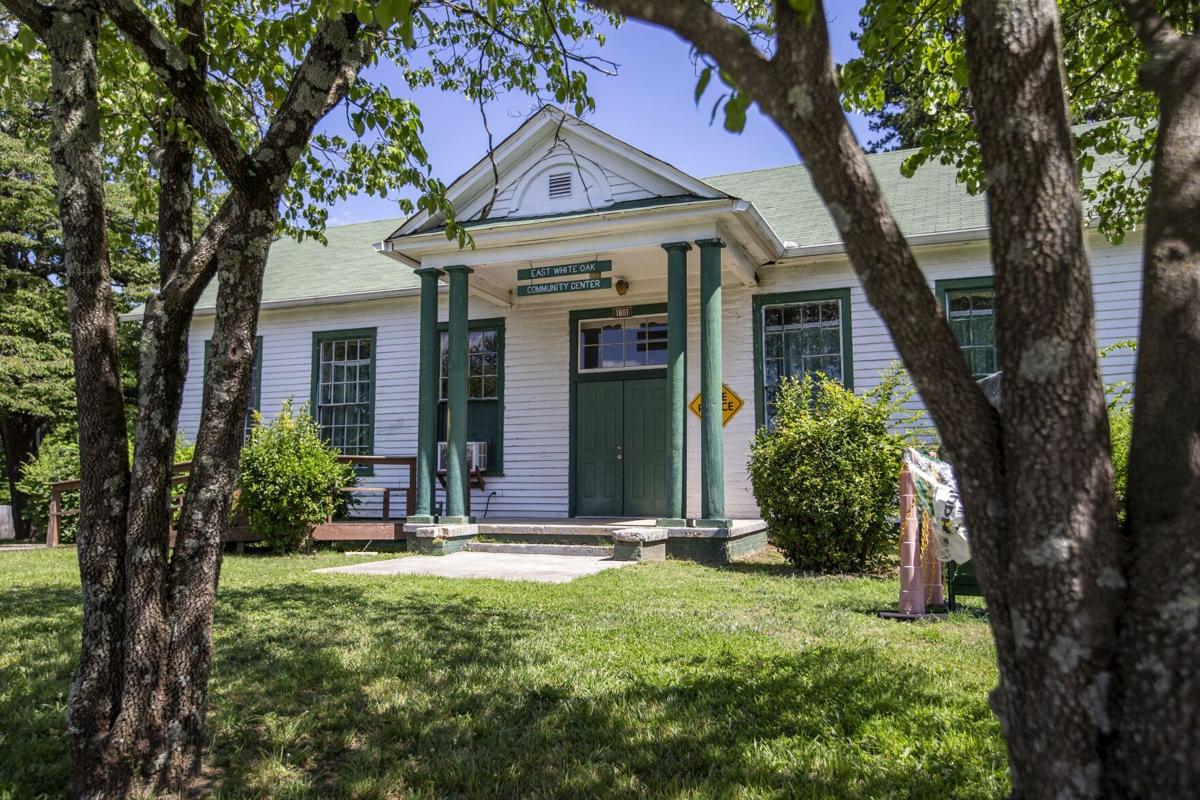 The East White Oak Community Center at 1801 10th St. in Greensboro was originally a one-room school house for the children of Black mill workers. 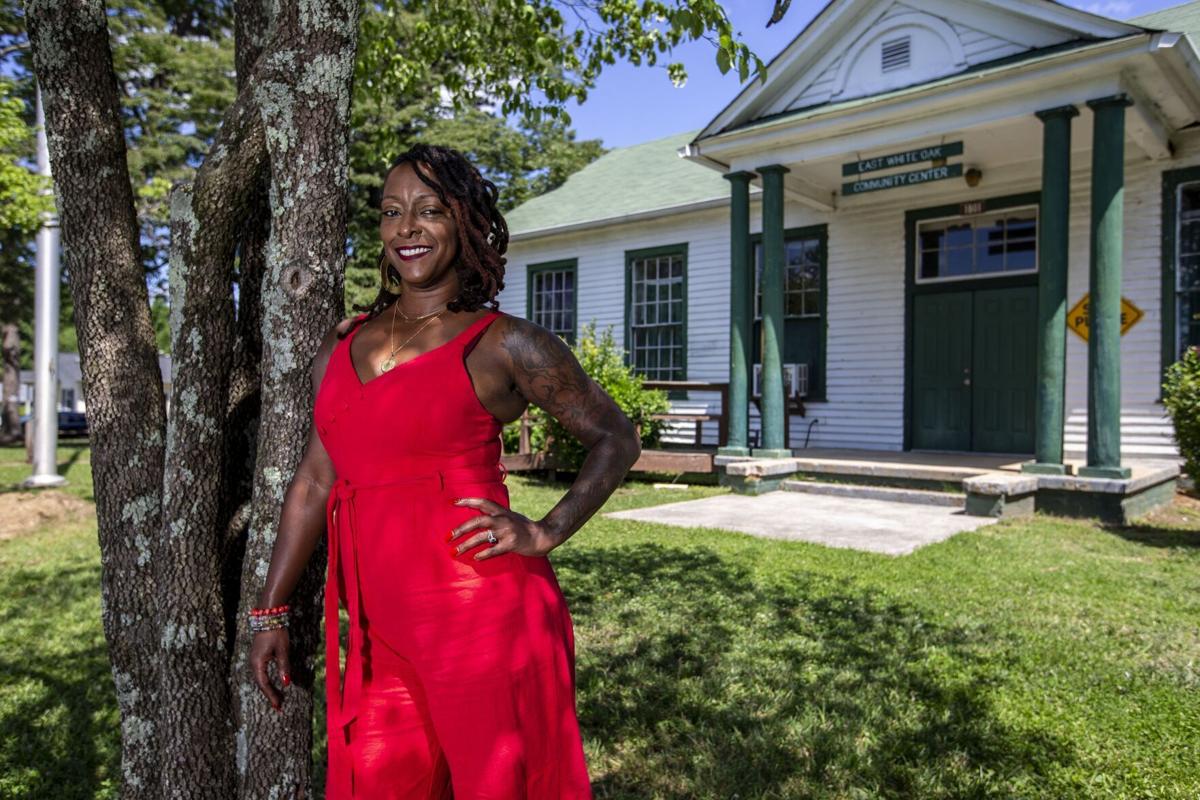 Sunny Gravely Foushee secured the grants for the sculptures that have been placed in front of the East White Oak Community Center at 1801 10th St. in Greensboro.

GREENSBORO — An unveiling of interactive sculptures celebrating two native sons this Friday is part of an effort to also make the historic East White Oak Community Center a travel destination within the city.

The community center, which got its start in 1916 as a one-room school house for the children of Black mill workers, is listed on the National Register of Historic Places. It is where working-class Black families, who lived in the rows of neat homes built by Cone Mills, forged community.

The late Truman Gant and late David Richmond are the first residents of that groundbreaking community to be recognized as part of the project.

Richmond, one of four N.C. A&T students who sat down at the segregated counter of the downtown F.W. Woolworth Department Store in 1960, ignited a movement that would help dismantle “Jim Crow” laws across the South. The old Woolworth building now houses the International Civil Rights Center and Museum, which commemorates the story.

A subdivision not far from the community center is named after Gant. The retired Cone Mill employee led efforts to save the building — which has since served generations of children — from being demolished.

In selecting sculptors to do the work, the nonprofit in charge of the project — TAB Arts Center — involved residents and descendants of the men.

The group chose Damien Mathis of Fayetteville and Vandorn Hinnant of Greensboro as lead sculptors.

Mathis’ piece is described as a realistic multimedia sculpture of Richmond with a desk placed in front of the activist, giving the viewer the feeling of being educated about the past.

Known for his multimedia work, the challenge for Mathis was using materials that would withstand the elements. He chose reinforced fiberglass material, resin and different plastics. Richmond is also emerging from a picture frame.

“A broken frame is a representation of something that cannot be contained and his actions went further than he might have even expected,” Mathis said.

Gant’s family had asked that the sculpture dedicated to him pay homage to residents of the strong community that stood there. Some longtime residents in the general area remain.

The resulting memorial bench, which stands 5 feet wide and 4½ feet tall, is made of Corten steel cut for Hinnant by artist Jim Gallucci. The back of the bench is fashioned into an oak tree with a mahogany seat and arm rests and quotes “Gathering folks here,” a popular saying in the community at the time.

“Mahogany is one of the strongest woods on the planet,” Hinnant said of the wood he chose. “That was intentional.”

The group has completed several neighborhood mural projects in historical areas that they see as largely ignored communities.

The nonprofit’s goal is to bring attention to marginalized communities that are largely invisible in the mainstream.

What: Sculpture Garden Unveiling in honor of David Richmond and Truman Gant and fundraising raffle

And while the East White Oak Community Center is being used for events, the building needs some attention. Friday’s unveiling will include a fundraising raffle for that effort.

“They need everyone to care,” said Sunny Gravely Foushee, executive director of the arts center.

Foushee’s group is working with N.C. A&T and Preservation Greensboro Inc. to restore the landmark, which is one of the oldest African American buildings still standing in Greensboro.

The East White Oak village was one of three communities founded by Cone Mills in the early 1900s to provide housing for employees of Cone’s Revolution, Proximity and White Oak plants. Two of the communities were for white employees. East White Oak was built for the Black employees and their families, according to a history of the Greensboro textile plant compiled by a retired employee.

The communities were largely identical — although the Black homes lacked full bathrooms — and featured small, wood frame homes with front porches. Rents were the same also — 92 cents a month — much less than the going rate in other parts of the city at that time.

“You almost had to have homes for your employees,” Norman Pinkelton, the retired Cone employee, told the News & Record in 1995. “You didn’t have cars.”

After using the building as a school, Cone Mills later briefly turned it into a YMCA.

In 1950, Cone started selling the houses to employees who wanted to buy them. At that time, Cone also announced plans to sell the building, which no longer housed the YMCA.

The community, led by Gant, raised the money to buy the building by holding chicken dinners, bake sales and socials. Gant, a deacon at his church and superintendent of the Sunday school, died in 1983.

Gant became a virtual institution at the center — stocking the concessions stand out of his own pocket, overseeing maintenance and supplies, making sure the doors were open when neighborhood children needed a place to go. He was there when community members needed help and was responsible for a role in fostering the Boy Scouts of America programs for Black youth in White Oak.

“Mr. Gant always said he had a rough childhood, so he said children should have a place where they could go and just be children,’’ Kermit Miller, a former chairman of the center’s governing council, told the News & Record in 1990.

In the early 1990s, residents along White Street wanted a new neighborhood planned by Habitat for Humanity to be named after Gant. The 5.5 acres for the neighborhood was donated by Cone Mills.

Truman Gant Woods now bears the advocate’s name. “He touched a lot of lives; that’s why we wanted it named after him,” Miller said in 1990.

After his death, Gant’s daughter-in-law, Marilyn Gant, who has since died, continued working at the center and oversaw a city-funded recreation program there.

Later, others stepped in to keep the community center going and granddaughter Cathy Gant Hill is the board’s chairwoman.

Eiza Gonzalez makes history as the new face of Bulgari

Meet pastel artist Malia Bryngelson this Saturday, July 31, from 11 a.m. – 1 p.m. outside the Cabarrus Arts Council. Malia will be showing the…

The East White Oak Community Center at 1801 10th St. in Greensboro was originally a one-room school house for the children of Black mill workers. 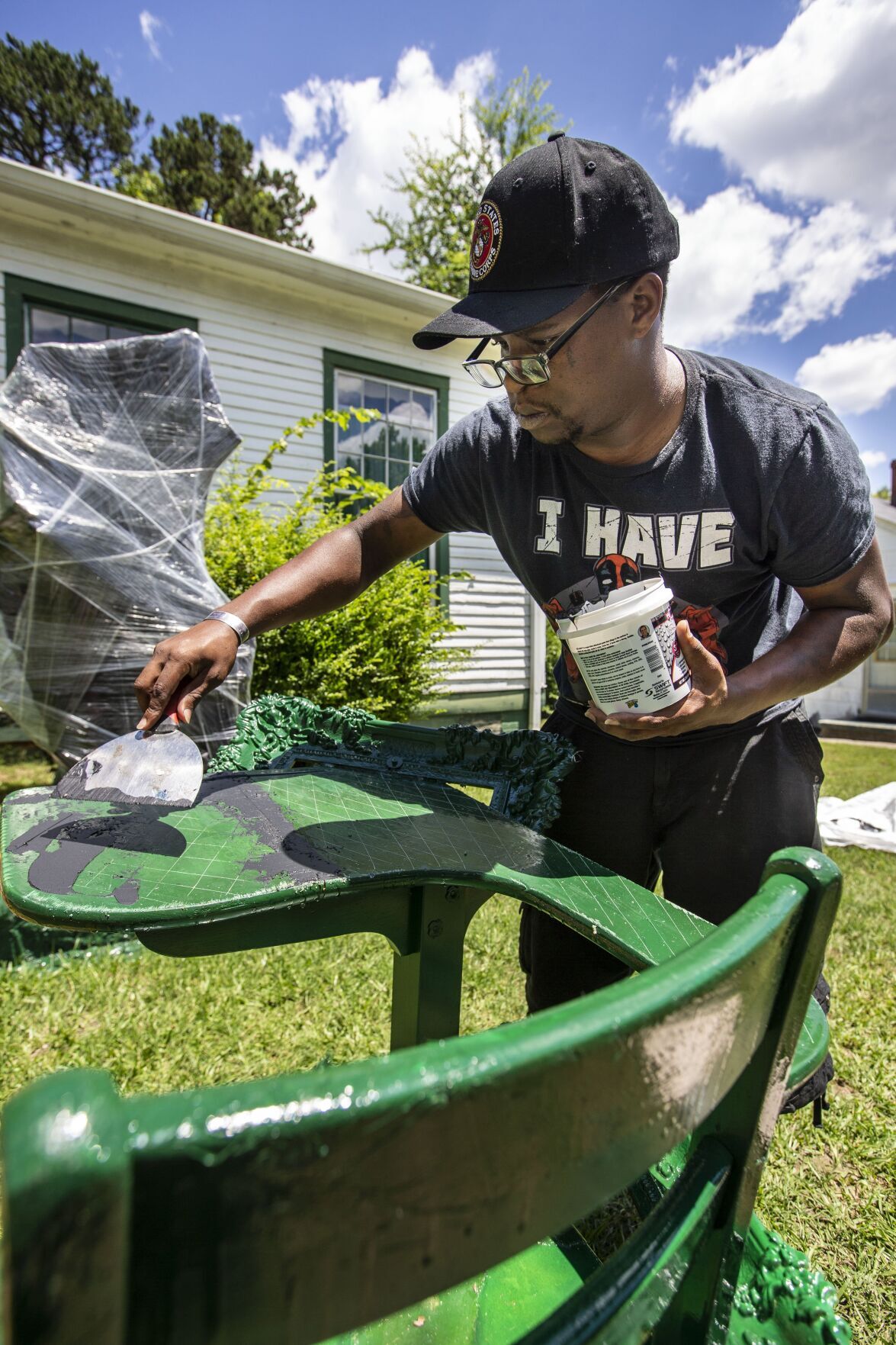 Fayetteville artist Damien Mathis works on his sculpture in front of the East White Oak Community Center at 1801 10th St. in Greensboro earlier this month.

Sunny Gravely Foushee secured the grants for the sculptures that have been placed in front of the East White Oak Community Center at 1801 10th St. in Greensboro.