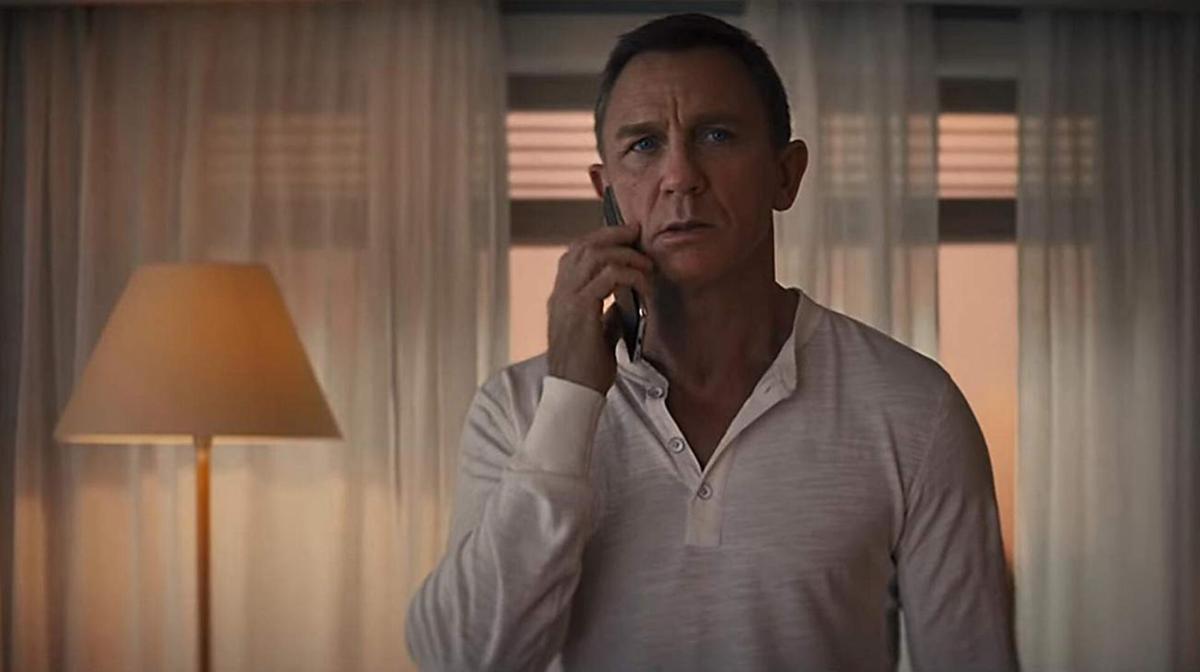 Daniel Craig in “No Time to Die.”

It’s hard to say where “No Time to Die,” Daniel Craig’s final turn as James Bond, will end up ranking among the movies featuring the suave British Secret Service agent. But it’s definitely a more fitting finale than 2015’s underwhelming “Spectre,” and it is packed with Easter eggs for eagle-eyed 007 fans.

“No Time to Die” — which opens in the U.S. on Friday — is the 25th official Bond movie (not counting 1983’s “Never Say Never Again” with Sean Connery and the 1967 spoof “Casino Royale,” neither of which were produced by longtime 007 caretakers Eon Productions). And like both the 40th anniversary movie “Die Another Day” in 2002 and “Skyfall,” 2012’s golden anniversary entry, it is packed with hat-tips to several previous adventures:

The famous Aston Martin DB5 has appeared in so many Bond movies that it doesn’t really count as an Easter egg, but this marks the first time Bond has used any of its arsenal of gadgets while driving since 1965’s “Thunderball.” Bond tools around in another Aston Martin later in the film, but that one is the Aston Martin V8 Vantage that Timothy Dalton drove (and blew up) in “The Living Daylights” in 1987.

Bond forever will be tied with sophisticated 1960s fashion, but an early scene has a scientist played by David Dencik sporting a dorky white hazmat suit with a clear plastic hood just like Joseph Wiseman’s evil Dr. No wore in 1962.

You’d expect Hans Zimmer’s score to sample “The James Bond Theme,” written by Monty Norman and arranged by longtime Bond composer John Barry (and it does), but it also has callbacks to Barry’s moody score for “On Her Majesty’s Secret Service,” which includes Louis Armstrong’s wistful “We Have All the Time in the World.”

During a tense scene with Bond, Ralph Fiennes as British Secret Service head M is in a room with portraits of two of his predecessors: Judi Dench — who had the role from “Goldeneye” through “Skyfall” — and Robert Brown, who was M in the 1980s for Roger Moore’s final two films and Dalton’s only two. If there was a third painting of original M actor Bernard Lee, I missed it.

Bond notices someone’s been smoking in his house in Jamaica, and we see the cigar in question is a “Delectado.” That’s a reference to a code used in Brosnan’s “Die Another Day,” when 007 calls on a sleeper agent running a cigar factory in Havana.

Yes, Bond orders a vodka martini, shaken not stirred, which is only to be expected. But, in a blink-and-you’ll-miss-it scene at Bond’s Jamaican spread, you’ll see a bottle of Blackwell rum on his bar. It’s made by Chris Blackwell, founder of Jamaica’s Island Records who worked as a location scout on “Dr. No.”

He also is the owner of Bond creator Ian Fleming’s Jamaican home, Goldeneye, where he wrote all the Bond stories, and his mother, Blanche Blackwell, was Fleming’s longtime mistress.

Craig’s Bond mockingly asks “Who’s the blond?” in reference to Billy Magnussen’s American agent Logan Ash. Could this be a sly reference to the “James Blond” hubub that surrounded Craig’s casting? I hope so.

Eva Green’s Vesper Lynd from “Casino Royale” is again brought up as the love Craig’s Bond can’t let go of. We get to visit her tomb, where it’s revealed that she was born in 1983 (making her three years younger than Green) and died in 2006, cementing the date of “Casino Royale.” Hopefully, Green gets a check every time her photo shows up in a Bond movie.

We get a peek into Bond’s garage, where he keeps the Aston Martin Vantage, and also get a glimpse of the Royal Doulton “Union Jack” bulldog statuette that was on M’s desk in “Skyfall” and later came into Bond’s possession.

Fans of Ian Fleming’s James Bond novels likely will notice a few details taken directly from “You Only Live Twice,” the last novel published before Fleming’s death in 1964. This includes dialogue from a key scene between Craig’s Bond and Christoph Waltz’s Ernst Stavro Blofeld, a reference to a poisonous “garden of death” and a quotation M reads late in the film.

The famous gun-barrel sequence that traditionally opens the Bond films makes a welcome reappearance, with a few differences from past incarnations. Notably, Craig is wearing a tuxedo in this sequence for the first time in his five films after wearing a suit in the others. A return to form? Maybe. Sean Connery only wore black suits (and a hat) when he did it, as did George Lazenby. In fact, Bond didn’t wear a tux in the famous walk-and-shoot scene until Roger Moore’s third movie, 1977’s “The Spy Who Loved Me.” After that, it was standard issue to all 007s until Craig went sans tux (and sans necktie) in “Casino Royale.”

REVIEW: 'No Time to Die' is one of the best films of the year

4 horror films based on literature

Settle this eerie version of the book vs. movie debate with these four horror films based on literature

Daniel Craig in “No Time to Die.”