Nearly every major college football fan in America wanted to know where he was going to continue his career, but the Jay M. Robinson star defensive end kept it close to the vest – as in he told no one.

Even his own daddy didn’t know, and this is the man who helped give him life and serves as the principal of the high school Hobbs attends.

But on Friday evening, with fans gathered in Jay M. Robinson’s gymnasium, Hobbs was finally able to let the college football world know: He’s going to be a Tennessee Volunteer.

As an All-American, he was also the No. 1 recruit in North Carolina and the first five-star football player Cabarrus County has produced in several years.

He said he plans to graduate in January and enroll at Tennessee for the spring semester. That way, the 6-foot-5, 275-pounder said, he can get a jump on his college degree and participate in spring practices.

More than 30 colleges had offered him scholarships, but he ultimately decided that “Rocky Top” would be home sweet home.

“It just seemed like it was the right choice to make,” Hobbs said. “I felt at home there, they showed lots of love. (Defensive line coach Rodney Garner) does a good job developing his players, and I like the direction (head coach Josh) Heupel has them going in, so it was the best fit for me.”

But what pushed him more toward Knoxville, Tennessee, after taking visits to Athens, Georgia; Ann Arbor, Michigan; Columbus, Ohio; and Chapel Hill?

“On my other (official visits), I didn’t have the same feeling that I had at Tennessee, so that’s how I knew it was right going there,” he said.

And Hobbs said he had amazing experiences on the two occasions he went to Knoxville.

His first visit there was Oct. 15, for what many considered college football’s best game of the year. The Volunteers won that nationally televised contest, 52-49. And afterward, what seemed like every Tennessee fan in America stormed the Neyland Stadium field, tore down the goalposts, and took them away.

Hobbs said he didn’t get caught up in it all, but he certainly enjoyed it.

“It was a crazy game, a crazy environment,” he said. “The biggest game of the year. It was the best experience a recruit could have. I was sitting on the 50-yard line. I didn’t go on the field after the game; I went to the locker room. I saw them rush the field and took some videos. It was pretty cool to witness.”

The announcement for Hobbs’ decision Friday was similarly entertaining – although no goalposts or rims were toted away.

Hobbs was seated at the center of a table, surrounded by friends, family and mentors.

His parents, Dennis and Adrianne, were on each end, while his sisters, Ella and Camri, and little brother, Reason joined them. Also, his best friend and teammate, Zi’Kei Wheeler, was seated to his left, while former teammate Blue Monroe and fellow Jay M. Robinson senior Isaiah Herrara stood.

Rounding out the group were Jay M. Robinson football coach Darius Robinson and Bulldogs basketball coach Lavar Batts Sr., who led the team on which Hobbs was the star, to the Class 2A state championship last year.

The day was even more important for Hobbs because of the reason he pushed his announcement back to Friday: It was his mother’s birthday.

Although Hobbs had toboggans from each school on the table, he didn’t do what many recruits have done lately – try on multiple caps before finally donning the one of his destination school. Hobbs simply thanked his parents for all they’d done to get him to this moment, acknowledged everyone else for their contributions to his life, and made the reveal.

Dressed in all black, Hobbs ducked below the table and came back up with a wrapped birthday package for his mother. Adrianne slowly opened the package and then smiled widely as she lifted a black, long-sleeved shirt emblazoned with an orange “T.”

The crowd began to clap, and that’s when Hobbs pulled on his own Tennessee T-shirt, reached for the orange toboggan, and slid it onto his curly locks.

He would officially be a Vol.

He stood and smiled.

The mild-mannered Hobbs said he’d always imagined a day like this, a crowd gathered as he made his college announcement. Although, he did see it going a little differently.

“I’ve been dreaming about this for years. I thought it would be for a different sport, but it’s all good,” said Hobbs, who was named the Most Outstanding Player of the title game when the Bulldogs won the basketball championship last season.

.@JMRFootball and @JMRHS_mBBALL 5-star Daevin "The Mutant" Hobbs talks about his commitment to @Vol_Football over the likes of Alabama, Georgia, Michigan, Ohio State and North Carolina. pic.twitter.com/diBUxhREjO

“It’s just crazy. It doesn’t even feel real, but I’m excited. It feels good to have made the decision. I can’t keep the smile off my face. I’m pretty excited.”

While Hobbs said he’s certain of his decision, he admitted that it was probably the toughest thing he’s done in his life thus far. Asked what school finished as his personal runner-up, Hobbs said it was a tight race.

“Georgia and Alabama were pretty close,” he said. “It was neck-and-neck.”

Asked what Heupel’s reaction was when Hobbs told him he was going to Tennessee, Hobbs smiled.

“I didn’t even tell him yet,” he said. “I haven’t told anybody. A couple weeks ago, I told all the coaches that recruited me that I was going to go dark. But none of them knew. I kept it a surprise all the way.”

Those closest to him had no clue.

Seated in the gym next to a reporter from The Independent Tribune, one small group of people pulled on Tennessee paraphernalia shortly after Hobbs stood sporting his own.

“So you guys knew it was Tennessee all along?” The Independent Tribune reporter asked.

“No!” one young man exclaimed. “He just gave us bags and told us we couldn’t open them until he made the announcement!”

It turned out the group of people was the Harvey family from Mooresville, where Hobbs went to school in his early years, when his dad was a principal.

“They’re pretty much my family,” Hobbs explained. “I’ve been knowing them since I was little, always going over to their house. They’ve always been good to my family. We were over there yesterday for Thanksgiving.”

Darius Robinson, the Bulldogs’ head football coach, said he didn’t know, either. He might’ve had an inkling, but he didn’t know for certain because Hobbs was a vault of secrecy during his college recruitment, especially during the last few weeks.

“He never really came out and said it,” Robinson said. “I’ve known Daevin for three years now, so you just listen to the little blurbs he sends out and pick up little things. I had a feeling, but he never came out and said it was Tennessee. His dad didn’t even know until he put the hat on and gave his mom the gift!

You can refer to them as Cabarrus County’s Final 5.

MOUNT ULLA – Make that three in a row.

US downs Chinese balloon over ocean, moves to recover debris

The U.S. downed a suspected Chinese spy balloon off the Carolina coast after it traversed sensitive military sites across North America and be… 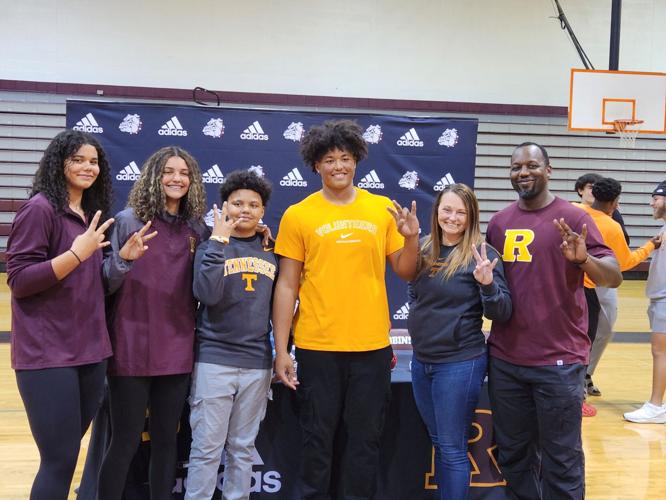