In a locked-down lab, the UNC coronavirus hunter races for answers
View Comments
Share this
Only $3 for 13 weeks
1 of 2 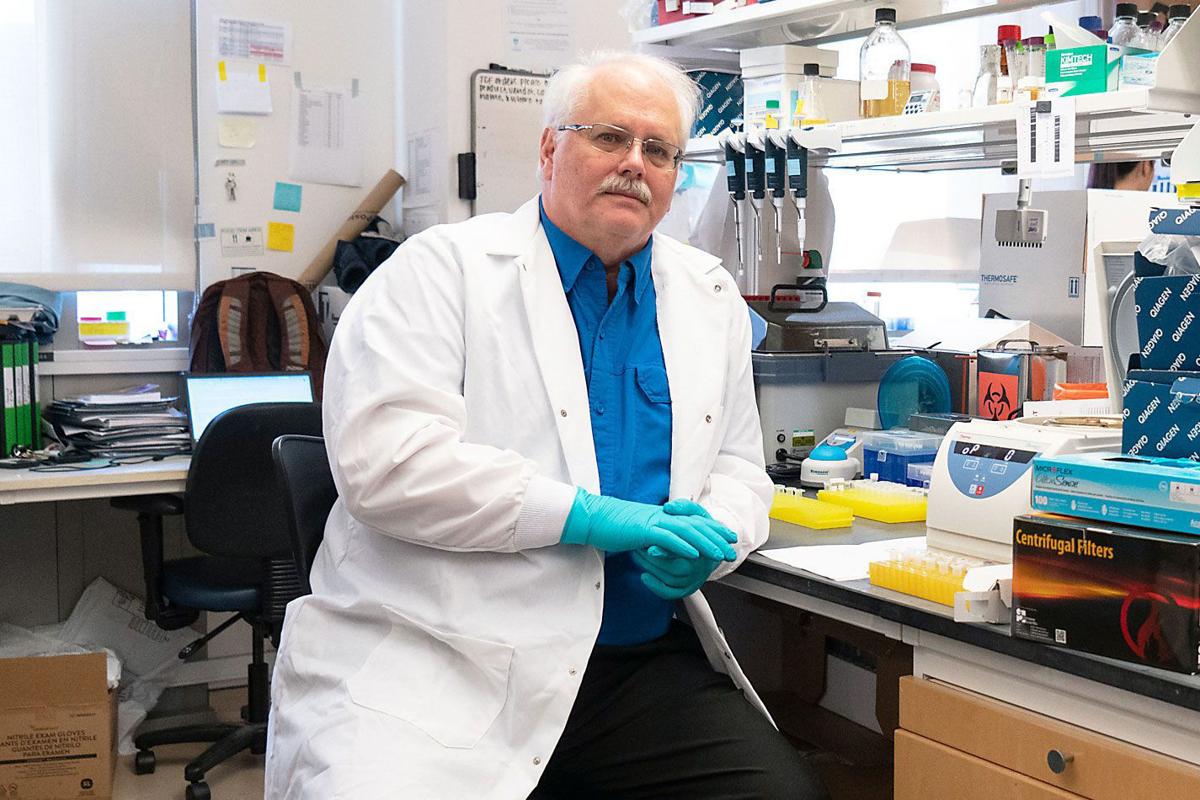 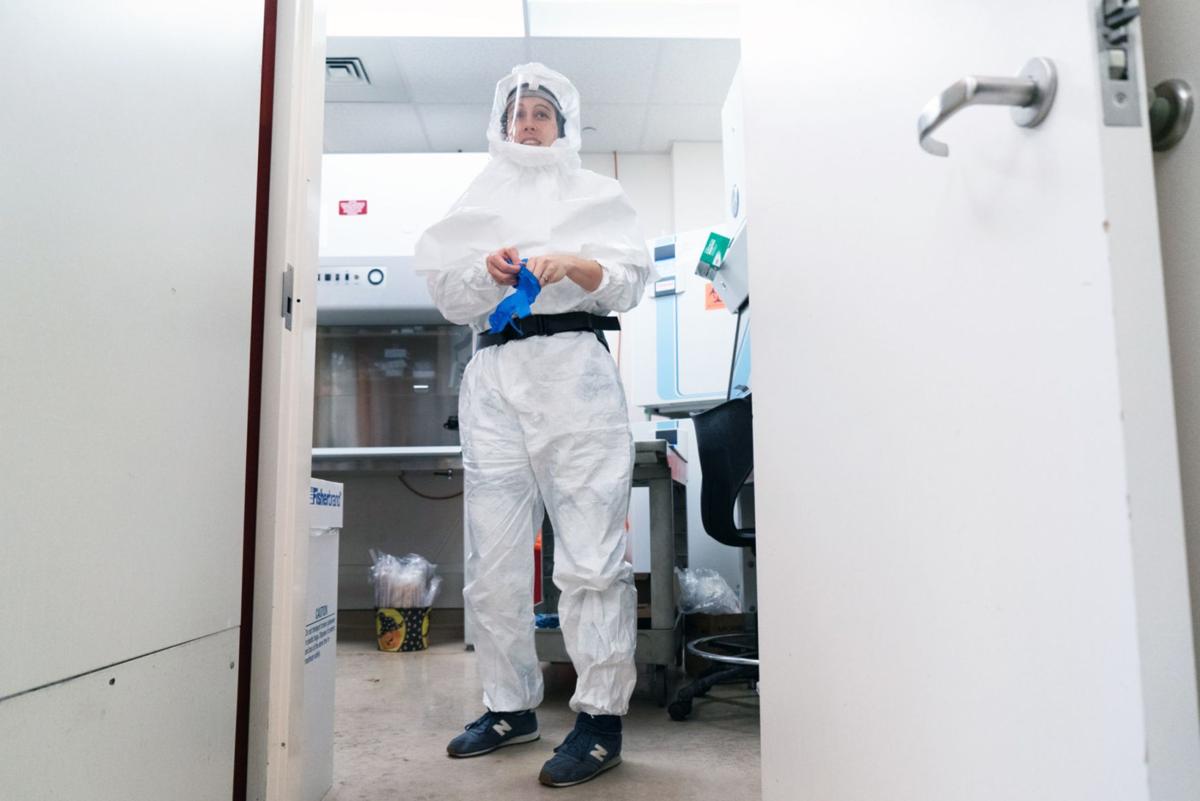 The deadly coronavirus arrived by courier Feb. 6, delivered to a windowless, air-locked laboratory in a secret location on the University of North Carolina at Chapel Hill campus. It came sealed in two 500-microliter vials, wrapped inside plastic pouches, placed inside a third sealed plastic container, all packed with dry ice.A team of scientists — protected head-to-toe by Tyvek body suits with battery-powered respirators — opened the vials, got down to work and haven’t stopped since.

Members of an elite lab of virologists at the university’s Gillings School of Global Public Health, their mission is to come up with a drug to treat the pathogen that has already infected over 90,000 people and killed more than 3,000.

For veteran researcher and lab leader Ralph Baric, it’s the moment he has both long feared and expected. As early as the 1990s, Baric’s work was raising red flags: Coronaviruses — so named for the crown-like spikes that help them invade cells — had an extraordinarily high ability to mutate and adapt. That suggested new coronaviruses might spread into humans in the future. In one study, he showed coronaviruses that infected mice could rapidly adapt to invade hamster cells.

“It was not that difficult to evolve strains that could jump between species,” Baric says.

Almost 30 years later, that’s exactly what’s occured with the deadly new coronavirus known as SARS-CoV-2. Scientists believe it began in a cave somewhere in China, with bats flying off to spread the virus to other animals in the wild. Some of those animals eventually wound up in one of China’s open-air, or so-called wet, markets where live animals are caged in close proximity — a perfect setting for transmitting viruses to humans.

Until two months ago, Baric was little known outside academic circles. When he began his career, coronaviruses were understood as causing little more than a common cold in people. But his work has suddenly taken on new urgency with the appearance of the new coronavirus.

Baric’s 30-person team was one of the first in the U.S. to receive samples of the virus isolated from a patient in Washington by the Centers for Disease Control and Prevention. A handful of other labs are also racing to find anything that might slow the virus’ spread or ease its symptoms, the University of Maryland School of Medicine and Vanderbilt University School of Medicine among them.

Baric’s team is growing as much of the virus as it can to test possible drugs for their ability to inhibit it inside human lung cells in a test tube. This first round of testing will likely wrap up soon. If it works, scientists will test a slew of new drugs in mice that have been engineered to carry human lung receptors that the coronavirus can infect.

“Now that we have the virus, it is a lot of people working all the time,” says Lisa Gralinski, an assistant professor under Baric.

The pace is just as frenzied at the few other labs with samples. “It has been 18-to-20-hour days for the last two months,” says Matthew Frieman, a University of Maryland virologist and a Baric protégé, who was also among the first to receive the virus.

Researchers at the World Health Organization have called Gilead Sciences Inc.’s remdesivir, developed with Baric’s assistance, as the most promising agent identified so far against the new virus. Trials of the drug are underway in hard hit areas of China, and Gilead says it expects results by April.

To speed the efforts, government agencies are redirecting existing funds to bolster coronavirus research. Congress is close to an agreement to greenlight about $7.5 billion in emergency funding, some of which will be for drug and vaccine development. The government is working with Regeneron Pharmaceuticals Inc. and Johnson & Johnson to create new drugs or identify existing ones in the hope of quickly finding something that can slow down the global scourge.

“There are hundreds and hundreds of new technologies. Our job is to comb through those as quickly as possible,’’ says Rick Bright, director of the U.S. Biomedical Advanced Research and Development Authority, a branch of the Department of Health and Human Services. “The ultimate goal is to get as many ideas going” as they can.

No one is more aware of that urgency than Baric, who stands out as a leader in the campaign. Suddenly at the center of the action, he seems uneasy in the limelight, preferring to focus on his work in his office piled high with research papers, virology books and framed patents he hasn’t gotten around to hanging up.

His warnings about the dangers of coronaviruses were first proven on the mark when SARS, or Severe Acute Respiratory Syndrome, swept through China and other countries in 2002 and 2003, eventually killing almost 800. The virus originated in bats and is thought to have passed through palm civets on its way to people. By 2012, a deadly pathogen from camels, Middle East respiratory syndrome (MERS), began killing people in the region. Eventually, more than 850 died. In 2015, Baric and his colleagues were able to show that SARS-like viruses in Chinese horseshoe bats posed a particular threat to cause a new outbreak. The virus spike in the bat coronavirus was unusually adaptable, allowing it to recognize receptors in multiple species, including human lung cells.

Among the most promising was Gilead’s remdesivir, a drug that fared poorly when used against a recent Ebola outbreak in Africa. In the lab, it worked against numerous coronavirus strains, including SARS and other bat coronaviruses that are similar to the new strain. Every coronavirus it was tested on, “it had high potency and efficacy,” Denison says.

That work was fortuitous. In early January, Baric got an urgent call from an infectious-disease colleague to send his unpublished data on remdesivir to colleagues in China who were dealing with a then-mysterious outbreak. Baric says he “was shocked” to see how fast the coronavirus was spreading.

Since then, work at his lab has been virtually nonstop. Each scientist puts in from one to six hours inside two different clean rooms equipped to handle the virus. The lab’s workday begins at 6 a.m. and often goes until 11 p.m. Individual sessions are short for safety and practical reasons — researchers aren’t permitted to eat, drink or visit the bathroom once inside the lab. Everyone has to pass an FBI background check and undergo months of safety training.

Scrubbing up and gowning takes 15 minutes, a laborious process that includes putting on multiple layers of Tyvek suits, nitrile gloves and booties, along with an air-purifying respirator powered by a battery that belts around the waist. Exiting the lab is just as exacting and involves researchers spraying themselves down repeatedly with 70% alcohol as they take off each layer of protective clothing to kill any stray viral particles.

The workload, Baric says, is “overwhelming” as companies and researchers around the globe turn to his lab for help. He’s narrowed down the search to about 100 drugs that are likely to show promise against coronaviruses. Even if the Gilead drug works — a big if — it would have drawbacks: It can’t be offered in pill form, for instance, but must be infused in a hospital or doctor’s office.

More crucially, other drugs may need to supplant it to fight even newer coronaviruses. So Baric is moving forward to find yet other treatments that could succeed against the numerous coronaviruses now lurking in bats and other mammals, poised to jump to humans at any moment.”The goal of our program is to find broad-based inhibitors that work against everything in the virus family,” Baric says . That makes the challenge sound matter of fact, but Baric knows the road ahead will be long and hard.

“I have a lot people who are really tired,” he says. “They are working really hard.”

With assistance from Bloomberg’s Michelle Cortez.

Sign up now to get the most recent coronavirus headlines and other important local and national news sent to your email inbox daily.

The teacher jailed for raping a student she would later marry has died at age 58. Get caught up on all the morning's news.