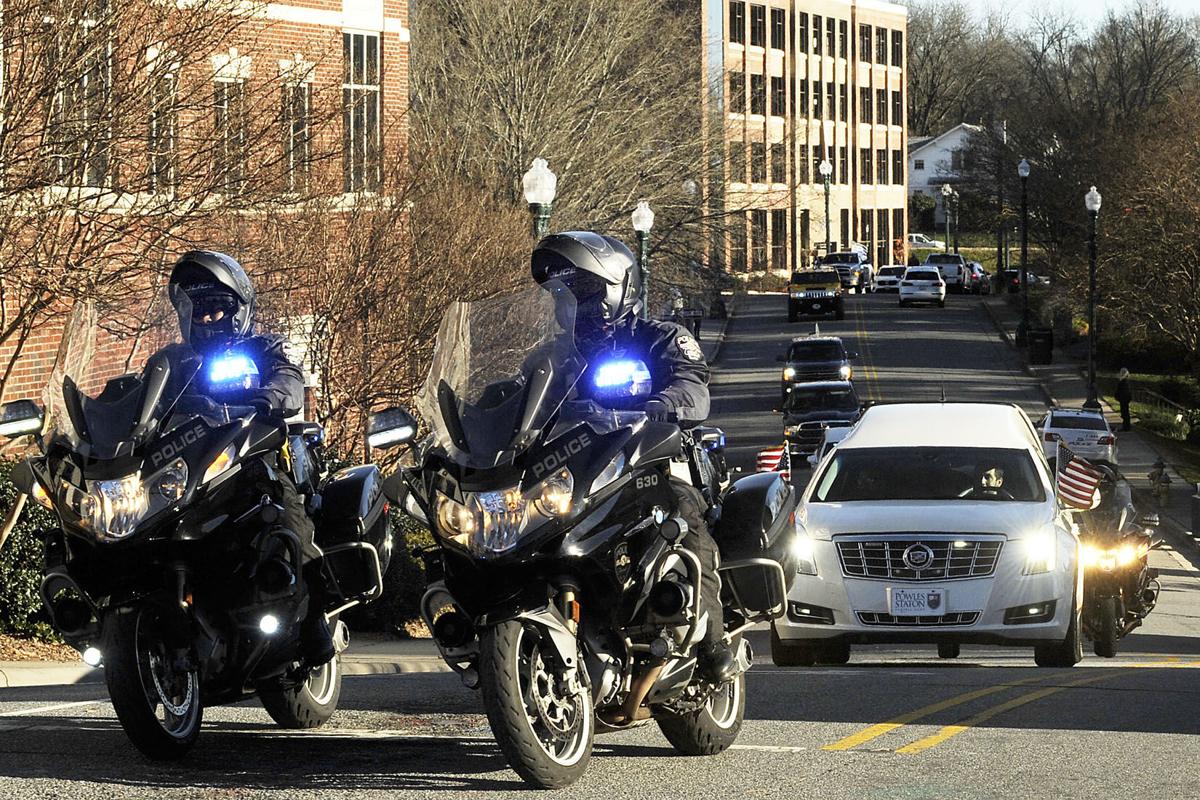 Motorcycle police lead the hearse with Jason Shuping's body up Sprint Street during the processional. 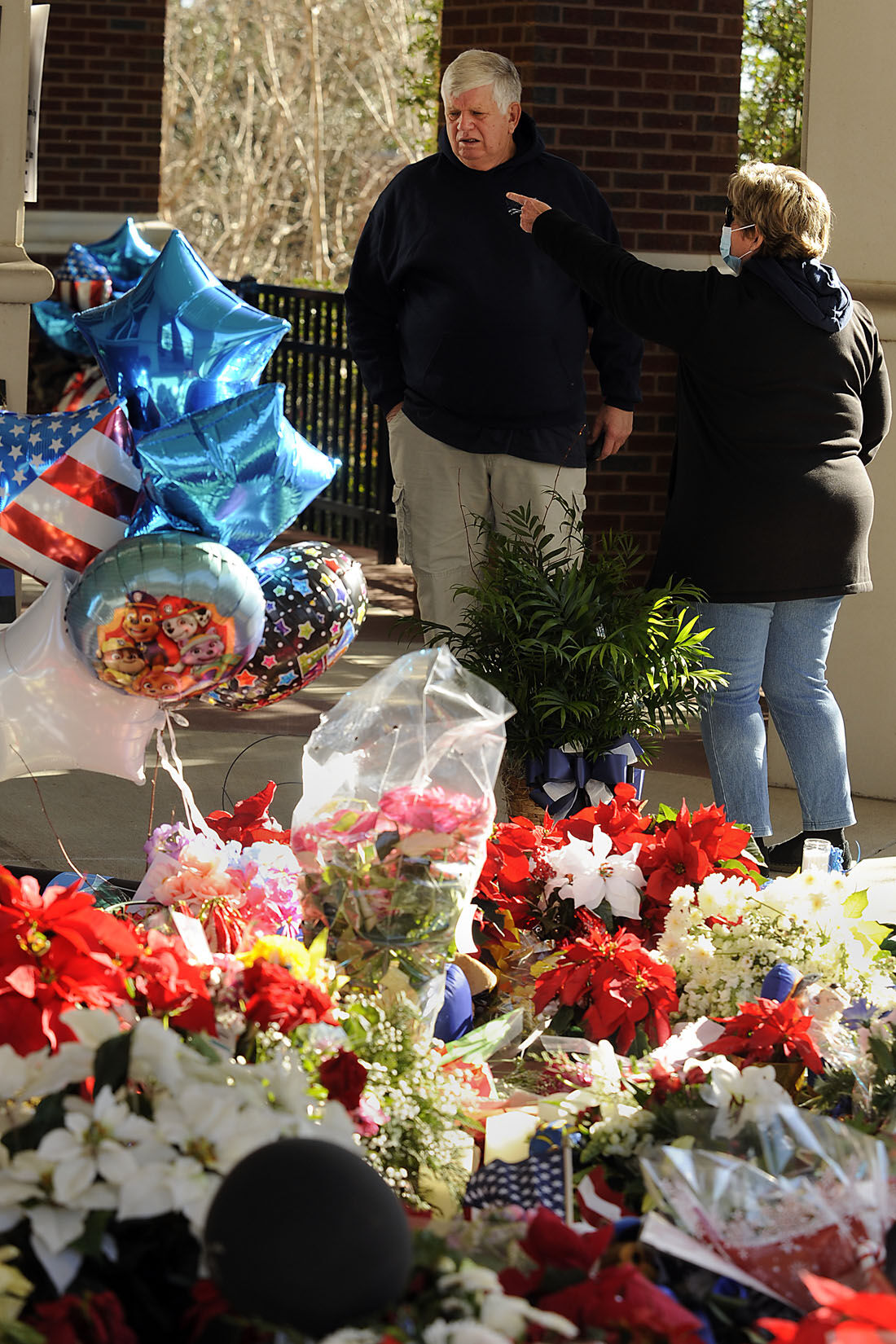 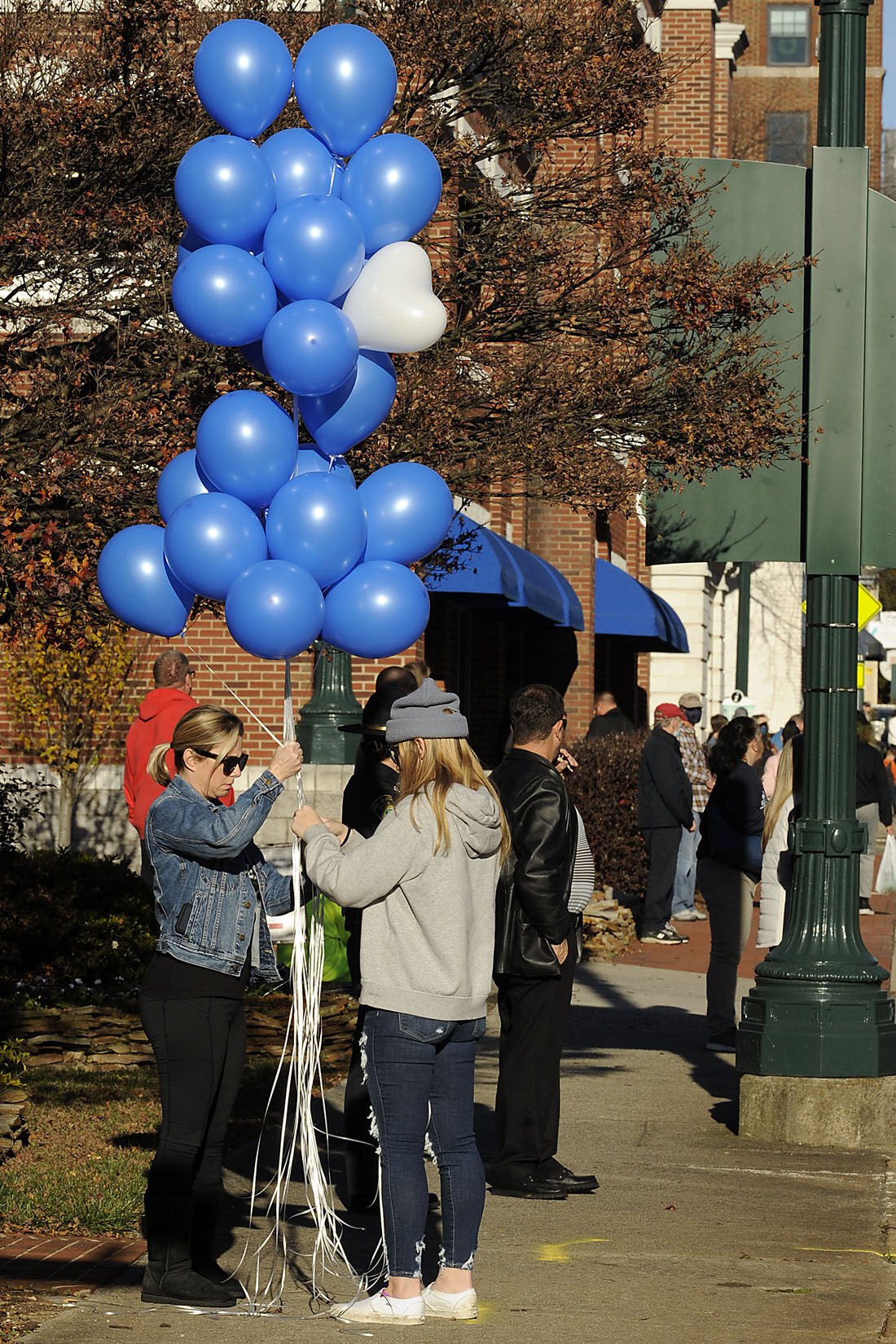 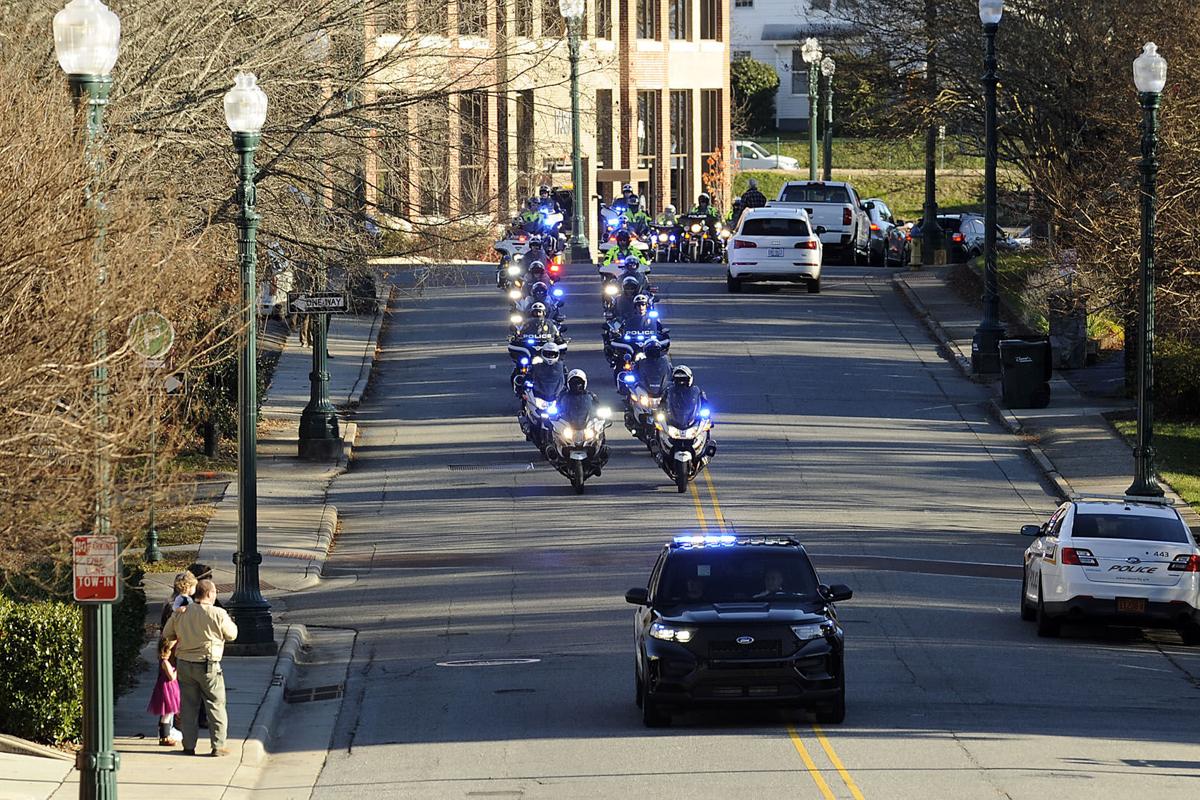 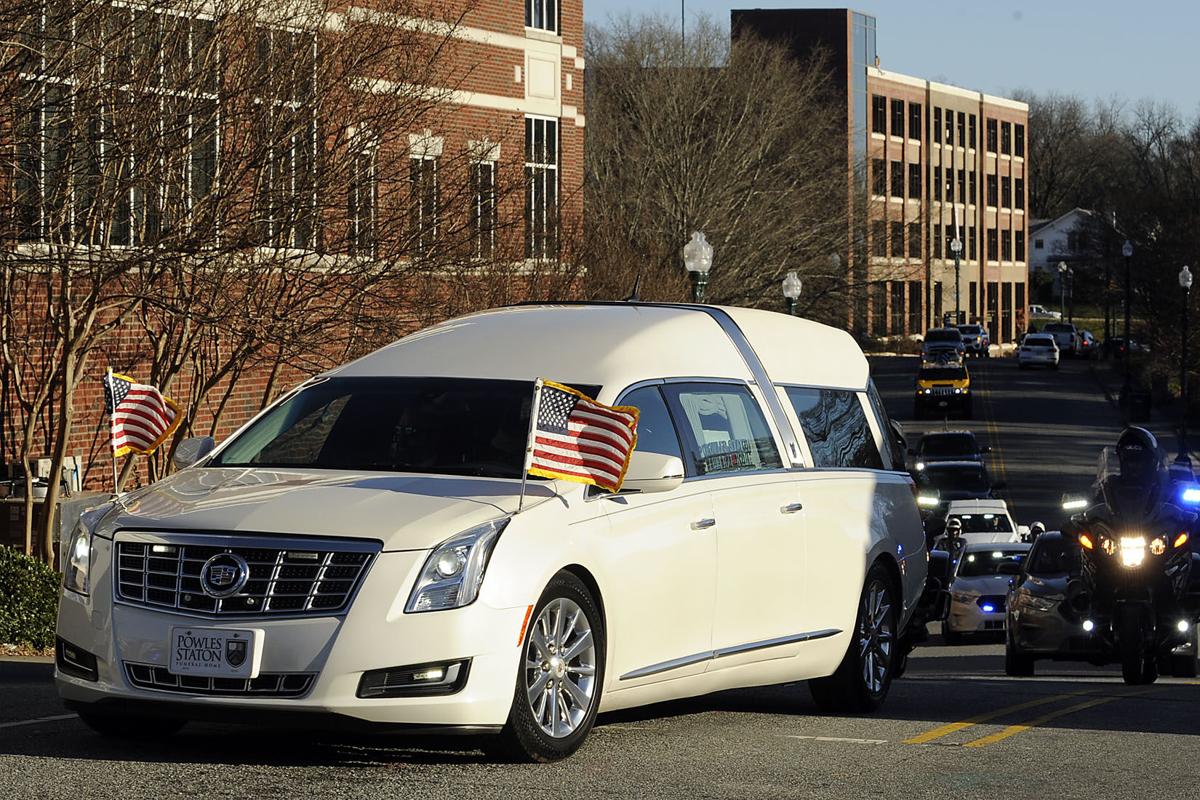 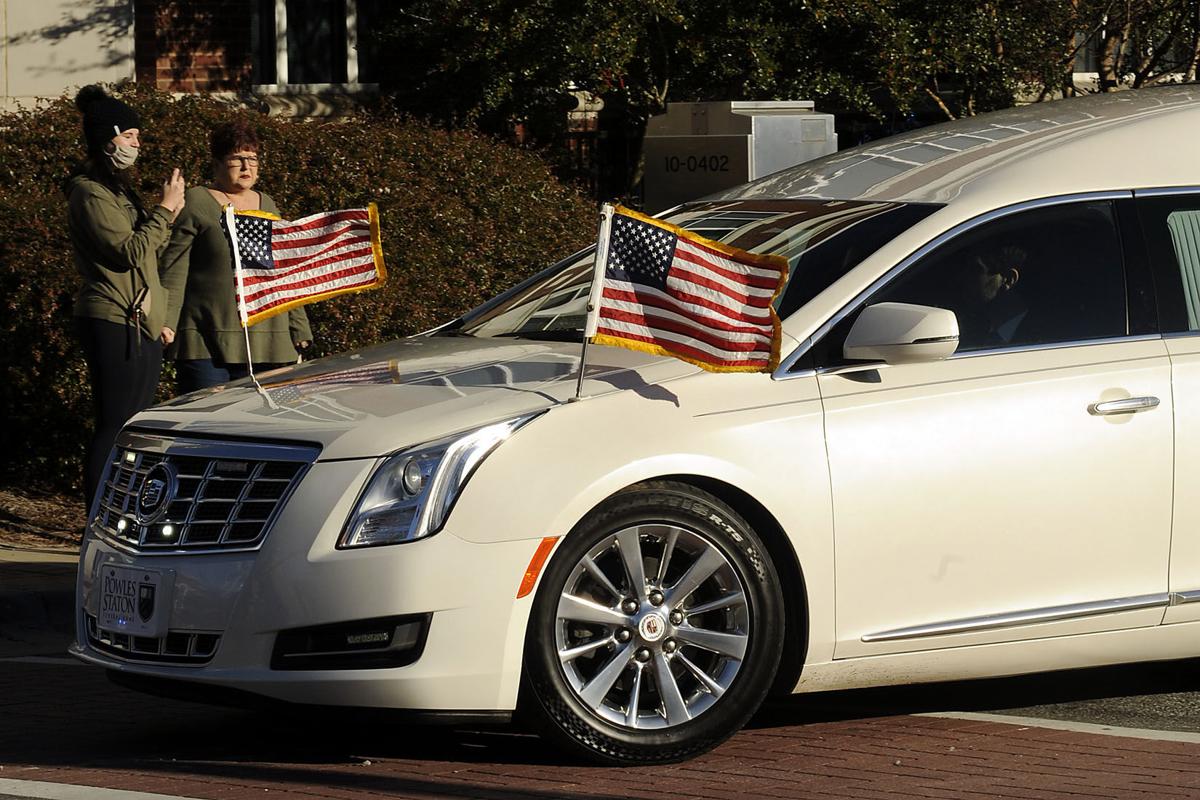 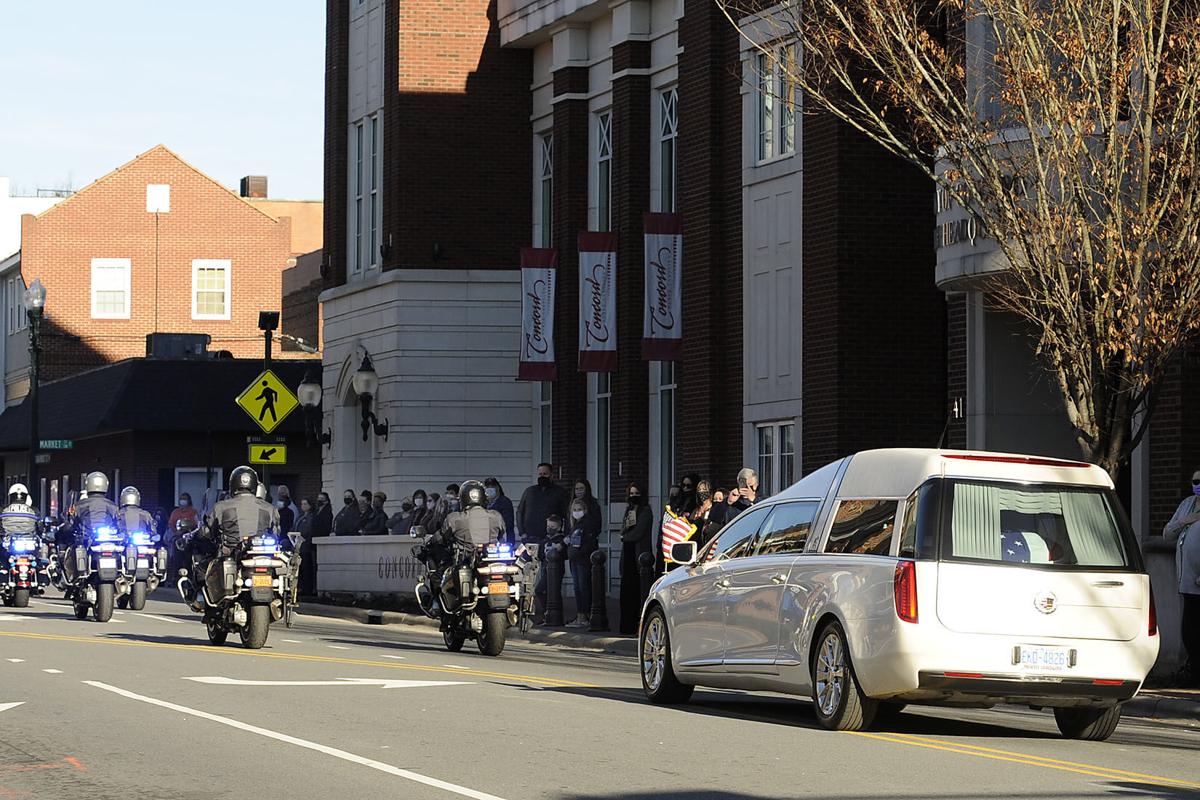 Family, friends and fellow law enforcement officers said their final goodbyes Tuesday to a Concord police officer who died in the line of duty last week.

Officer Jason Shuping was buried with full honors at Shiloh Reformed Church in Faith following a funeral service at the Cabarrus Arena and Events Center.

Before the service, Concord police, as well as law enforcement officers from across the country, escorted Shuping’s body from Powles Funeral Home in Rockwell to the arena. They were joined by several other emergency responders and 911 communicators from across the region.

The Concord Police Department had asked the public to line the streets while Shuping’s body was escorted to the funeral and his final resting place.

Shuping’s body rode past the Concord Police Headquarters one last time before heading the cemetery for a private burial. The memorial at headquarters has grown and includes many badges from police and sheriff offices from across the country.

The 25-year-old police officer was shot and killed last Wednesday night outside of Sonic Drive-In near Concord Mills. Officer Kaleb Robinson was also hurt in that shooting, but survived.

A memorial has been growing outside the Concord Police Department headquarters, where Shuping is being remembered for his bravery and ultimate sacrifice.

Shuping was also a former Boy Scout and a member of the Shiloh Reformed Church of Faith, where he was part of the Shiloh Ringers Handbell Choir. He also volunteered with Bible School and with youth and adult mission trips.

According to his obituary, Shuping was an avid sportsman who enjoyed hunting and fishing. He also loved to hang out with his family and vacationing in Wilmington.

“Many words could describe him, but ‘hero’ and ‘humble’ would be the most accurate,” the obituary read.

Shuping leaves behind a wife, his mother and father, brother, sister and half-sister, and several nieces and nephews.

The City makes a statement

“Today we join together as a community to honor the life of Concord Police Officer Jason Shuping, who was killed in the line of duty last week. Officer Shuping dedicated his life to protecting and serving our community, and we are heartbroken about his tragic death as well as the shooting of his fellow officer, Kaleb Robinson. Jason made the ultimate sacrifice and, for that, we will be forever indebted … and he will be forever remembered.

“The commitment of the Concord Police Department to this community is unwavering and invaluable. Today, as we celebrate the life of Jason Shuping, we also honor the men and women of the CPD who selflessly serve all of our residents. We, as a community, and specifically, as the leadership of this great City, will do whatever humanly possible to ensure the safety and wellbeing of each and every one of our CPD officers. We will support Chief Gacek and the Department through this difficult time and in the days and months ahead and ask that you do the same. Likewise, we will be in prayer for Officer Shuping, his wife, family, and friends, as well as for Officer Kaleb Robinson and his family.

“This is a terrible tragedy felt by all of us in Concord, but it is also a time that brings out the best in us. The outpouring of support for our community that has come from neighboring communities, the Governor, and officers throughout the state has been overwhelming. We hope that it brings some measure of comfort to Jason’s family, friends, and fellow officers, to whom we offer both our deepest condolences and our gratitude for Jason’s service.”

Turn a blue light to honor his memory

The Chamber, Leading Business in Cabarrus, will be distributing blue light bulbs encouraging residents to burn them in their outside light fixtures and Light the Night Blue in memory of Concord Police Officer Jason Shuping and show support for our police officers.

“Our community loves and supports our law enforcement officers, and the death of Officer Jason Shuping has been devastating for all of us,” said Barbi Jones, executive director, The Chamber, Leading Business in Cabarrus. “Our officers do so much to serve and protect this community, we wanted to show them how much they are loved and appreciated. We hope all will partner together to light the night blue.”

Residents are encouraged to burn the blue light bulbs until Jan. 23, and then remove them to use again May 9 – 15, National Police Week.

Lowe’s Home Improvement and GE that generously donated the bulbs.

Concord Police Officer Jason Shuping's funeral was Tuesday, Dec. 22, 2020. He was killed in the line of duty. The processional to the cemetery…

Movies in a Minute: "The Little Things"

Motorcycle police lead the hearse with Jason Shuping's body up Sprint Street during the processional.