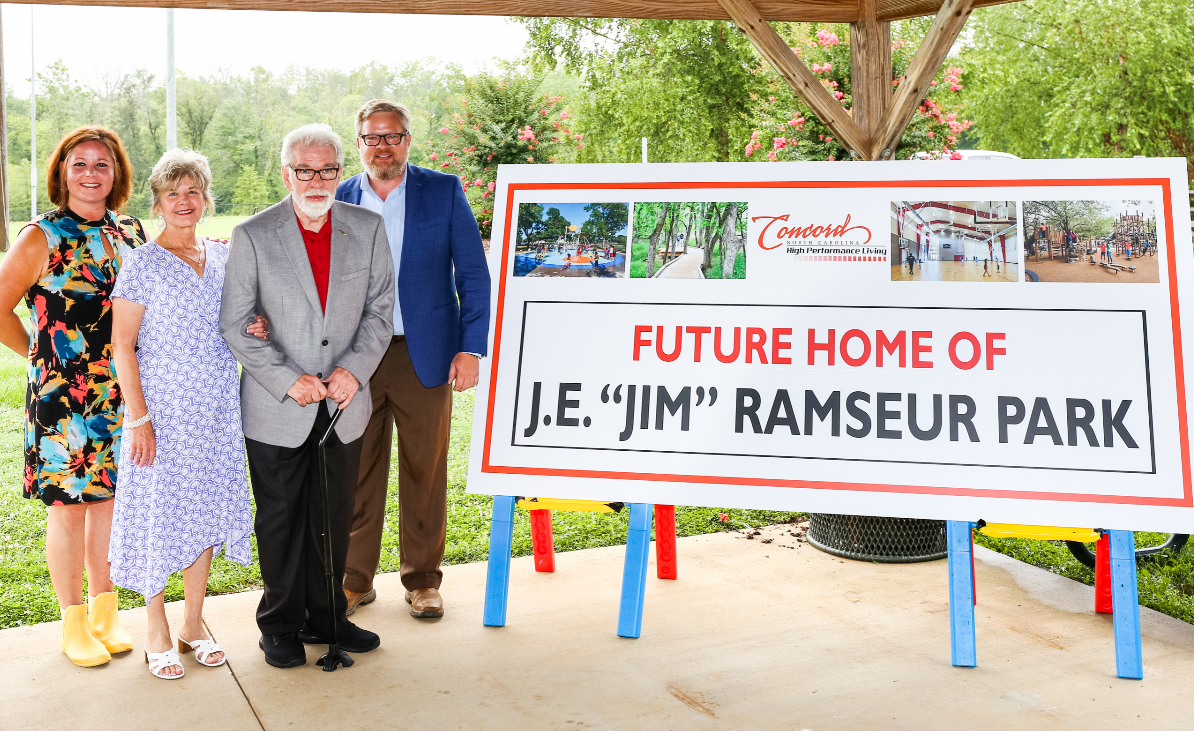 Concord is naming the Northwest Park after former council member J.E. “Jim” Ramseur, who served on City Council from 1995 to 2015.

The city of Concord officially announced the name of the future northwest park during a ceremony honoring former council member Jim Ramseur. The city’s first park in northwest Concord will formally be known as the J.E. “Jim” Ramseur Park.

After serving in the United States Air Force, Ramseur dedicated himself to public service for 31 years through elected and appointed boards and commissions, most notably by serving on City Council for 20 years from 1995 to 2015. In appreciation of his service to the community, the City Council requested that the future park be named in his honor.

“Jim is someone who believes in Concord and has believed in our city his whole life,” said Mayor Bill Dusch. “He has always recognized our city’s potential for development, making the naming of this new park a fitting tribute to his service and dedication.”

The Concord Parks and Recreation Department hosted a private naming ceremony at Cox Mill Elementary to honor Ramseur. During the event, Mayor Dusch highlighted many of Ramseur’s achievements and contributions.

As a member of City Council, Ramseur was instrumental in helping the city strategically plan for its anticipated growth, while also advocating for more parks and greenways to better serve the growing population. He played a key role in the opening of Dorton Park, Hector Henry Greenway, McEachern Greenway Extension, the downtown greenway connector, and the Weddington Road Bark Park.

“Jim and I served together for a long time in elected office, but I’ve known him for more than 50 years,” said Padgett. “There is nobody that loves Concord any more than Jim Ramseur. Over the last 50 years, he has left an imprint everywhere with his influence.”

Padgett spoke of Ramseur’s love for Concord and unrivaled knowledge of the city’s history. Ramseur was responsible for the renaming of many city streets, such as Concord Parkway, and influential in the construction of city facilities such as the Brown Operations Center, City Parking Deck and City Hall. Padgett also spoke of Ramseur’s tremendous pride for the city, recalling how Ramseur pushed local television stations to include Concord on the weather radar maps during the broadcast.

“We would not be successful, and Concord would not be where it is today without Jim’s guidance, which was always about being pragmatic, don’t get too far ahead of the people you’re leading, take things in stages, and be fiscally responsible,” said Padgett.

Ramseur is a Concord native and seventh generation Cabarrus County Lutheran. He graduated from Concord High School in 1964 and attended the University of North Carolina at Charlotte. He lives with his wife Terry, and he has two children, JD Ramseur and Beth Ramseur Myers.

Background on the Jim Ramseur Park

One of the recommendations of the Comprehensive Parks and Recreation Master Plan, adopted by City Council in 2017, was to serve the city with a new community park in the northwest region. This is one of the fastest-growing areas of the city, and with that growth is the need for increased services and programs.

The city purchased the site of the future Jim Ramseur Park in 2020. The park is currently in the development and design phase.

The city has completed two public input surveys on the park, which received over 1,000 responses and over 500 written comments. The public’s input is being used to help guide and drive development of the new park.

The future park will assist Parks & Recreation in providing programs, activities and events for ages 3 and up.

Amusing moment elephant drinks from a water hose like a human

Amusing moment elephant drinks from a water hose like a human

Concord is naming the Northwest Park after former council member J.E. “Jim” Ramseur, who served on City Council from 1995 to 2015.