Watch now: Biden and Trump face off in their final debate

A Harrisburg council member has expressed concerns that the Racial Equity Task Force is in violation of North Carolina’s Open Meetings Law.

Dellinger had also sent an email to Koch before the council meeting to discuss his concerns without the knowledge of other council members.

“‘Official meeting’ means a meeting, assembly or gathering together at any time or place or the simultaneous communication by conference telephone or other electronic means of a majority of the members of a public body for the purpose of conducting hearings, participating in deliberations, or voting upon or otherwise transacting the public business within the jurisdiction, real or apparent, of the public body. However, a social meeting or other informal assembly or gathering together of the members of a public body does not constitute an official meeting unless called or held to evade the spirit and purposes of this Article.”

Council member Troy Selberg stated that he was also concerned about whether the task force was subject to the Open Meetings Law. In an interview with the Independent Tribune, he said his concerns stemmed from the number of council members attending the meetings.

He said that at one meeting, four members were present, which would have the majority of the town council members present, making the task force meeting subject to Open Meetings Law. He said he wanted clarity if the task force was subject to the law so that the task force could continue its work without issue.

With COVID-19, meetings are held virtually, and it is easy for council members to log onto a meeting and potentially not realize three members are already present. He said that, as council members, they need to make sure they follow state law.

“My concern is just making sure that as a government body, we are following the statutes of the state of North Carolina,” he said to the Independent Tribune.

During the council meeting, Selberg said that several town boards and committees had started in a similar fashion to the task force, where council members were present with residential volunteers. The Sustainability Committee, which recently was approved as a town board, had a similar start.

Dellinger also asked if the task force would be made into an official town board.

“I appreciate the inclusiveness of this task force, and as a reminder, a task force is a temporary grouping under one leader for the purpose of accomplishing a definite agenda.” He continued: “I know, mayor, you said at the very first meeting that you had eventually hoped this would become an advisory board or some type of board with its own bylaws.”

In the meeting, Sciascia said the task force needed to remain a task force, for now.

“From my perspective, right now this needs to be a task force. I don’t know that we have enough information to be an actual board,” he said. “Our goal was to understand the systems — the systems being the schools, medical, judicial system, our police system — to understand what the numbers are from a Harrisburg perspective and a Cabarrus County perspective to determine if we have a problem. And if we have a problem, we influence changes around those problems.”

It was not clear, based on Dellinger's statements at the council meeting, what the reason for his concern was. The Independent Tribune reached out to Dellinger about his concerns regarding the task force, but he declined to comment.

A disagreement among the council

There was some disagreement among council members and the town attorney as to whether the task force qualifies as an official meeting subject to Open Meetings Law.

Koch said that any public body of the town that is conducting town business needs to abide by the public meeting law.

“It sounded to me like the task force was sort of like — not a permanent public body connected to the town — but a temporary one, and as such, it would be subject to the Open Meetings Law of North Carolina,” he said. “Anybody looking at that from the outside would think it's a town board.” He later said: “If it looked to an outside citizen like this is part of the town, then you treat it like part of the town.”

When the task force was formed June 10, only three council members volunteered to be a part of it: Dellinger, Selberg and Councilman Rick Russo. Council member Ron Smith agreed to be an alternate. Diamond Staton-Williams was to act as a consultant for the task force, but would not be required to attend meetings.

Since then, Russo has not attended all meetings. Staton-Williams has attended meetings with Selberg and Dellinger when Russo could not attend.

Only three council members need to be in attendance at each meeting, the mayor said during the council meeting.

“Three of you volunteered and one as an alternate, so those are really the only three that should be attending, and the alternate needs to find out if one of the other three are not,” he said. “We should not be violating open meeting laws with that.”

The mayor agreed during the council meeting to have minutes taken for the task force meetings and also agreed to post a notice of their meetings to the town’s website.

Residents already had some access to the task force meetings. Since the task force held its first meeting, the mayor has offered, during monthly council meetings, to send the task force Zoom link to any interested resident.

Similar concerns stated in an email

Dellinger had also sent an email to the mayor and the task force in August asking similar questions to those he posed in the council’s monthly meeting. His first set of questions, Dellinger wrote, were from a resident.

“Based on the resident’s questions:

1. Can anyone attend the Zoom virtual meetings? Once we return to in-person meetings, will the public be able to attend in person?

2. Will those not part of the Task Force be able to ask questions at some point during the meetings?

3. Will the meetings going forward be able to be recorded and/or where can the community find agenda/minutes of the meetings?

4. Is there a plan to add any information to the town’s web page about the Task Force?”

These questions reference actions similar to requirements of the Open Meetings Law. The mayor responded to the questions and opened it to the task force to also chime in.

He said that the public can attend the meetings. Outside of the three council members and the mayor, the task force is made up of about 20 residential volunteers. The mayor also said attendees can ask questions or make comments.

As for the question of keeping minutes, the mayor has kept general minutes of the meetings and has sent them to all council members and task force members. In an email, the mayor agreed to have someone take minutes. In a responding email, Councilwoman Staton-Williams asked if Dellinger would take minutes for the task force. He declined.

The history behind it

The town's Racial Equity Task Force was originally created as a product of the deaths of George Floyd, Breonna Taylor, Ahmaud Arbery and others this year. It was also formed after Smith filed a complaint against Staton-Williams, stating that her email exchange with Council member Ian Patrick discussing the town’s statement on Floyd’s death violated the council’s code of conduct.

That complaint has never been dropped.

During the email chain discussing the statement, Dellinger, Patrick and Smith did not support the town’s statement on Floyd's death.

Dellinger volunteered to be a part of the task force in the council's meeting June 10 when the mayor formed it. Before he volunteered, he made a few remarks. In those, he stated:

“I am willing to be a part of this committee because my expectation is that it will be a committee with dialogue. If I am to be told how I should feel or what I am to believe and how I should think, this will not work. If calmness and peace shall reign, much will be accomplished.”

In an email to the mayor and the task force, he reiterated that statement.

“When I agreed to be on this task force, I said it would work if it was a dialogue, and I was not going to be told what to do or how I should think. If given that respect, I will in turn provide respect.”

The task force has been collecting data from the Cabarrus County Sheriff’s Office and from Cabarrus County School Systems. It has also held discussions with Sheriff Van Shaw and Lt. Chris Measimer.

The mayor told the Independent Tribune in an interview that, as far as he has been told, members of the task force have no complaints about the dialogue so far and have appreciated the candid discussions with county officials.

CABARRUS COUNTY — When students walk into class Monday, Christin McDowell will not be on campus and she won’t be teaching.

NOTE: There is a word in this story that many readers will find offensive, but it is included because it is critical to the story.

CONCORD – Cabarrus County will open most of its facilities to the public on Monday at 8 a.m. While the buildings are open, the county will con…

CABARRUS COUNTY — Members of the public had a lot of good things to say at the Cabarrus County Board of Education’s regular meeting Monday, bu…

Watch now: A closer look at the Portland Place confrontation

Watch now: A closer look at the Portland Place confrontation 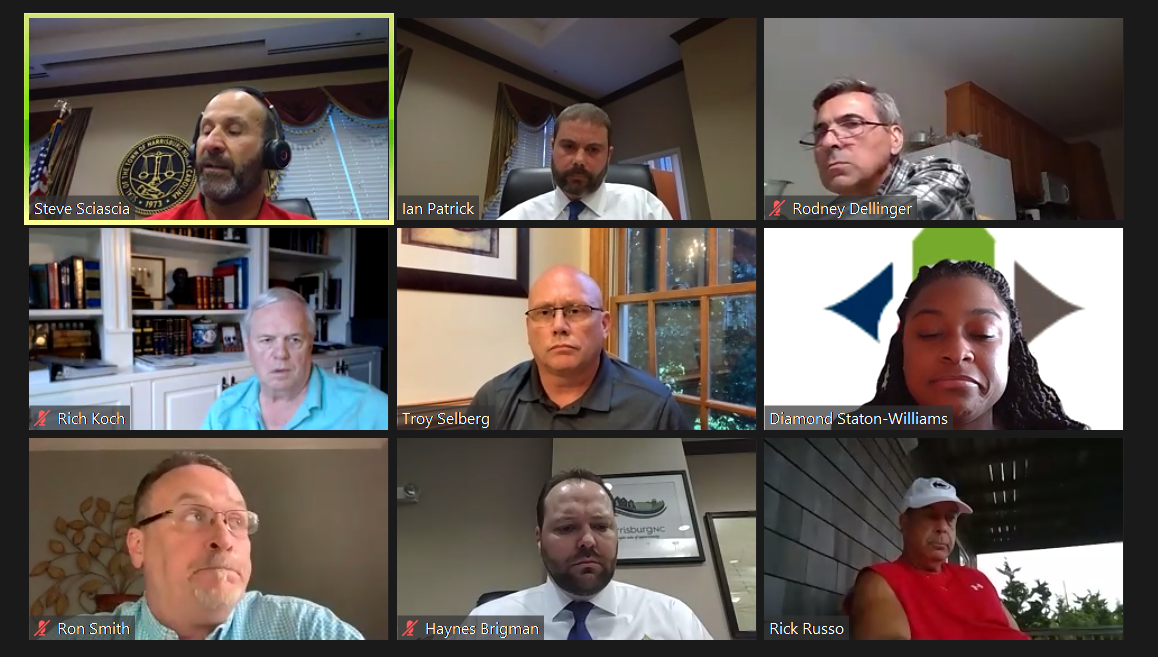 During the Harrisburg Town Council meeting, Council member Rodney Dellinger expressed concerns over the Racial Equity Task Force and its compliance with North Carolina's Open Meetings Law. There was a disagreement among council members and the town attorney as to whether the task force was subject to the law. 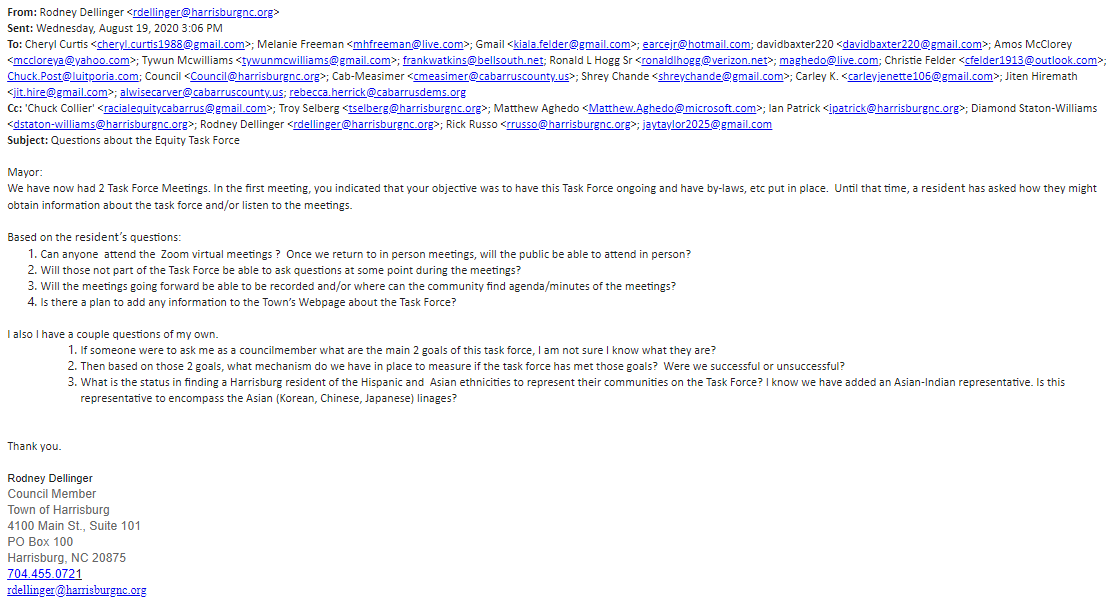 Council member Rodney Dellinger emailed Mayor Steve Sciascia and the Racial Equity Task force in August to ask a few questions. Some were his own, and some, he said, came from a resident. 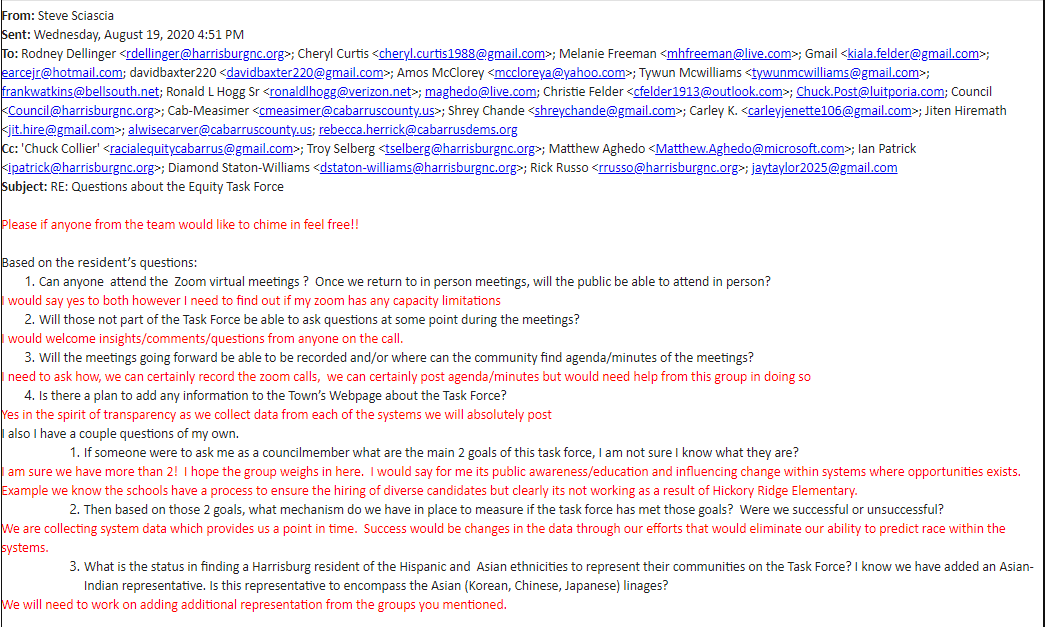 Mayor Steve Sciascia responded to Council member Rodney Dellinger's email and answered his questions, opening up any further answers to the rest of the task force. 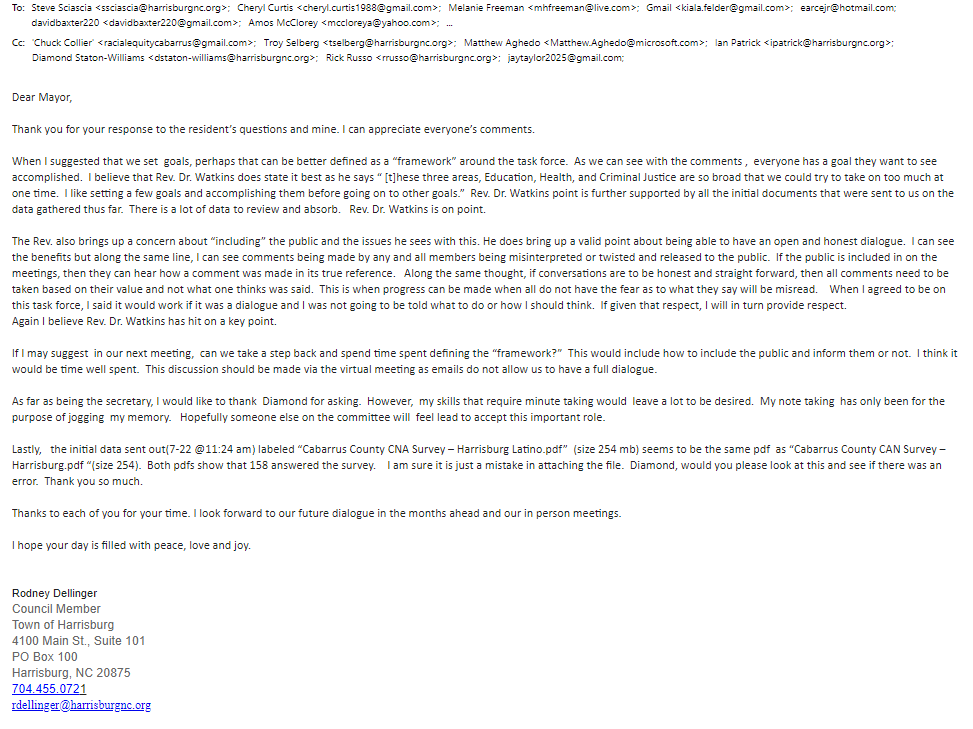 Council member Rodney Dellinger thanked the task force and Mayor Steve Sciascia for their answers. He also reiterated a statement he made when first volunteering to join the task force.