An organization that rides in a cross-country memorial for officers fallen in the line of duty made a stop in Concord to honor the late Officer Jason Shuping and his family.

The Beyond the Call of Duty — End of Watch Ride to Remember pulled up in front of the Charlotte Motor Speedway with a trailer covered with more than 300 faces and names of officers who died in the line of duty in the country in 2020. End of Watch Ride to Remember is a group of motorcycle riders from Spokane Valley, Washington, that escorts a 41-foot trailer across the country.

Jagrut “J.C.” Shah founded the group in 2020 to honor fallen officers and create a network of officers and surviving family members for healing.

“I wanted the departments to know that their loss is being felt across the nation, not just per department,” Shah said. “And being able to allow the officers to see all the men and women that were lost on the job. The same thing with survivors, letting them know that their hurt is felt by other survivors. It is painful, but if we can find some peace in introducing other survivors to survivors, it’s worth it.”

During the group’s stop at the speedway, Officer Jason Shuping’s wife and parents were present, taking time to view the trailer and the faces on it. Next to the door on the right side of the trailer, Officer Shuping’s face was found among hundreds of others who died in the line of duty in 2020.

On Dec. 16, 2020, Shuping was killed in the line of duty while responding to a call for service involving a vehicle crash. He was with the Concord Police Department for 1½ years before making the ultimate sacrifice in service to his community.

At the May 2021 City Council meeting, Concord Police Chief Gary Gacek posthumously awarded Shuping the Medal of Valor and a Purple Heart. The Medal of Valor is the Concord Police Department’s highest commendation and is awarded for exceptional bravery at the imminent risk of death or serious bodily injury that goes beyond the call of duty. The Purple Heart is awarded for serious bodily injury or death while confronting a criminal element during the course of police interaction with the public.

As the Shuping family, police officers and the public viewed the mobile memorial, the group’s road captain, Jason Vallieres, took a moment to talk about how the End of Watch Ride to Remember connects families and co-workers across the nation who have experienced the same loss.

This year, the group added two people to the trip. They were survivors who lost a loved one in 2019. Having them on the trip gives families who just lost a loved one an understanding ear, Vallieres said.

“That is just beautiful,” Vallieres said, “because they are able to talk to spouses and family members about how they have been dealing with things last year and what to expect and making friendships and letting those around them that they aren’t alone.”

For founder Shah, it was important to not only honor the officers’ memories, but to provide support to families and co-workers and create a network of people with similar experiences. Even after only a year, that mission has been successful.

But Shah wants the public to also attend these stops to see the faces of those who died protecting their communities.

“I hope it gives them a little peace knowing that their loved one is being recognized and honored,” Shah said, “not only in their community but across the nation, and that other families see them and learn about who they are.” 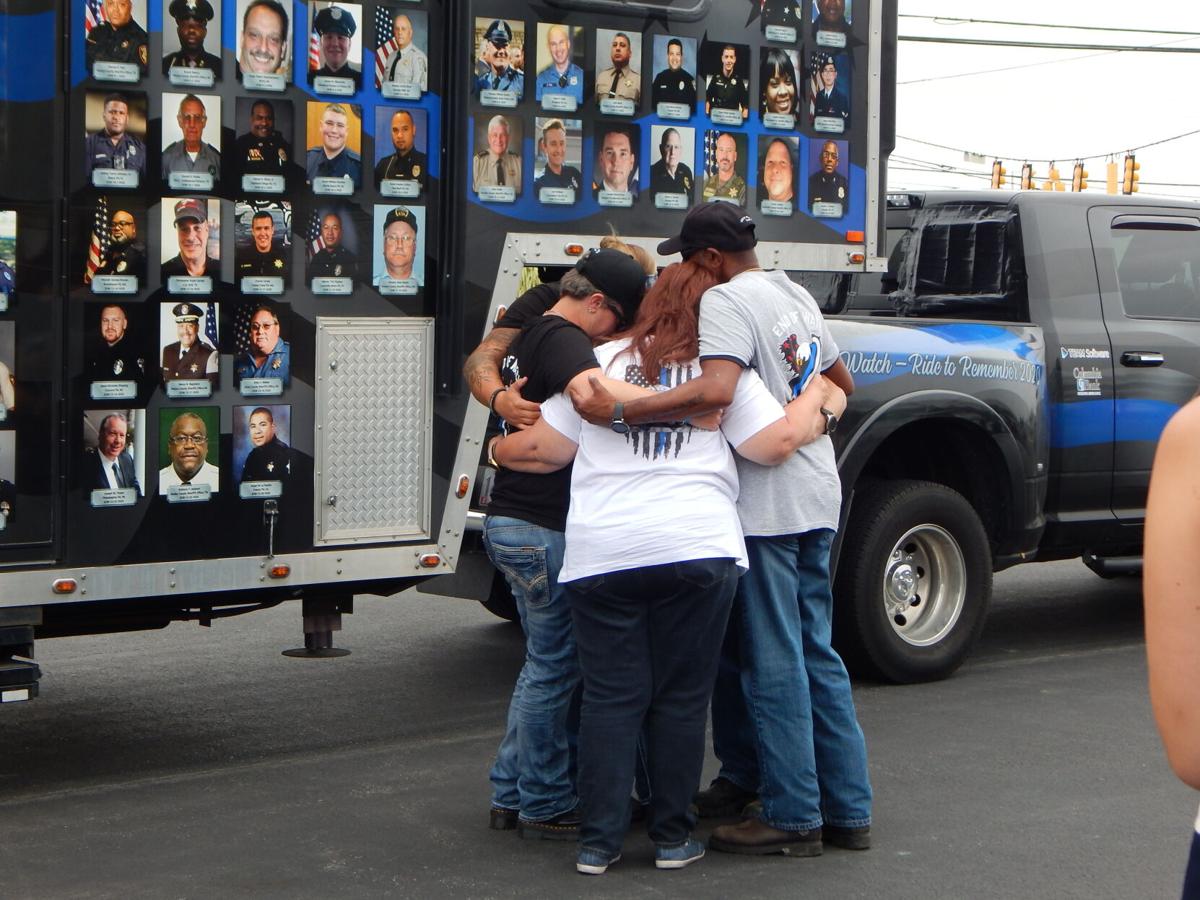 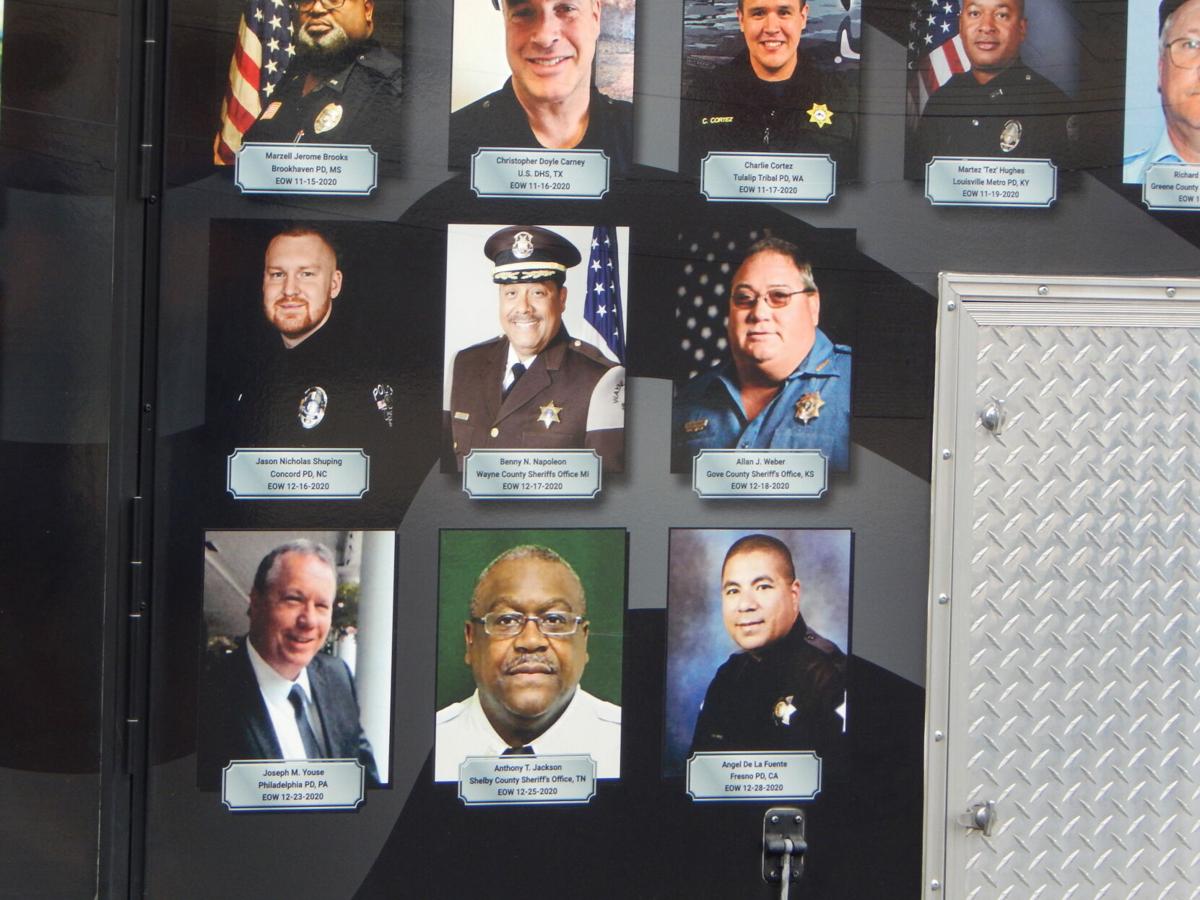 Officer Jason Shuping’s image was among the 339 fallen officers pictured on a 41-foot trailer memorializing those who died in 2020. 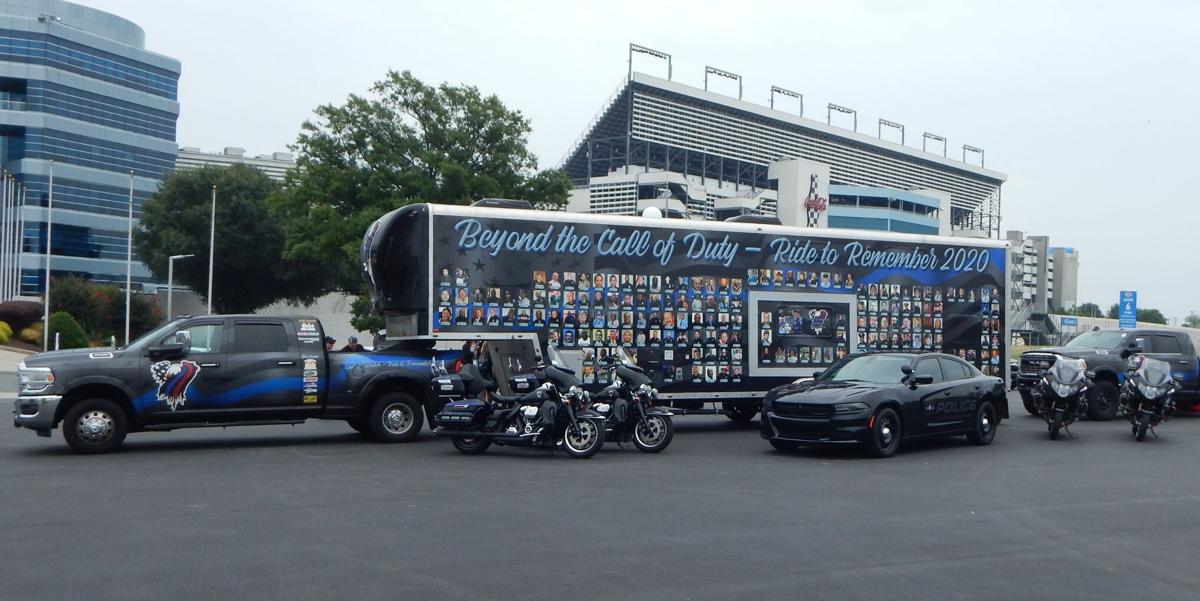 The group includes six motorcycle riders who travel with a 41-foot trailer across the country to visit cities and police departments to honor the men and women in law enforcement who paid the ultimate price in service to their communities.