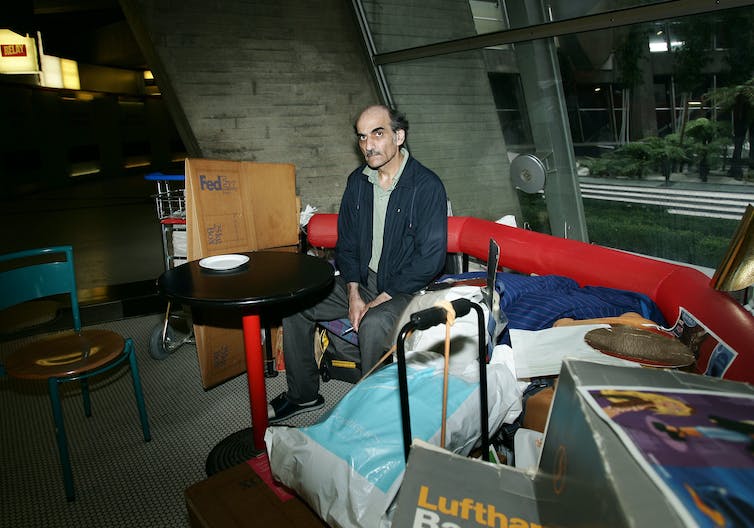 Mehran Karimi Nasseri sits among his belongings in a 2004 photograph taken at Charles de Gaulle Airport, where he lived for nearly 18 years. Eric Fougere/VIP Images/Corbis via Getty Images

In January, local authorities arrested a 36-year-old man named Aditya Singh after he had spent three months living at Chicago’s O'Hare International Airport. Since October, he had been staying in the secure side of the airport, relying on the kindness of strangers to buy him food, sleeping in the terminals and using the many bathroom facilities. It wasn’t until an airport employee asked to see his ID that the jig was up.

Singh, however, is far from the first to pull off an extended stay. After more than two decades studying the history of airports, I’ve come across stories about individuals who have managed to take up residence in terminals for weeks, months and sometimes years.

Interestingly, though, not all of those who find themselves living in an airport do so of their own accord.

Blending in with the crowd

Whether it’s in video games like “Airport City” or scholarship on topics like “airport urbanism,” I’ll often see the trope that airports are like “mini cities.” I can see how this idea germinates: Airports, after all, have places of worship, policing, hotels, fine dining, shopping and mass transit.

But if airports are cities, they’re rather strange ones, in that those running the “cities” prefer that no one actually takes up residence there.

Nonetheless, it is possible to live in airports because they do offer many of the basic amenities needed for survival: food, water, bathrooms and shelter. And while airport operations do not necessarily run 24/7, airport terminals often open very early in the morning and stay open until very late at night.

Many of the facilities are so large that those determined to stay – such as the man at O'Hare – can find ways to avoid detection for quite some time.

One of the ways would-be airport residents avoid detection is to simply blend in with the crowds. Before the pandemic, U.S. airports handled 1.5 million to 2.5 million passengers on any given day.

Once the pandemic hit, the numbers dropped dramatically, falling below 100,000 during the early weeks of the crisis in the spring of 2020. Notably, the man who lived at O'Hare for a little over three months arrived in mid-October 2020 as passenger numbers were experiencing a rebound. He was discovered and apprehended only in late January 2021 – right when passenger numbers dropped considerably after the holiday travel peaks and during the resurgence of the coronavirus.

Of course, not all of those who find themselves sleeping in a terminal necessarily want to be there.

Travel by air enough and chances are that, at one time or another, you’ll find yourself in the category of involuntary short-term airport resident.

While some people may book flights that will require them to stay overnight at the airport, others find themselves stranded at airports because of missed connections, canceled flights or bad weather. These circumstances seldom result in more than a day or two’s residency at an airport. 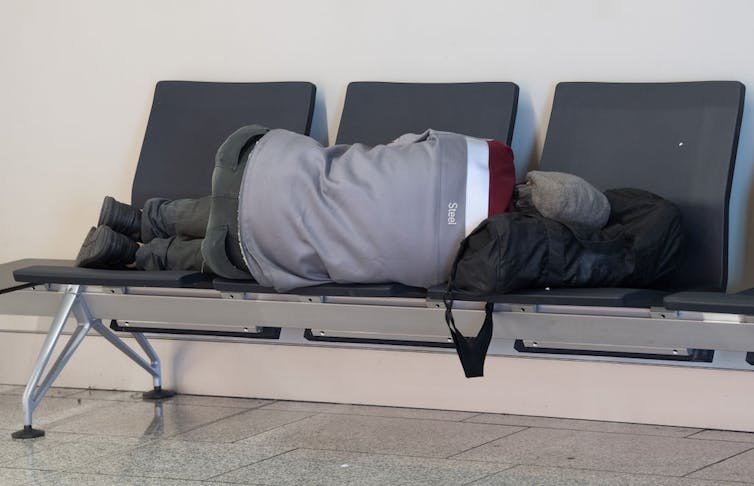 It might not be the most comfortable bed, but at least it’s indoors. Boris Roessler/picture alliance via Getty Images

Then there are those who unwittingly find themselves in an extended, indefinite stay. Perhaps the most famous involuntary long-term airport resident was Mehran Karimi Nasseri, whose story reportedly inspired the movie “The Terminal,” starring Tom Hanks.

Nasseri, an Iranian refugee, was en route to England via Belgium and France in 1988 when he lost the papers that verified his refugee status. Without his papers, he could not board his plane for England. Nor was he permitted to leave the Paris airport and enter France. He soon became an international hot potato as his case bounced back and forth among officials in England, France and Belgium. At one point French authorities offered to allow him to reside in France, but Nasseri turned down the offer, reportedly because he wanted to get to his original destination, England. And so he stayed at Charles de Gaulle Airport for nearly 18 years. He left only in 2006, when his declining health required hospitalization.

Other long-term airport residents include Edward Snowden, the NSA leaker, who spent more than a month in a Russian airport in 2013 before receiving asylum. And then there is the saga of Sanjay Shah. Shah had traveled to England in May 2004 on a British overseas citizen passport. Immigration officials, however, refused him entry when it was clear he intended to immigrate to England, not merely stay there the few months his type of passport allowed. Sent back to Kenya, Shah feared leaving the airport, as he had already surrendered his Kenyan citizenship. He was finally able to leave after an airport residency of just over a year when British officials granted him full citizenship.

More recently, the coronavirus pandemic has created new long-term involuntary airport residents. For example, an Estonian named Roman Trofimov arrived at Manila International Airport on a flight from Bangkok on March 20, 2020. By the time of his arrival, Philippine authorities had ceased issuing entry visas to limit the spread of COVID-19. Trofimov spent over 100 days in the Manila airport until personnel at the Estonian embassy were finally able to get him a seat on a repatriation flight.

While most involuntary airport residents long to leave their temporary home, there are some who have voluntarily attempted to make an airport their long-term abode. Major airports in both the United States and Europe have long functioned – though largely informally – as homeless shelters.

Though homelessness and the homeless have a long history in the United States, many analysts see the 1980s as an important turning point in that history, as many factors, including federal budget cuts, the deinstitutionalization of the mentally ill and gentrification, led to a sharp rise in the number of homeless. It is in that decade that you can find the earliest stories about the homeless living at U.S. airports.

In 1986, for example, the Chicago Tribune wrote about Fred Dilsner, a 44-year-old former accountant who had been living at O'Hare in Chicago for a year. The article indicated that homeless individuals had first started showing up at the airport in 1984, following the completion of the Chicago Transit Authority train link, which provided easy and cheap access. The newspaper reported that 30 to 50 people were living at the airport, but that officials expected the number could climb to 200 as the winter weather set in.

This issue has persisted into the 21st century. News stories from 2018 reported a rise in the number of homeless at several large U.S. airports over the previous few years, including at Hartsfield-Jackson Atlanta International Airport and at Baltimore/Washington International Thurgood Marshall Airport.

The coronavirus pandemic has added an additional public health concern for this group of airport denizens.

For the most part, airport officials have tried to provide aid to these voluntary residents. At Los Angeles International Airport, for example, officials have deployed crisis intervention teams to work to connect the homeless to housing and other services. But it’s also clear that most airport officials would prefer a solution where airports no longer operated as homeless shelters.

You’re smart and curious about the world. So are The Conversation’s authors and editors. You can get our highlights each weekend.

Janet Bednarek does not work for, consult, own shares in or receive funding from any company or organisation that would benefit from this article, and has disclosed no relevant affiliations beyond their academic appointment.

Woman with world's longest nails cuts them after nearly 30 years

The Texan who had the world's longest nails grown by a woman can finally open a door without fear after cutting them.

Coast Guard rescues 6, searching for more off Louisiana coast; queen back to work; decision on charges for ex-cop in Minnesota man's death. Get caught up.

American Airlines has apologized after a woman was told she couldn't board a flight from L.A. to Charlotte because of a vulgar word on her hoodie.

One of two police officers accused of pepper-spraying and pointing their guns at a Black Army officer during a traffic stop has since been fired, a Virginia town announced.

Trump plans to affirm his commitment to the Republican Party — and raise the possibility that someone else will be the GOP's next presidential nominee — in a closed-door speech to donors Saturday night.

Former NBA star Shaquille O’Neal surprised a smitten Georgia man when the gentle giant paid for his engagement ring at a jewelry store.

Why COVID-19 conspiracy theories persist, and how to prevent the next 'infodemic'

About 1 in 4 Americans still believe the pandemic was created intentionally. Read the story, then take our quiz to see if you can separate COVID-19 fact from social media fiction.

A San Diego Zoo employee was hospitalized Monday after being bitten by a venomous snake, officials said.

Giant decline in sea turtles seen off US West Coast

In less than 30 years, a study shows, the number of western Pacific leatherback turtles in the foraging population off California plummeted 80%.