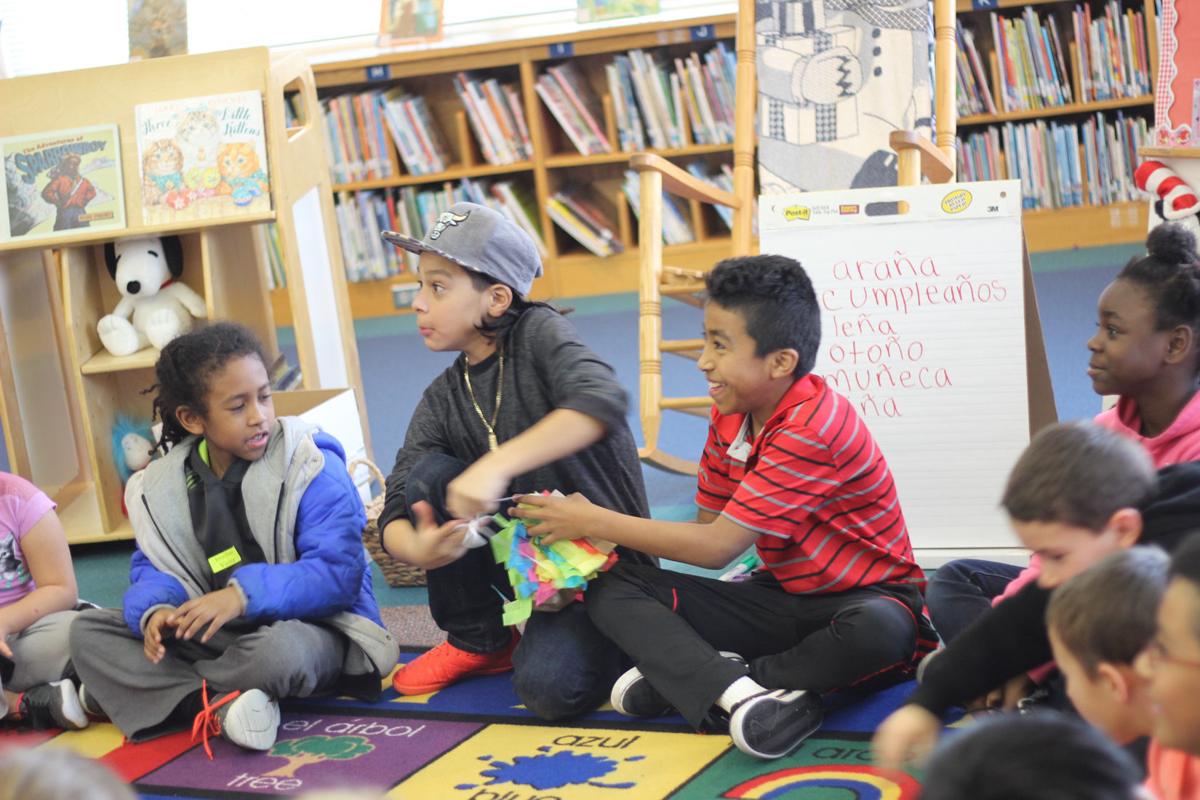 When the club met this month, the students played a game of hot potato with a piñata. Whoever was left with the piñata at the end got to keep it. 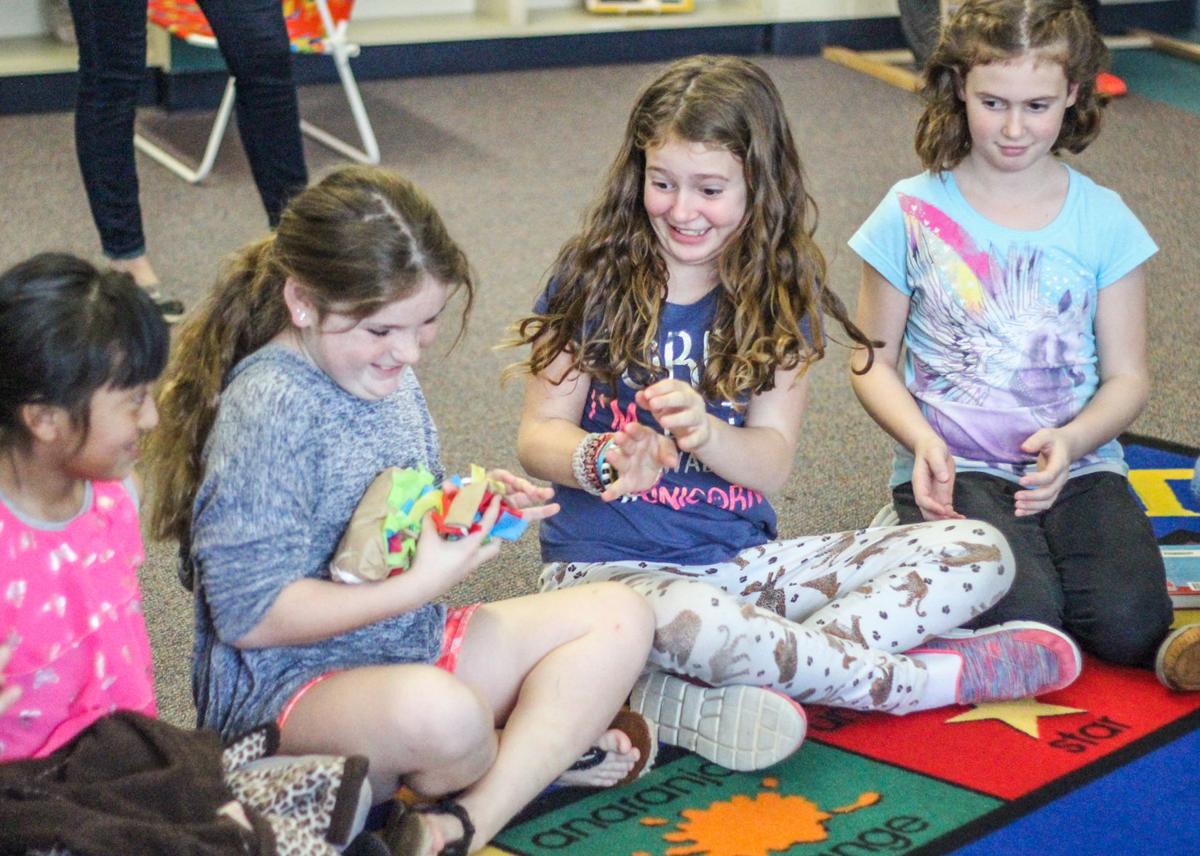 Students nervously pass the piñata during the game. 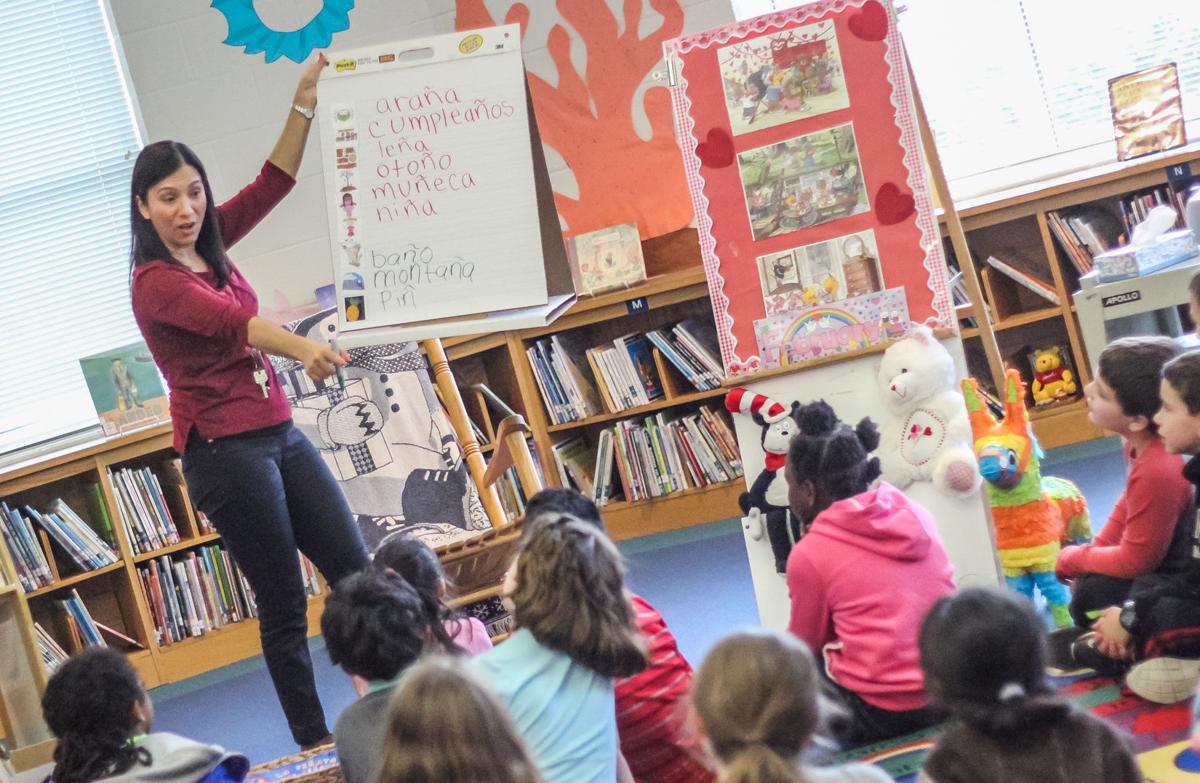 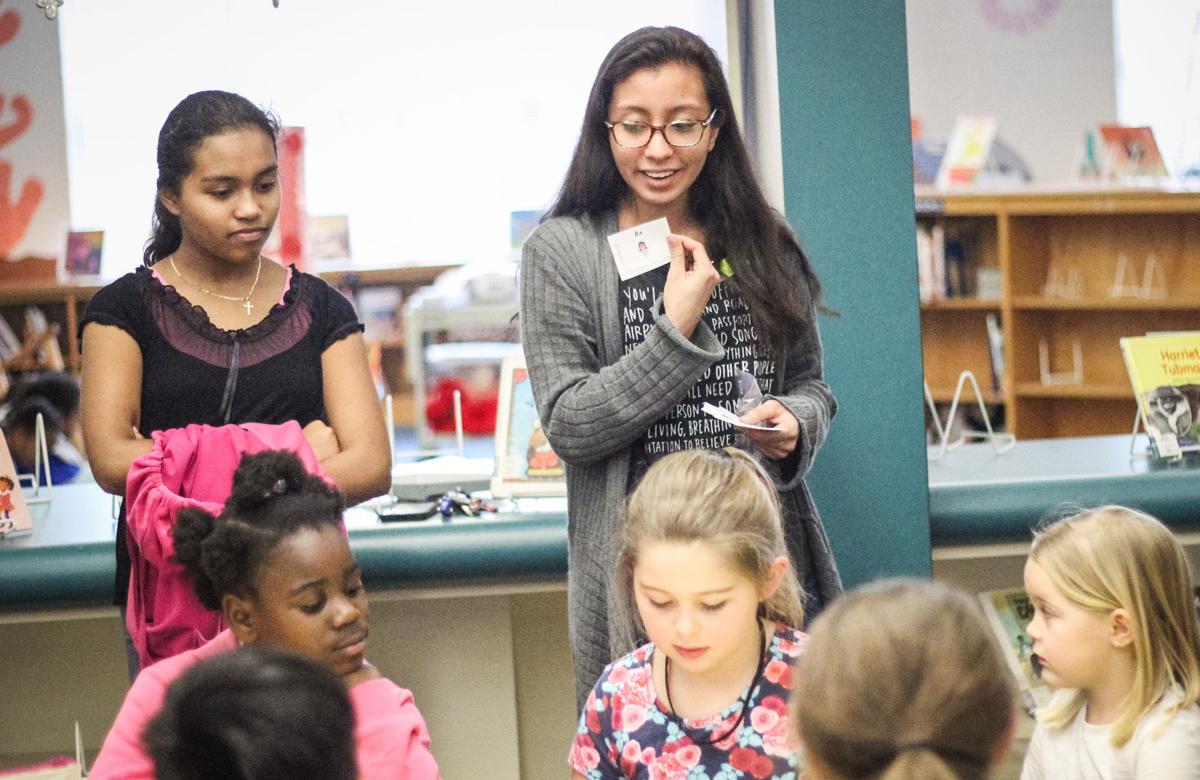 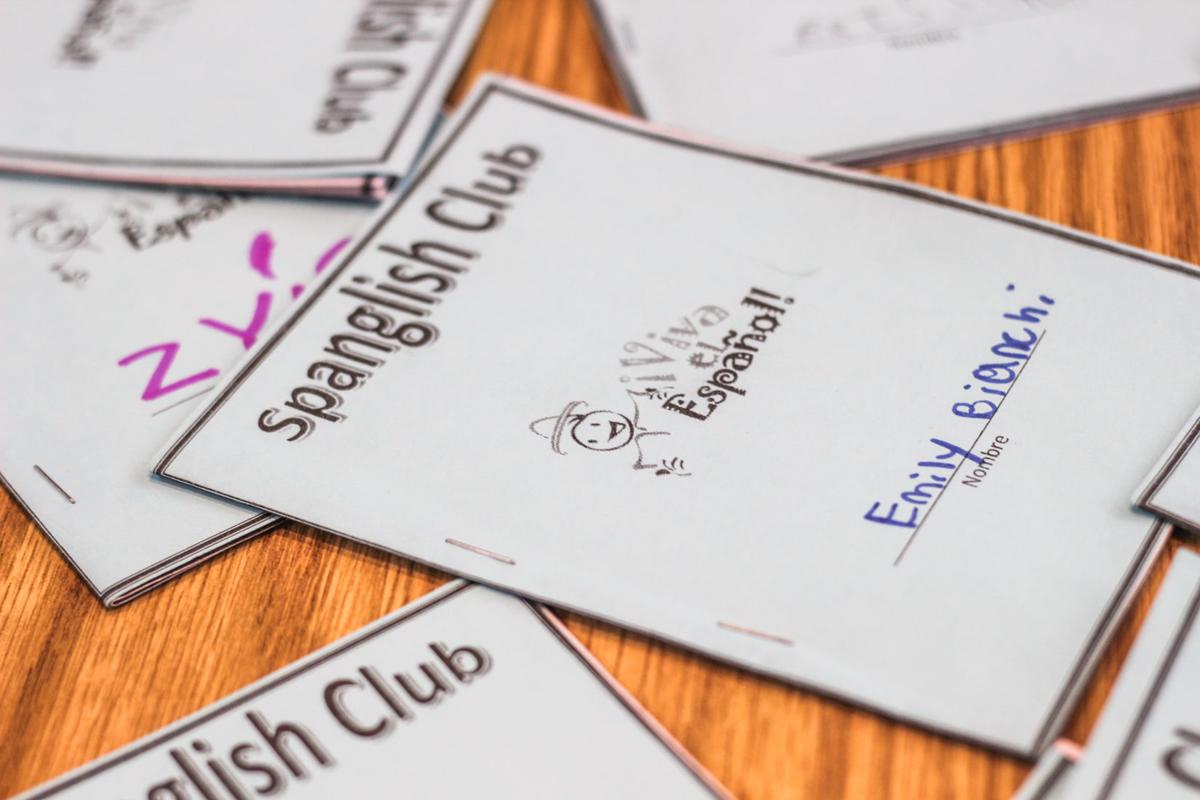 Each of the students received a passport books and get stamps every time they stay after school for the club. 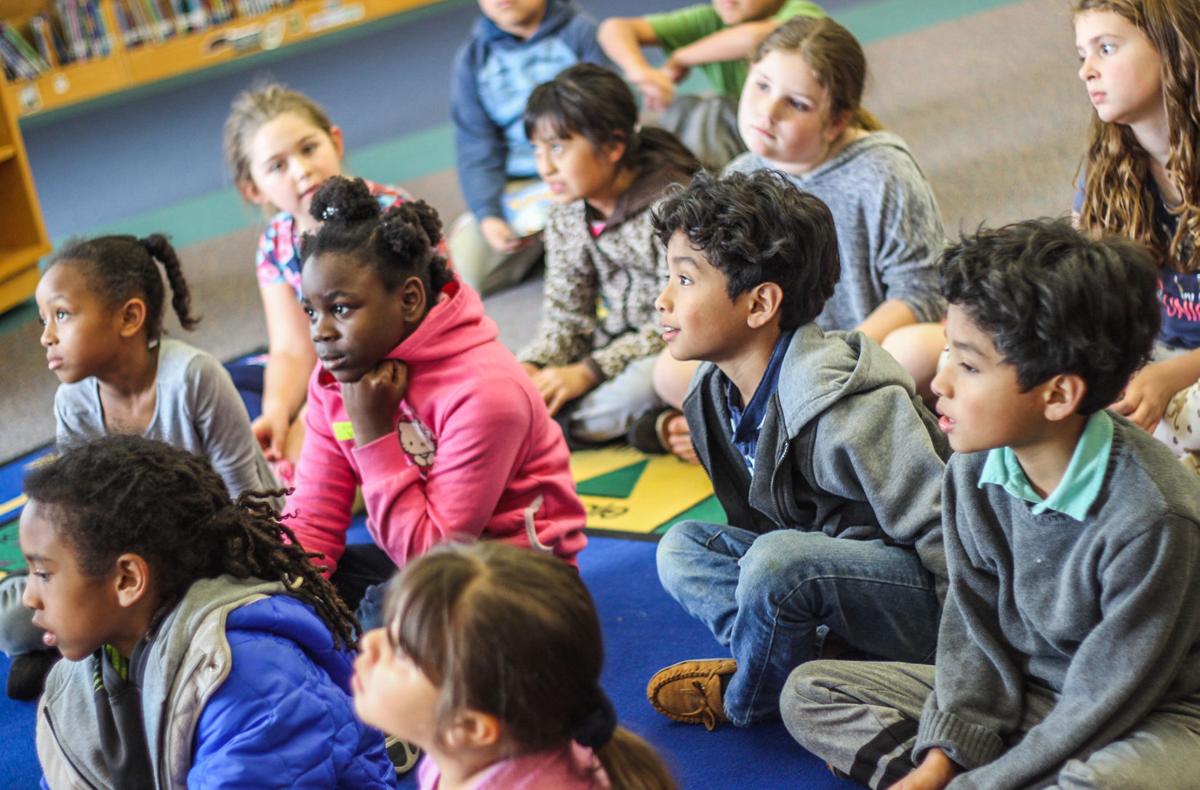 CONCORD- Students of all ethnicities confidently answered questions about Spanish vocabulary words after school at W.M. Irvin Elementary last week. As Emily Francis, the school’s English as a Second Language teacher, pointed to words like piñata, leña and cumpleaños, students as young as five worked on the correct pronunciations and meanings.

Once a month students in kindergarten- third grade that want to improve their Spanish skills stay after school for Spanglish Club, facilitated by Francis and students from Concord High School.

They play games, read stories, sing songs, make crafts and do plenty of other social activities to help students learn the language.

The club began in October and is an International Baccalaureate (IB) personal project for Concord High sophomore Grace North.

“I was wanting to do something that involves other cultures because I’m interested in that,” North said. “A lot of people have been coming consistently. I think it has been successful. I was surprised at how many people showed an interest in coming.”

North’s mother is the nurse at W.M. Irvin Elementary which is why she selected the school. She and other volunteers from the high school attend each meeting and assist Francis with the curriculum.

“We split them into groups and play games,” North said. “We found that doing games would intrigue them and help them learn.”

When the club began, Francis decided it should be catered toward the lower grades. She also said it was a good start to get ready for the school’s upcoming shift to an IB next year. At that time, the school will offer a Spanish Immersion option beginning with kindergarten classes.

“This is a way of offering an after school program for kindergarten through third grade. We have programs for older students but I wanted to do something where they have something to do after school,” Francis said. “This is for them to have fun and learn a language and make sure they are immersed in it.”

She decided to call it Spanglish Club because she said that is how Spanish speaking households are today. She said many Spanish-speaking students speak a mixture of English and Spanish at home.

This month, students played vocabulary bingo and discussed piñatas. Each student made their own mini piñata and the session ended with a piñata party.

The club also recently received a grant from the Cabarrus County Education Foundation that will purchase books for the students. Francis said each student will be given a bilingual book which allows her to incorporate literature and writing in the lessons.

Along with the volunteers from Concord High, Francis has also recruited some bilingual fifth-grade students to assist with facilitation.

One of those students is Marlinne Cisneros who said she likes being a leader.

“I will learn from being a leader by helping out kids lower in my grade,” Cisneros said.

Cisneros helps the younger students with vocabulary and said the biggest problem they usually have is reading the words.

“It’s like when I started learning English and I didn’t know some of the words,” she said. “I’m helping them out.”

As North greeted students coming to the meeting this month, she expressed her pleasure with the impact the club is having on the student body and herself.

She said the club has had an impact on her with student interactions and she hopes to keep it going as long as possible.

When the club met this month, the students played a game of hot potato with a piñata. Whoever was left with the piñata at the end got to keep it.

Students nervously pass the piñata during the game.

Each of the students received a passport books and get stamps every time they stay after school for the club.