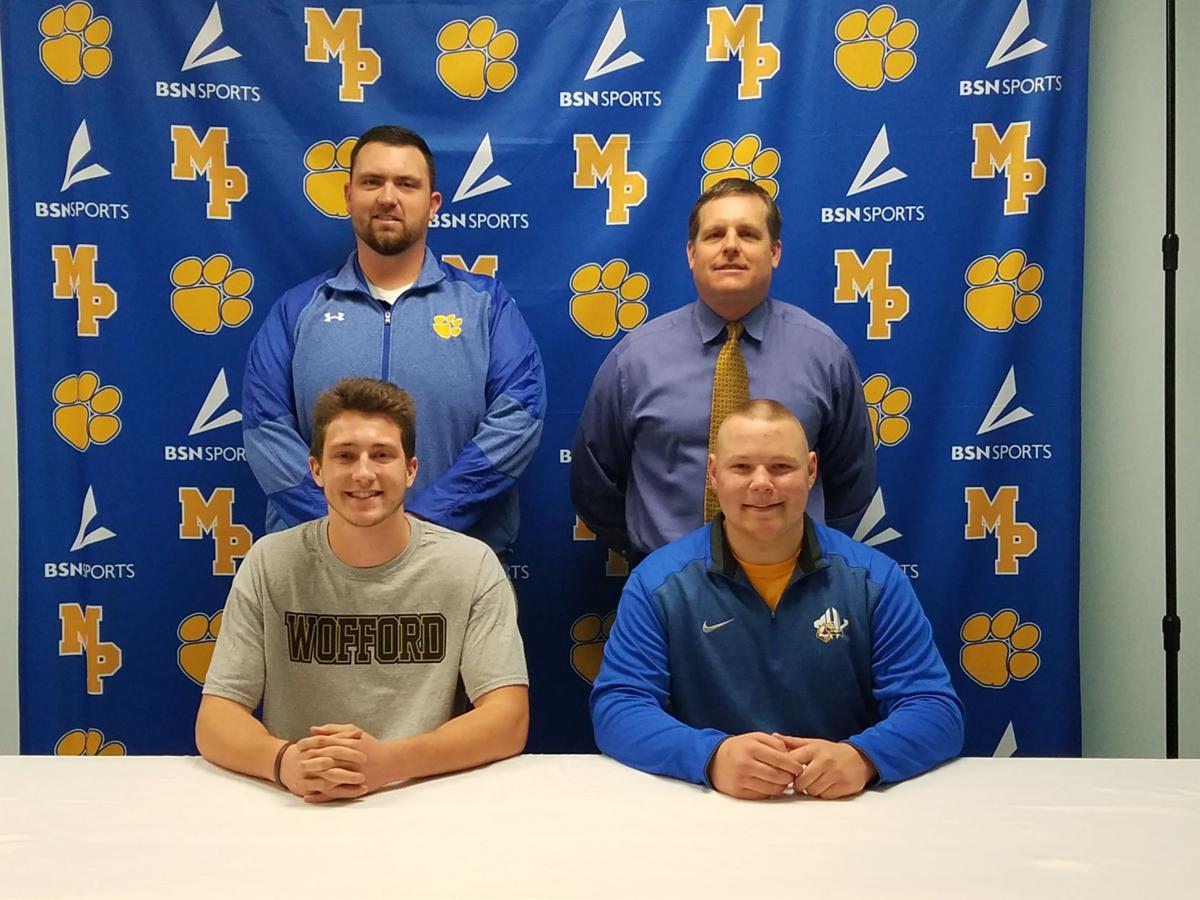 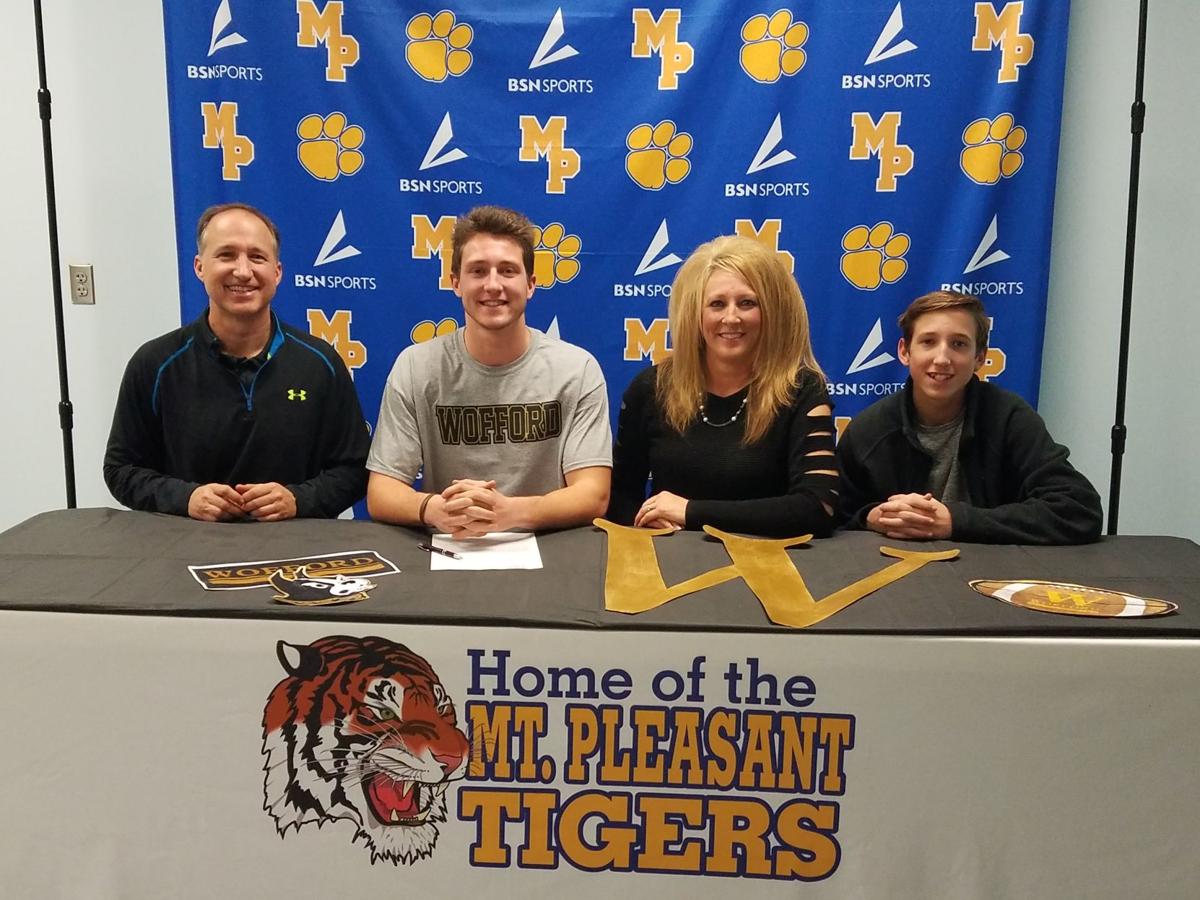 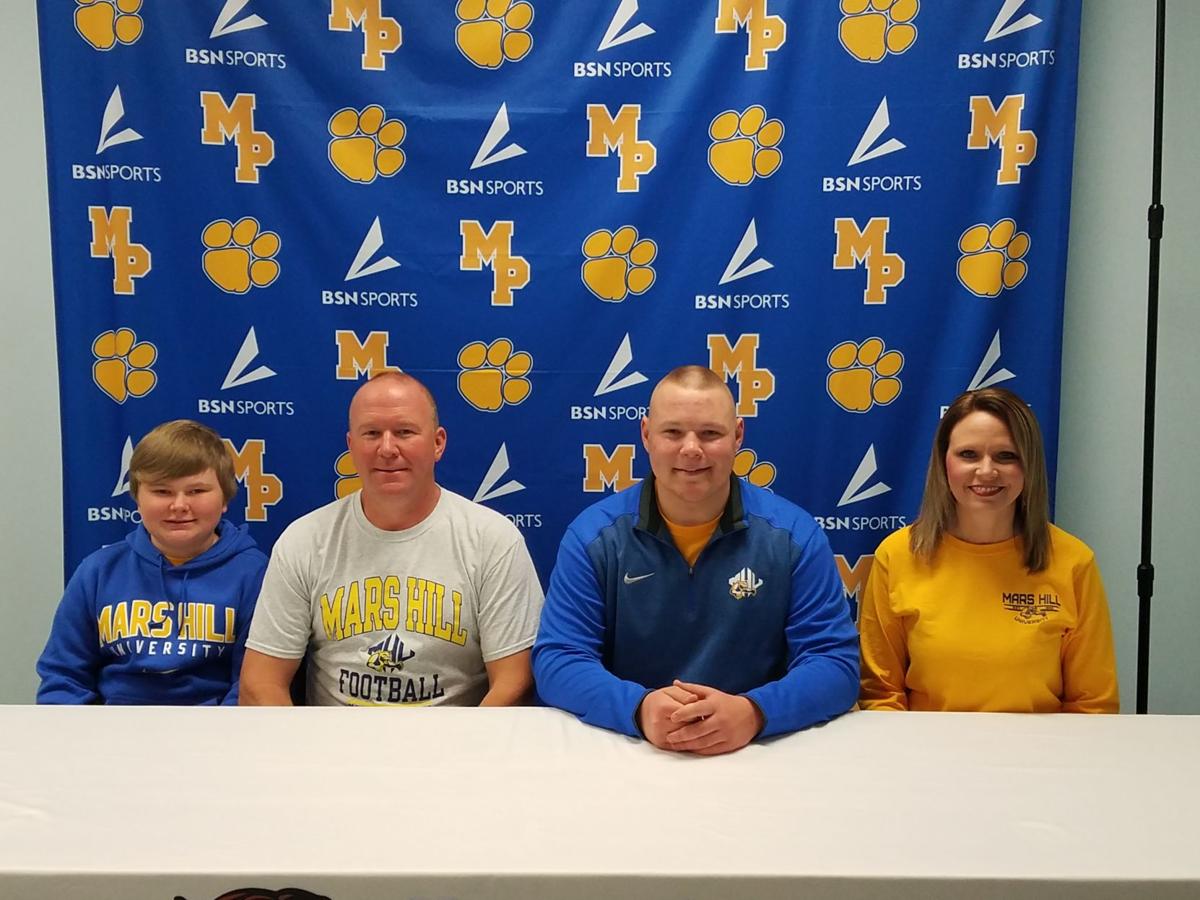 Mount Pleasant football player Gage Redmond is pictured with family (from left), which includes his brother, Grey; his father, Chris; and his mother, Nicky.

MOUNT PLEASANT – Landon Parker and Gage Redmond left their marks on the Mount Pleasant football program, and Tigers coach Mike Johns has little doubt that they eventually will do the same on the college teams the formally joined on Wednesday morning.

During a quiet, 8:40 a.m. ceremony in Mount Pleasant’s media center, Parker signed a National Letter of Intent with Wofford College in Spartanburg, South Carolina, and Redmond inked his NLI to go to northwestern North Carolina and play for Mars Hill.

Parker was one of the most versatile performers in the area his senior season as a wide receiver and a punter. Redmond was a merciless defensive lineman who made 118 tackles in his final campaign. Both were first-team selections on the Independent Tribune Football Dream Team after helping the Tigers to the Class 2AA state quarterfinals.

“They were two huge impact players that had phenomenal careers and really had great years this year as seniors,” Johns said. “They’re both leaving (Mount Pleasant) in a great place. Landon’s second all-time in receiving yards, I think. And as far as defensive line, Gage is in the top echelon of all the guys I’ve ever coached.

“Mars Hill really likes (Redmond’s) film, and they expect him to be a big threat there. Wofford, (wide receivers coach Freddie) Brown and the new staff with (head) coach (Josh) Conklin, they’re very excited about getting such a strong athlete.”

The 6-foot-2, 265-pound Redmond will be at the defensive tackle spot when he finally suits up for Mars Hill. Redmond had overtures from a number of schools, including Wingate and Catawba. Wingate was a little tougher for Redmond to walk away from since his uncle, Central Cabarrus graduate Bryant Redmond, went to the Union County college.

Ultimately, Redmond said, his decision came down to one thing.

“The coaching staff was the biggest impact,” Redmond said. “Everything they said was the right stuff at the right time.”

And so while he’ll get to wear the familiar blue and gold in college, Redmond goes from a Tiger to a Lion. He was thrilled on Wednesday, surrounded by his parents, Chris and Nicky; his brother, Grey; and his paternal grandparents, Don and Norma Redmond.

“It’s a relief, because it’s kind of stressful thinking about where you want to go to school and how you want to further your career,” Redmond said. “But it feels great, because Mars Hill was the best fit for me.”

The 6-3, 190-pound Parker was humbled by his signing, where his parents (Daren and Stephanie) and brother (Bryce) joined him. Parker missed the bulk of his junior season with a fractured spine and was unsure of his college football fate entering his senior campaign.

But the way he played in the final 2017 season made him a must-get recruit. He was virtually unstoppable catching more than 50 passes for 1,209 yards and 17 touchdowns.

Considering his average of roughly 41 yards per punt, some schools wanted him in that role. Wofford, though, only wants him as a receiver and, possibly, a return man. And that’s fine with him.

“I love the coaches,” he continued. “It felt like home from the moment I went there. I’m very excited to go there and show them what I’ve got. And they know I’ve got it.”

And after the mental and physical trauma he endured while sitting out with a fractured spine, Parker plans on making his time in Spartanburg count.

“I’m feeling grateful that God gave me another chance to go out here and play the sport,” he said. “It’s amazing, just having the experience to sign. I’m very excited to go to Wofford and be a part of the family.”

Might As Well Jump: Landon Parker carries on the family tradition of excelling at high jump

Mount Pleasant football player Gage Redmond is pictured with family (from left), which includes his brother, Grey; his father, Chris; and his mother, Nicky.