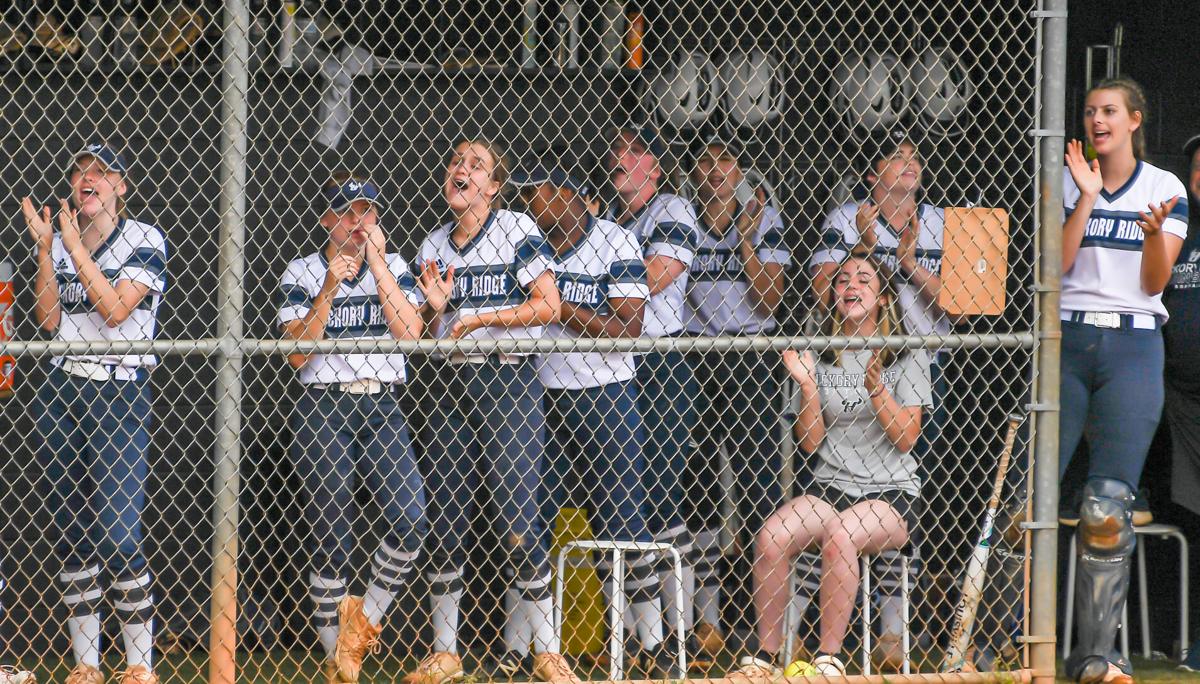 Hickory Ridge players get excited during the win over South Mecklenburg Monday. 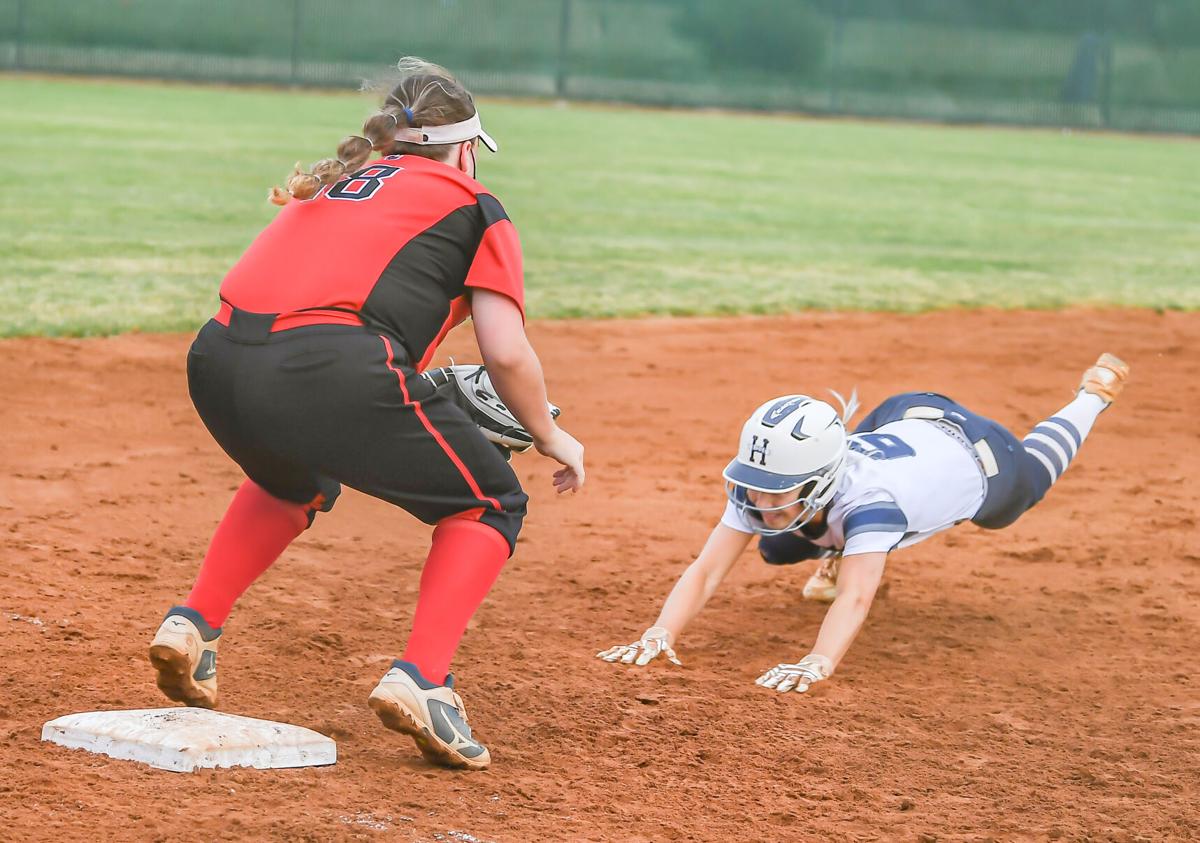 Jadyn Jonasse (6) dives into third base.

HARRISBURG – The top-seeded Hickory Ridge Ragin’ Bulls continued where they left off after winning a conference championship last week, posting a 14-4 victory over 16th-seeded South Mecklenburg in the first round of the Class 4A state softball playoffs Monday on their home field.

The Ragin’ Bulls (13-2), who sealed the Southwestern 4A Conference title last week, used a phenomenal display of hitting to advance to the second round of the playoffs, where they will face the winner of Tuesday’s game between Indian Trail Porter Ridge and Lake Norman.

Against South Mecklenburg’s Sabres, the Ragin’ Bulls rapped out 21 hits, with Kylie LaRousa, Gracie Parker, Nicole Otto and Alycea Gilliam getting three apiece. LaRousa, an Appalachian State signee, also had a four RBIs and the game’s only home run, while Gilliam also knocked in four runs.

While their hitting was the story of the game, the Bulls had a few rough moments fielding the ball, leading to six errors.

“By no means did we play perfect softball today,” Hickory Ridge coach Justin Davies said. “There were a handful of miscues in the field, and there was also some bad base running. We will clean that stuff up and get ready to go.”

Parker got things going for the Bulls with a shot over the third baseman’s head. She later reached home after LaRousa was able to hit a deep shot into center field on an 0-2 pitch for the first of her RBIs. LaRousa hit her home run, a solo shot, in the third inning to give Hickory Ridge a 4-2 lead. The Ragin’ Bulls added 10 more runs over the final three stanzas to get the mery-rule win in six innings.

“Their pitcher really kept throwing it inside on me, and I kept fouling it off until she put it where I wanted it,” LaRousa said. “Then I was able to drive it over the fence.”

“I told Gracie just to go out there like it was warmups with Kylie,” Davies said. “I told her to keep it where the batters were trying to catch up to it, and I think she did a good job.”

Overall, Davies was happy with his team’s performance and thought it executed the plays needed to advance to the next round.

“We made plays happen, we put the ball in play and overall, we hit very well,” Davies said. “They have an incredible pitcher (Taylor Barlow), and we knew that coming in today, so I just told my team to focus on putting the ball in play, and they did that.”

Hickory Ridge players get excited during the win over South Mecklenburg Monday. 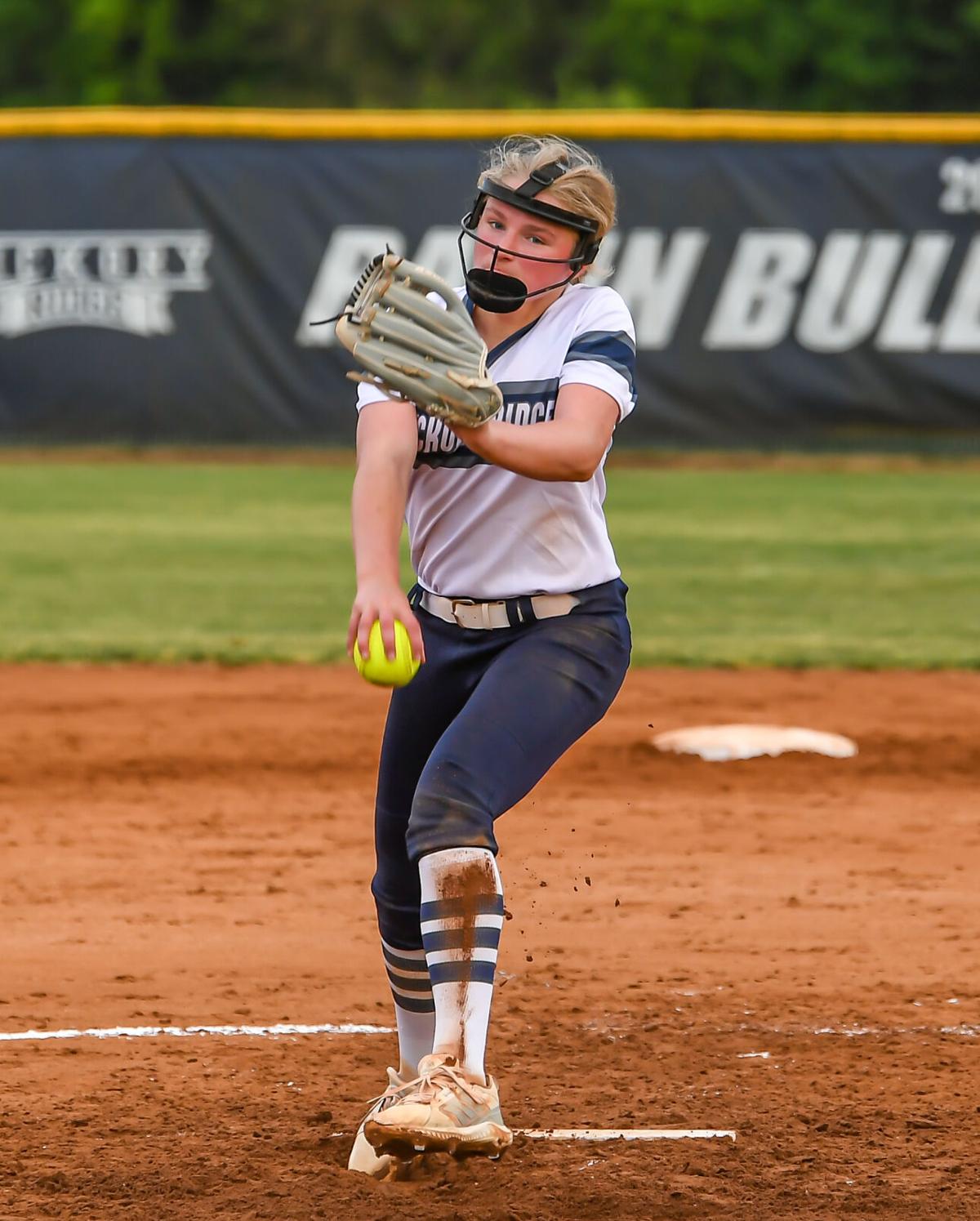 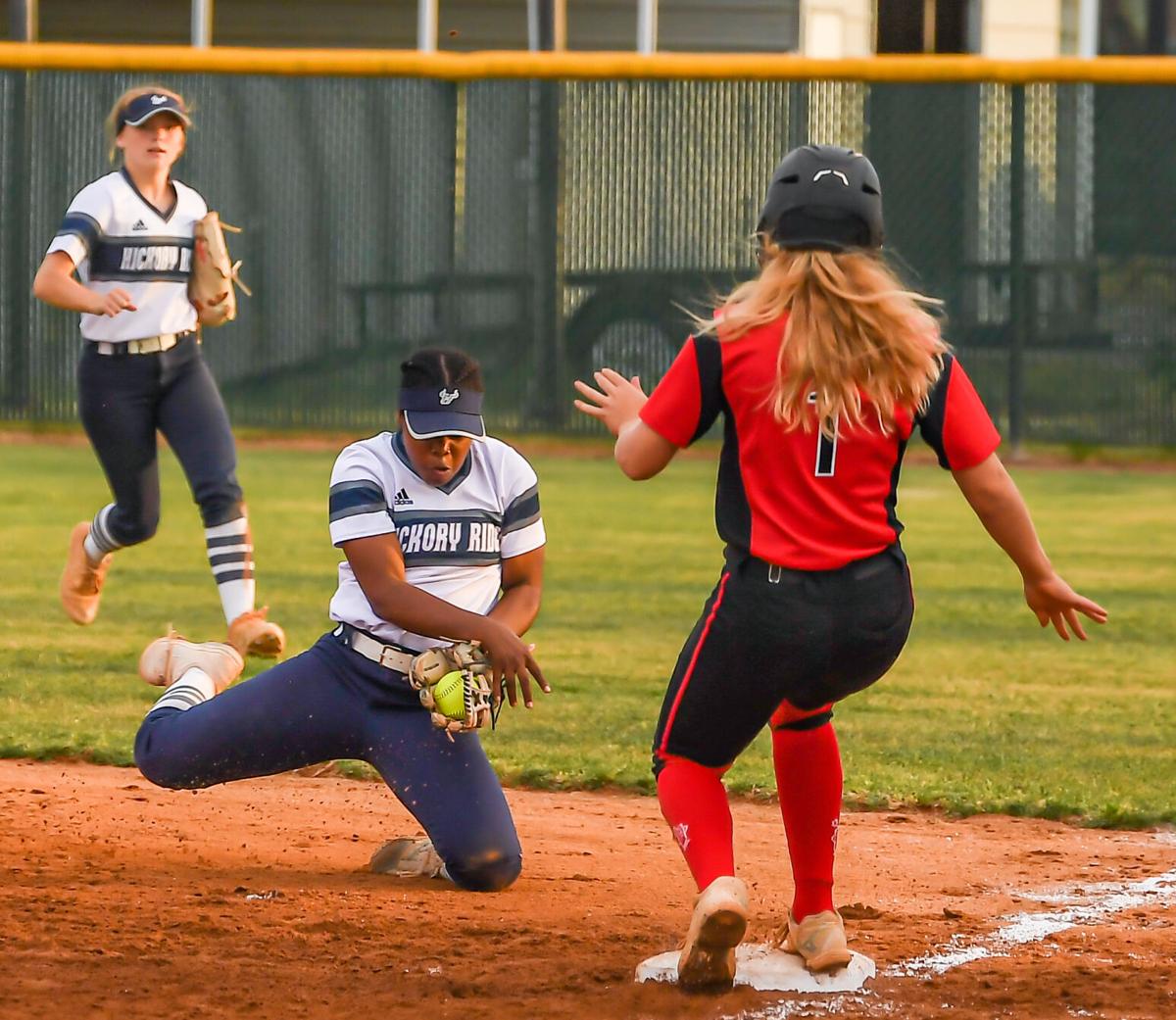 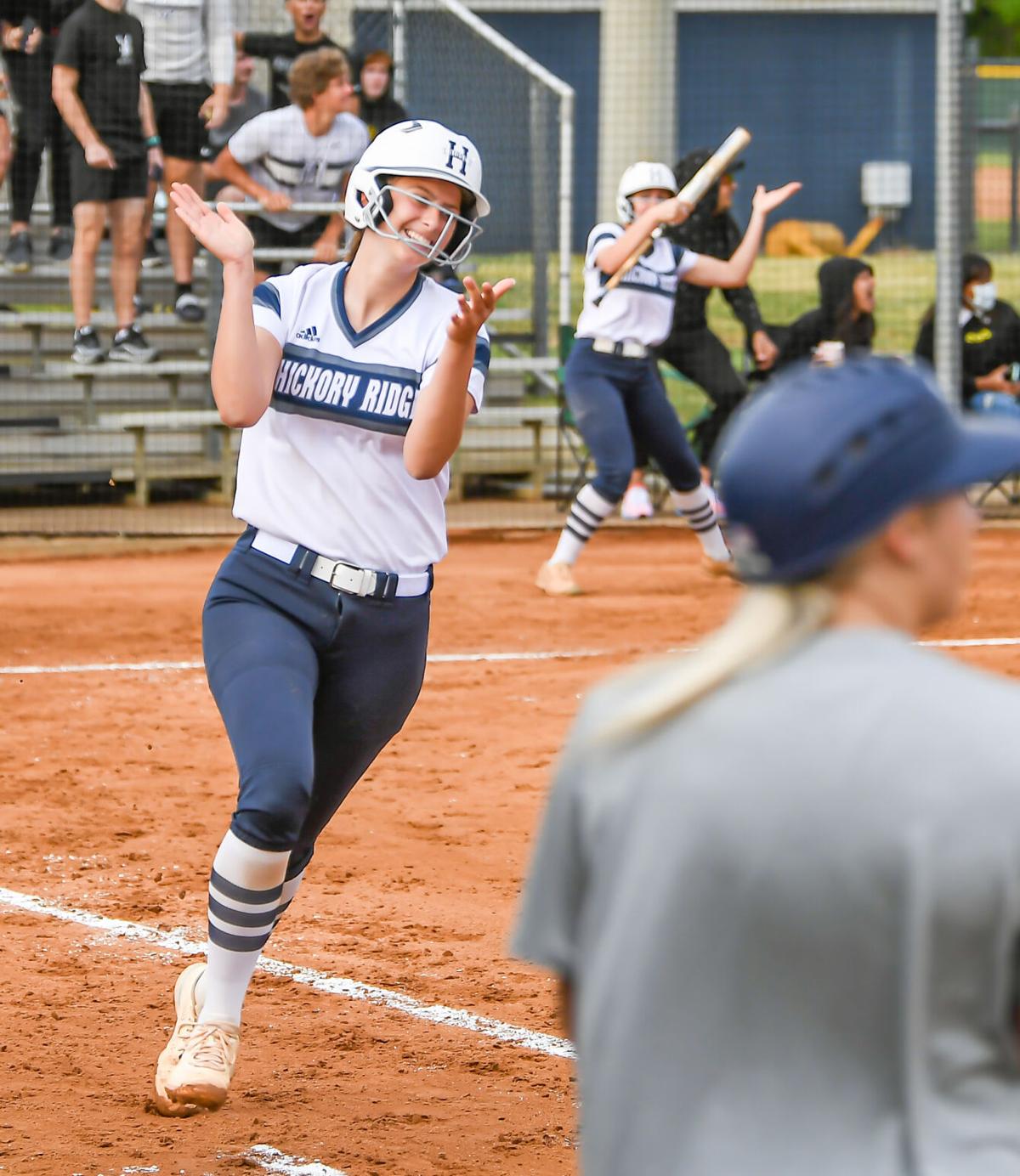 Jadyn Jonasse (6) dives into third base. 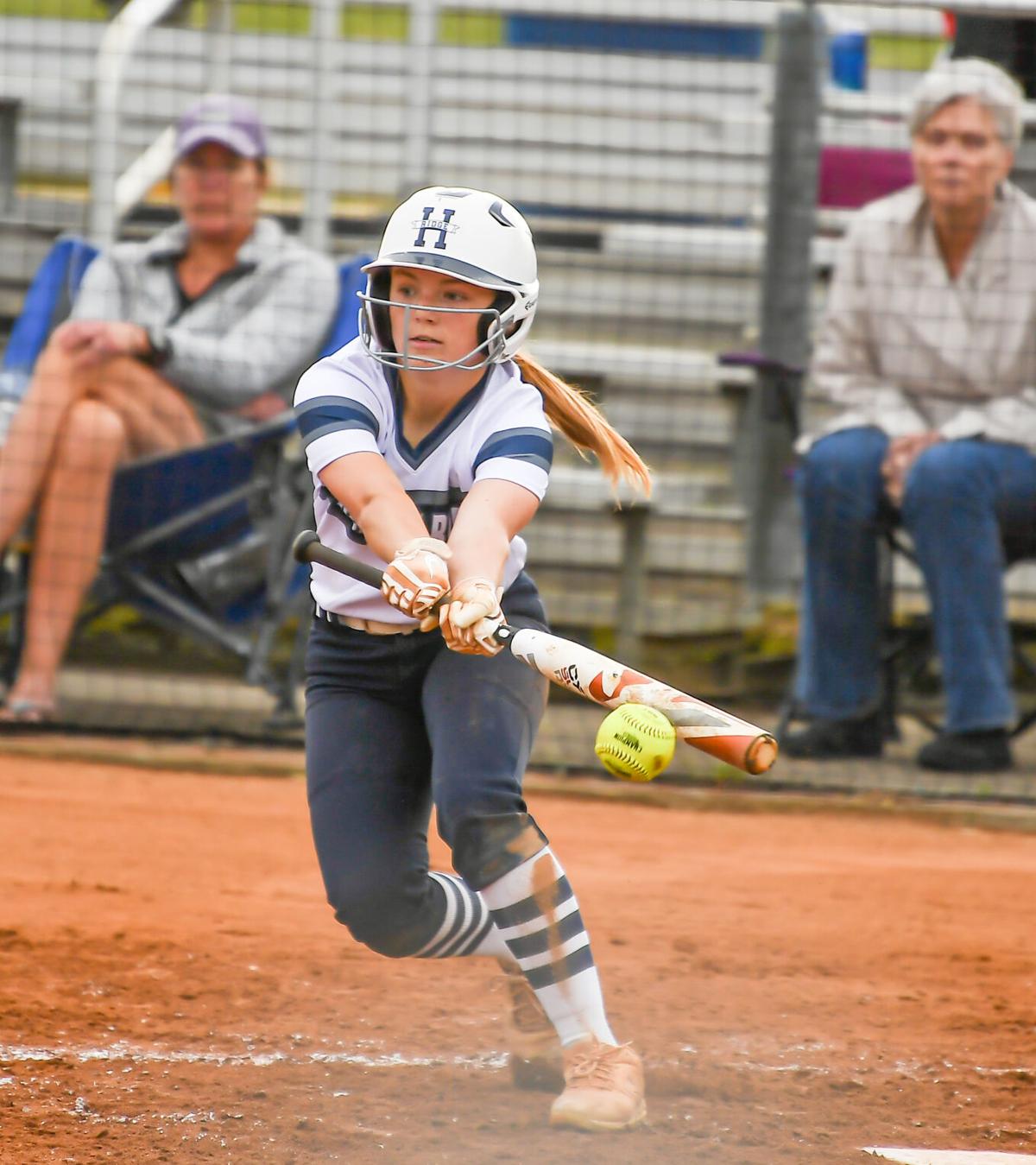 Nicole Otto (4) lays down the bunt.