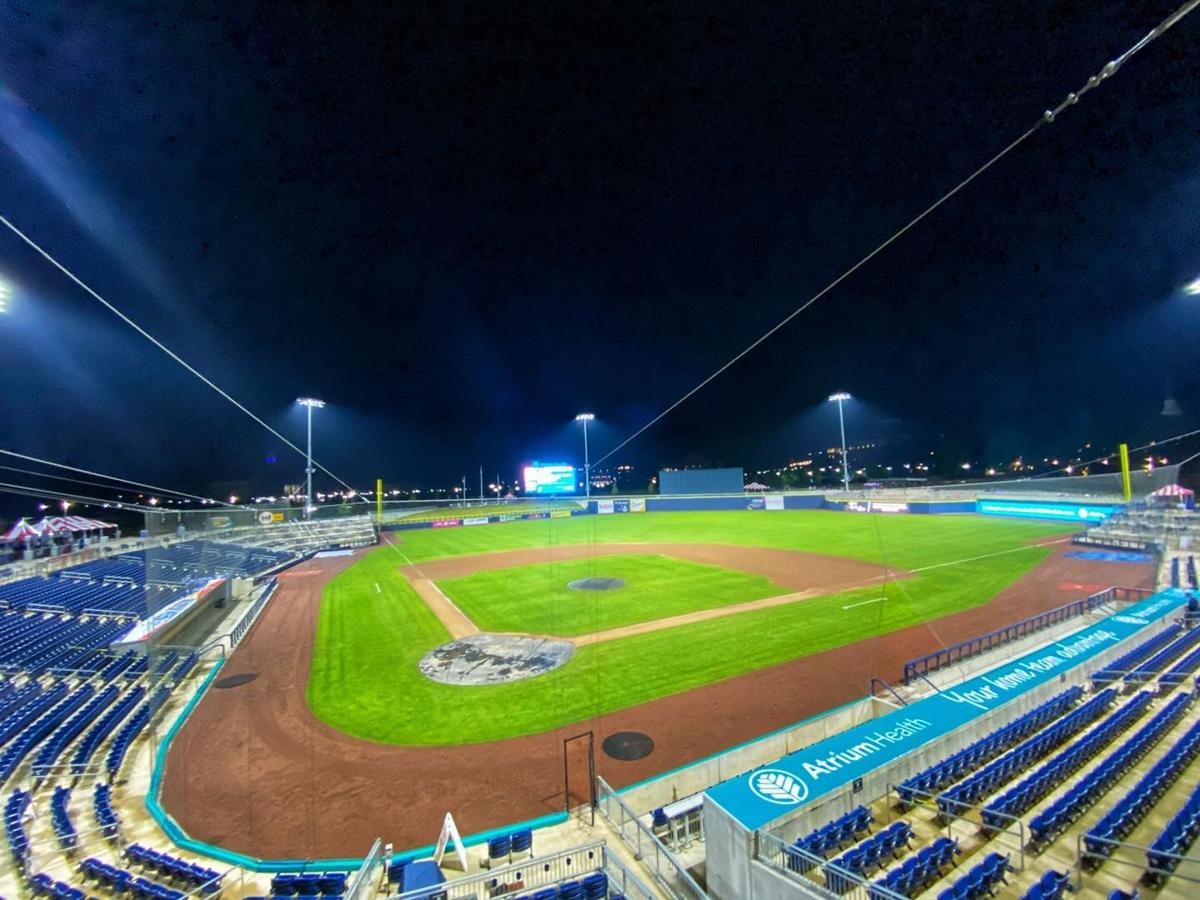 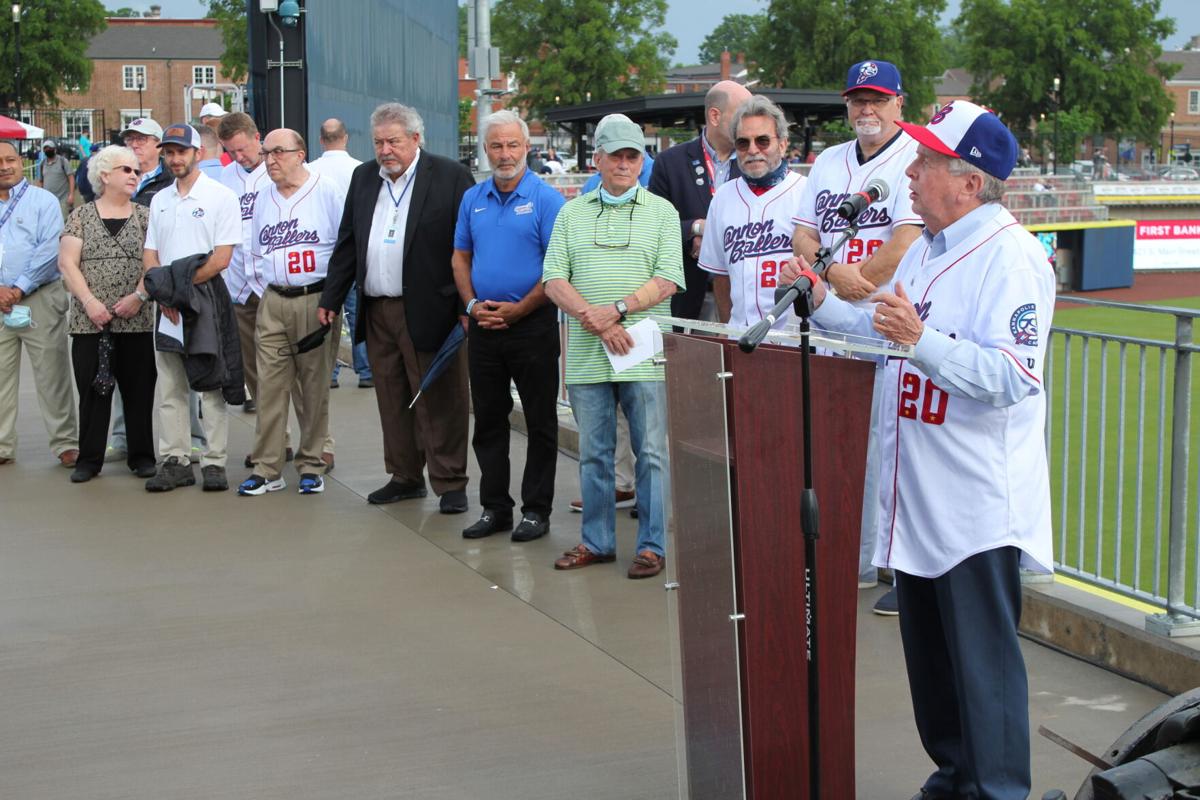 Kannapolis Mayor Darrell Hinnant gives his remarks during Tuesday's opening ceremony. “I’m thrilled to death to be here tonight," he said. "It is everything that we planned it to be and more."

KANNAPOLIS — It took 614 days and a rainout scare, but after a lost season and a new ballpark sitting all but vacant for nearly a year, the Cannon Ballers finally celebrated their inaugural season opener at Atrium Health Ballpark on Tuesday.

While they would have liked to celebrate with a win, the team fell to the Down East Wood Ducks 8-4. That did not put a damper on the excitement throughout the stadium, although some of it might have come from the anxiety that thunderstorms bring to baseball.

Rain fell on the field up to less than an hour before game time, and there were fears that the first game at Atrium Health Ballpark would be pushed back another day. But shortly after 6 p.m., the skies started to clear. Baseball was going to be played, and owner Andy Sandler was finally able to breathe a sigh of relief.

“It feels really good,” he said. “And the weather today almost was a necessary part of getting here. It’s been a long, hard journey, but what it’s really done is the city government folks, the Atrium Health folks, my team, my folks, we really had to work together so hard through all of this that to actually get to the end of it is just spectacular. So, could not be feeling better.”

Trevor Wilt is the play-by-play man for the Cannon Ballers and a native of Cabarrus County. The rain definitely scared him a bit as well.

He continued: “But what are the odds, right? But of course it happened, but (we’re) really excited to be out here.”

Cannon Baller fans didn’t just get to see baseball Tuesday, they also got a preview of what is to come this season as Andrew Dalquist — the White Sox’s No. 8 prospect and third-round pick in the 2019 draft — took the bump to start the game for Kannapolis. He is one of three top-10 pitching prospects in the White Sox organization on the roster, which also includes Jared Kelley and Matthew Thompson — two Texas fireballers and second-round picks from the 2019 and 2020 drafts.

The Cannon Ballers’ roster has 10 of the White Sox’s Top 30 prospects, according to MLB Pipeline, giving Kannapolis one of the most talent-laden rosters in all of the minor leagues. Chase Krogman, the team’s No. 30 prospect, even homered Tuesday, showing off some of the position player talent on the roster as well. Sandler knows just how lucky the team got this year with the roster sent their way.

Kelly was scheduled to start Wednesday and bring his upper-90s fastball to the mound to face the Wood Ducks.

Tuesday’s game, though, was about more than baseball. It was about a kind of return to normalcy for the city. Kannapolis missed out on what was supposed to be its inaugural season at Atrium Health Ballpark in 2020 due to the COVID-19 pandemic. Baseball games across the nation were played either without fans or not at all.

Seeing fans in the stands, even if socially distanced and masked, was a big moment for Congressman Richard Hudson, who was in attendance for Tuesday’s game.

“We’ve all had a tough year, and people are ready to get back to whatever normal is, and tonight feels normal,” he said. “We’re in a ballpark enjoying hot dogs and Sun Drops and Cheerwine with our friends and neighbors; it’s just a great day for the community.”

The Cannon Ballers organization tried not to get too down about losing last year’s season because they knew bigger things were happening. People were losing family members and jobs and were afraid they would lose their homes. Sandler tried to never lose that perspective throughout the long wait for the start of the next baseball season.

“Last year, we lost a baseball season, but a lot of families lost more than that, right? So we tried very hard not to feel sorry for ourselves,” he said. “It was just something we all had to get through. And as a country and as a community, we’re on the other end of that, and to get to celebrate it with a ballgame is just a wonderful thing.”

While the COVID-19 pandemic is still active in the area, with a 6.45% infection rate in Cabarrus, things are looking up. More than 73,000 people have received at least their first dose of vaccine, and more than 53,000 have been fully vaccinated in the county.

Things are on the verge of getting back to normal. Gov. Roy Cooper has even alluded to removing the mask mandate as soon as June 1. And as things return to normal, the city of Kannapolis will start to see the fruits of its labor that began with the new ballpark several years ago.

The decision to put the ballpark downtown was made to give Kannapolis an anchor to bring people and businesses to an area that officials hoped to revitalize. With what Mayor Darrell Hinnant said he saw Tuesday, the city’s plan is coming together.

“I’m thrilled to death to be here tonight. It is everything that we planned it to be and more,” he said. “Look around. If it hadn’t been for this ballpark, we wouldn’t have restaurants. We wouldn’t have shops and everything else. This was exactly what our consultant told us this was going to do for us. It was going to be the anchor that was going to bring a couple hundred thousand people here each year. You add that to what the Gem Theatre — 130,000 — you look at what they’re planning over here for the performing arts center — another 100,000 — we’re going to have 400,000 people coming downtown. There are going to be plenty of times they’re going to be shopping, eating and everything else, so that’s exactly what we planned.”

Bringing everything together has been a group effort between the Cannon Ballers coming downtown, the Gem Theatre undergoing renovations, the Swanee Theatre being planned as an entertainment venue in the fall and several businesses opening around the ballpark.

Tuesday showed just what the plan was, and it also gave the residents of Kannapolis the game of baseball. It was everything Wilt hoped for and more.

“It’s a dream come true,” he said. “It’s like, (a) man just stopped me and said, ‘Trevor, Happy New Year, Merry Christmas.’ That’s what it feels like. It literally feels like Christmas, New Year all over again — it’s just opening day. So whatever way you want to put it, it’s just so cool to see people that are coming out to the ballpark. We’ve been that public park for people; we’ve been this hub for entertainment for the city of Kannapolis and for the community; but now they get to watch baseball and they don’t get to see just an open field, so it’s going to be really nice.”

“You, Class of 2021, have proven time and time again just how amazing and special you are,” CCS Interim Superintendent Brian Schultz said. “You are strong. You are determined. You are flexible. You are tenacious. You are optimistic. You are admired. And most of all, you are loved.”

City Councilman Ryan Dayvault has withdrawn from the 2021 mayoral race in Kannapolis, he announced Wednesday in a Facebook post.

Kannapolis Mayor Darrell Hinnant gives his remarks during Tuesday's opening ceremony. “I’m thrilled to death to be here tonight," he said. "It is everything that we planned it to be and more."