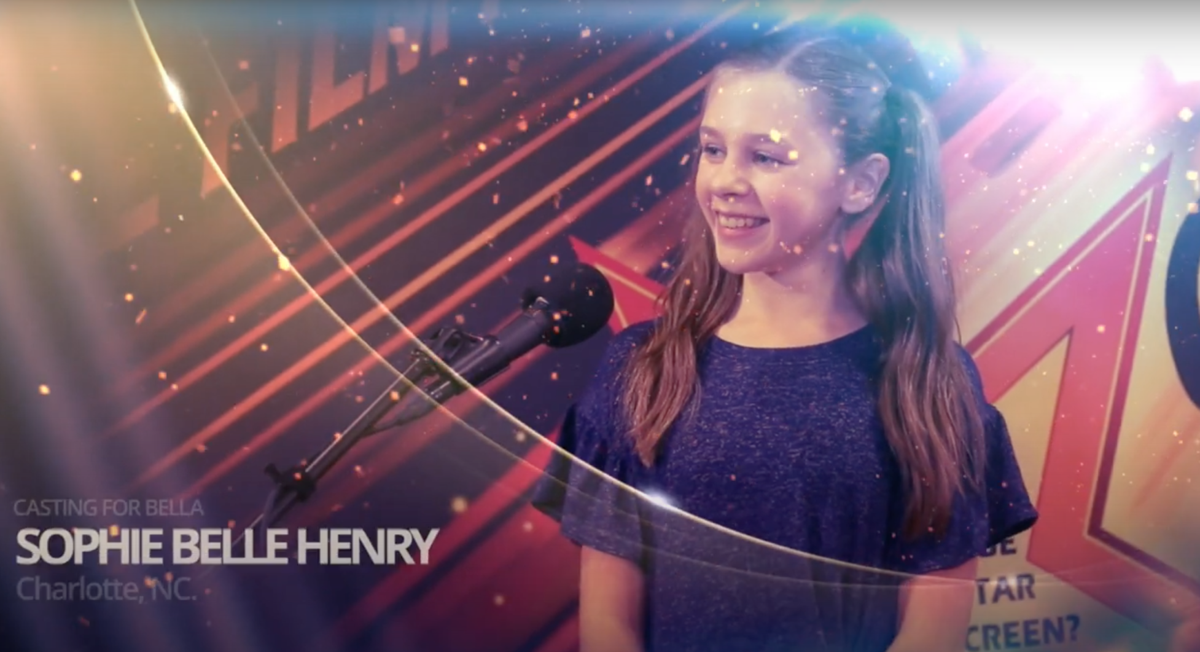 Sophie Belle Henry will play the role of Bella in “A Carolina Christmas.”

Christmas movies are a huge part of the holidays for a lot of families. Some favor the classics like “It’s a Wonderful Life” or “Holiday Inn,” while others enjoy more of the family fun brought by “Home Alone” or “A Christmas Story.”

Many teenagers will sit alongside their families this year, watching their favorites with a cup of hot chocolate and a Christmas cookie. But one Cabarrus County teen won’t just be watching a Christmas movie; she’s going to be in one.

Sophie got the part of Bella after participating in Dalton Pictures’ “The Film Project,” an “American Idol”-style acting competition that auditions some 2,500 contestants and gives several a shot at starring in a local film.

At the time of the show, Sophie was 12 and had some acting experience on stage, but she had never tried out for something as big as this.

“We subscribe to a couple of sites that send out audition opportunities in Charlotte, Atlanta, other places,” Sophie’s mother, Heather, said in a Zoom call Wednesday. “So on one of those sites last summer, we saw an open casting call.

“Part of the way the industry has gone, a lot of things have gone virtual, they call it a self-tape, so this was a rare opportunity.”

Sophie and her mother thought this would be a good chance to get in front of a casting director and see what that was like.

“If nothing else, it will be a great experience to get to be directly in front of a casting director,” Heather said. “It’s not something that happens very often, and it was coming to Charlotte, so it kind of seemed like a no-brainer.”

Sophie didn’t go into this thinking she was absolutely going to get the part. She wanted to learn and wanted the challenge of acting in front of someone who would be actively critiquing her.

That is a nerve-wracking situation, and one that almost didn’t happen.

“I almost didn’t go to the audition,” Sophie said. “I was like, ‘I’ve gone to so many auditions; I’ve never gotten anything.’

The risk paid off as she impressed the casting director and was ultimately given a part in the movie. It wasn’t a small part either. Sophie had 15 to 30 lines in the movie, which will premiere at 6:30 p.m. at Carolina Mall Cinemas today, Nov. 20.

This was only the beginning, though, as the audition took place last summer, filmed in the fall and went through editing over the last year. The experience was so great, the entire family got sucked in. Well, they probably didn’t take too much convincing since they all got to be in the movie. Each family member appears as an extra throughout the film, and Sophie’s father was actually a featured extra toward the end.

“It was all really exciting,” Sophie said. “All through the filming of the movie I was asking, ‘Is this all really happening?’

“Because I’ve never done something like that before, so it was all so exciting.”

The family has already seen the film, as it premiered earlier this month in Myrtle Beach, South Carolina, where the film was shot. They weren’t able to do a true red-carpet experience due to restrictions from COVID-19, but getting to see all of her co-stars again was something Sophie enjoyed.

She spent a lot of time with her fellow actors in the filming of the movie, and she may not have gotten the chance to do so had she not already been enrolled at HOPE Academy in Cabarrus County. The school was operating on a hybrid system even before COVID-19, and Sophie was only going to school three days a week on campus. That made her job of getting down to Myrtle Beach for filming a lot easier. However, she still had to miss a few days of school, and HOPE Academy worked with her to make it work.

“I had to miss a lot of school,” Sophie said. “But all of my teachers were really flexible with me. If I wasn’t able to get an assignment in on time, they gave me a lot of grace with deadlines.”

What was especially difficult, though, was keeping the fact that she was going to be in a movie a secret. Sophie couldn’t tell any of her classmates she had gotten a role in a film, and she couldn’t explain to anyone at school except the administrators why she wasn’t in class on certain days.

The reason for that was “The Film Project” hadn’t aired yet, and for shows that haven’t aired, a lot of discretion and secrecy is required. So Sophie had to keep her big news hidden.

“I really wanted to tell all of my friends,” she said. “I let them know that I was doing something because I had to miss some school and so, obviously, they needed an explanation.

“So I could not wait whenever the episodes started to come out, and whenever my episode came out, I was super excited to finally tell all of my friends, ‘I was in this movie, and I played this part,’ and they were all really excited for me.”

Sophie actually got into acting for the costumes when she was 8 years old and her babysitter started an acting camp. That babysitter is now in college getting her degree in theater education.

Sophie may have never thought a small thing like that would lead to being in a movie, but no one thinks ahead like that when they’re 8. Now that she’s 14, though, the thought of doing more with acting is certainly on her mind, but it’s not something she’s going to stress out over.

“I think I’m really starting to think about it, like, ‘Is this something I want to pursue?’ Because I know my parents are paying a lot of money for all my classes and stuff that I’m doing, and I feel like I’m really growing in those classes, but at some point I’m going to need to consider very seriously, is this what I want to do?”

She has time, but what she also has is a movie coming out today, and whatever she does after this, that’s something she can always hang her hat on.

“I am so excited,” she said. “I cannot wait for people to see this amazing move. I just can’t wait.”

Tickets for “A Carolina Christmas” can be purchased at fandango.com/a-carolina-christmas-2020-223845/movie-overview.

There will be a showing today at 6:30 p.m. at Carolina Mall Cinemas and it will run through Tuesday.

Sophie Belle Henry earned her part in A Carolina Christmas after auditioning on The Film Project last summer. Her audition begins at the 6:40 mark.

Sophie Belle Henry will play the role of Bella in “A Carolina Christmas.”