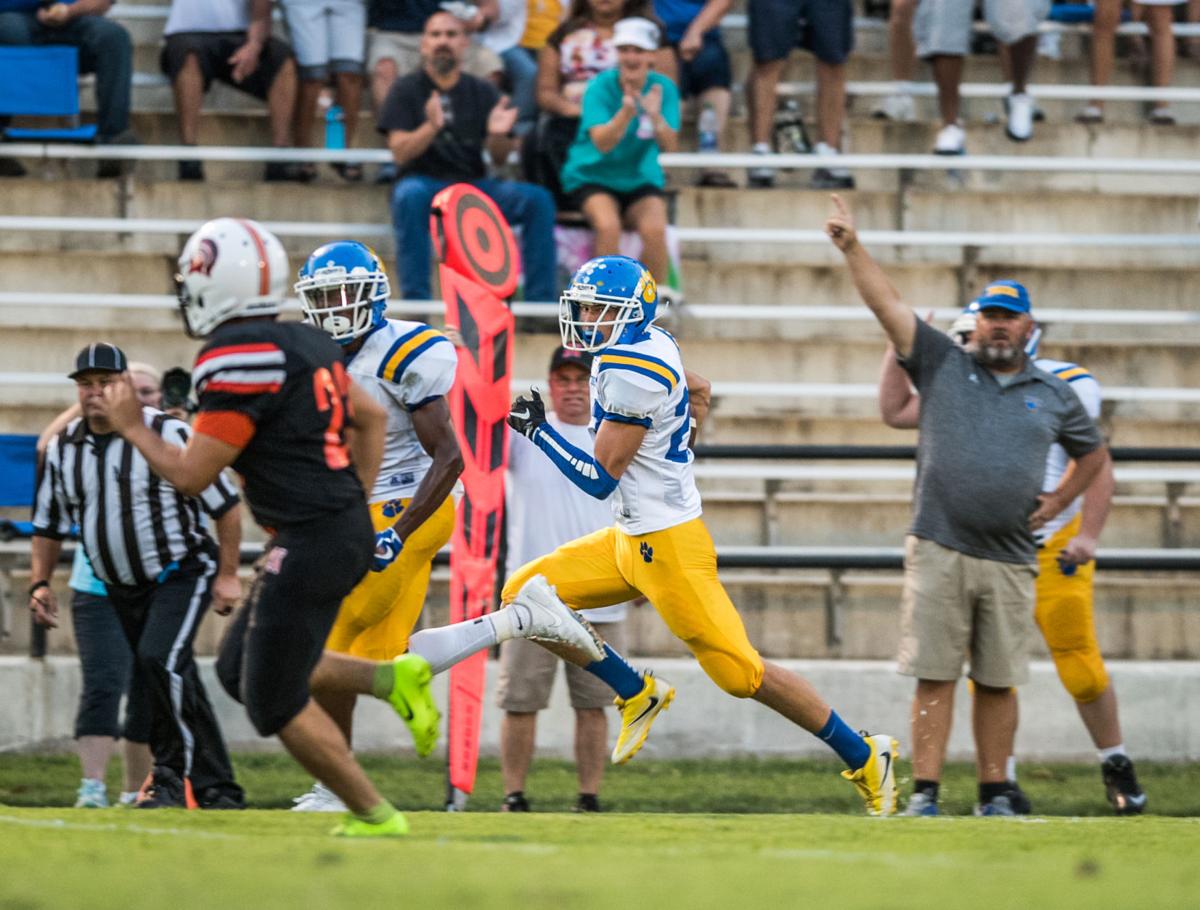 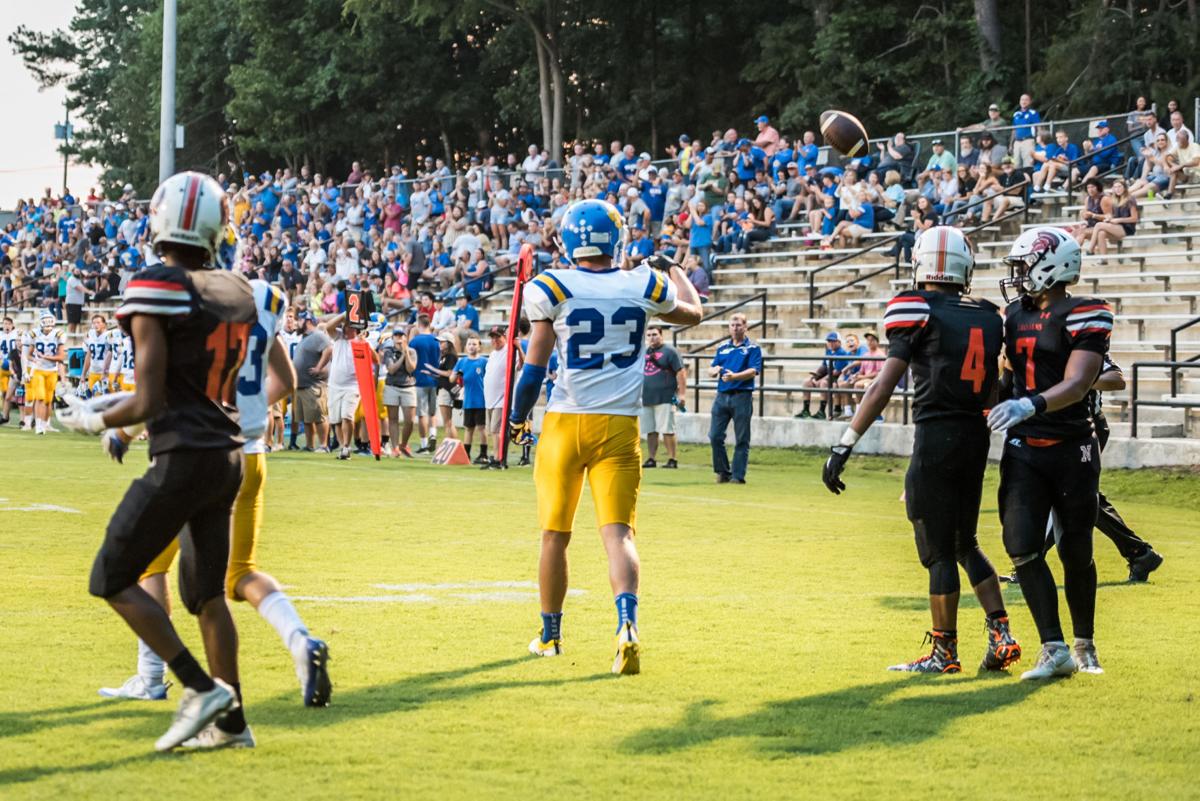 CONCORD – There were moments this time last year when Landon Parker was worried that he’d never get to experience situations like the one he faced late Friday night.

Game on the line. Heart fluttering. Fans screaming. His team needing him to make a football play.

Those four months he’d sat out recovering from a fractured spine – yes, a fractured spine – had made him miss the game even more, and he was desperate to make it back. He had played the hurry-up-and-wait game so he could heal, and then he had to rely on medical professionals to finally give him clearance.

But here he was, in Northwest Cabarrus’ noisy stadium Friday night with his Mount Pleasant teammates, trailing by three points in overtime and, thus, needing to find a way into the end zone to escape the surprising Trojans.

But at this point, after what he’d already been through with such a serious injury, nothing really seemed impossible.

“I had to believe that we were going to get in there somehow,” said Parker, a senior receiver. “I was getting a little worried. I said, ‘I’m going to have to do something in this overtime.’ And I believed I was going to catch the ball and get into that end zone.”

Just one play after Northwest had taken a 24-21 lead on a field goal by Mario Alvarado, Mount Pleasant took its turn in overtime. With Parker lined wide left, Tigers quarterback Chance Daquila whipped a pass to Parker, who executed a perfect move to reach paydirt.

“Chance, he said if he taps his butt, then it’s coming to me, so I was ready for it,” Parker said.

Winning a game in such dramatic style was thrilling enough for Parker. But talking about where he was this time last year – watching as his teammates got to wear that beloved Blue and Gold – made him appreciate the moment even more.

I’ll type it again: Parker had a fractured spine. Basically a broken back. That would be something major for a desk worker to overcome.

But a football player?

Well, it takes something different to want to get back out there and compete in this combat sport after going through an injury that takes such an emotional and physical toll on a truly delicate part of the body.

So for Parker to come back and be as dominant as he’s been for the Tigers so far this season tells you what kind of player -- and person – he is.

Last week, Parker surpassed 100 yards receiving and returned a kickoff 93 yards for a touchdown in a 35-7 victory over Cox Mill. Then Friday came, and he was pure gold against Northwest.

Parker was the main scoring threat for the Tigers, who were limited to 126 yards of offense, a rarity for a Mount Pleasant squad. In addition to his game-winning catch in overtime, he also had an electrifying 56-yard punt return for a touchdown, although it eventually was wiped away because of a penalty for a block in the back.

“He has played phenomenally these last two games,” Mount Pleasant coach Mike Johns said. “He did a great job on the punts (Friday). He was getting heavy pressure on those punts, and he got them all off. And the punt return was beautiful.

We weren’t making first downs like we were last week, so we really needed him.”

And he needed the Tigers.

Parker’s teammates had provided him with so much support while he was out last year, and it made a difference. They knew what he had endured.

Parker was preparing for a junior season in which he looked to impress scouts, hoping to earn a spot on a college roster like his father, Daren, had at the University of South Carolina and his brother, Austin, has with the Blue Devils.

Then, the unimaginable happened.

“I was in weightlifting, and I squatted,” Parker recalled. “It was a lot of pressure, and I was growing a lot, and (my spine) snapped. The pain kept getting worse and worse over the summer workouts, so I finally went in and they told me it was broke off or something.”

It would be a long time before Parker would take the field again, and that fact might have hurt him more than the moment he fractured his spine.

“Oh, it was devastating,” he said. “Seeing my teammates playing instead of me and just watching, it was just devastating because I love this sport and going to get those touchdowns. It’s just fun.”

Finally, after getting the blessings of doctors and his parents, Parker got to rejoin the Tigers in October 2016. He played in just seven games, including the playoffs, but he was effective, ranking second on the team in receiving yards (268) and scoring three touchdowns.

Despite his statistics, he didn’t quite feel like himself last year.

“I was a little nervous at first, because I didn’t know if it was going to break it even more or if I’d have to get surgery on it,” Parker said. “But I’m hanging in fine, and I should be good this year.”

He sure looks good.

He’s tall, he’s lightning-fast. He is athletic, he is strong, he is tough.

Every college program needs a player like that, but because of his shortened 2016 season, few teams got to see Parker, connect with him the way he’d hoped.

“He had a spine fracture, and that’s why he’s a little under the radar,” Johns said. “He didn’t do any 7-on-7’s, he started practicing in late September, and he didn’t get to play until the first or second week of October.

“We brought him in slow. We had our running game going last year, but we knew this year we’d have to use him out wide. And I’m telling you what, he’s going to get a lot of attention from defensive coordinators for the rest of the year.”

That’s why Parker is more driven than ever before. He’s always been a hard worker, but this year, he’s going harder. He realizes he’s already accomplished a great deal simply by getting back on the field, but now he wants to show how special he is and how valuable he can be to a college team.

“I had to believe that I was going to do it this year,” Parker said. “Usually, recruits look at you your junior year, so I’m going to have to have a good four games to send out my film. I’ve got to keep the mentality that I’ve got this and just put it behind me and just go out there and play the sport I love.”

So, no, it wasn’t surprising that once Daquila tapped his backside Friday night and Parker knew the football was coming his way, the Tiger receiver simply wasn’t going to be stopped.

If a broken back and deferred dreams couldn’t stop him, what else had a chance against him?

“I wanted the ball, and I finally got it,” Parker said with a grin. “And we got that touchdown.”

Might As Well Jump: Landon Parker carries on the family tradition of excelling at high jump