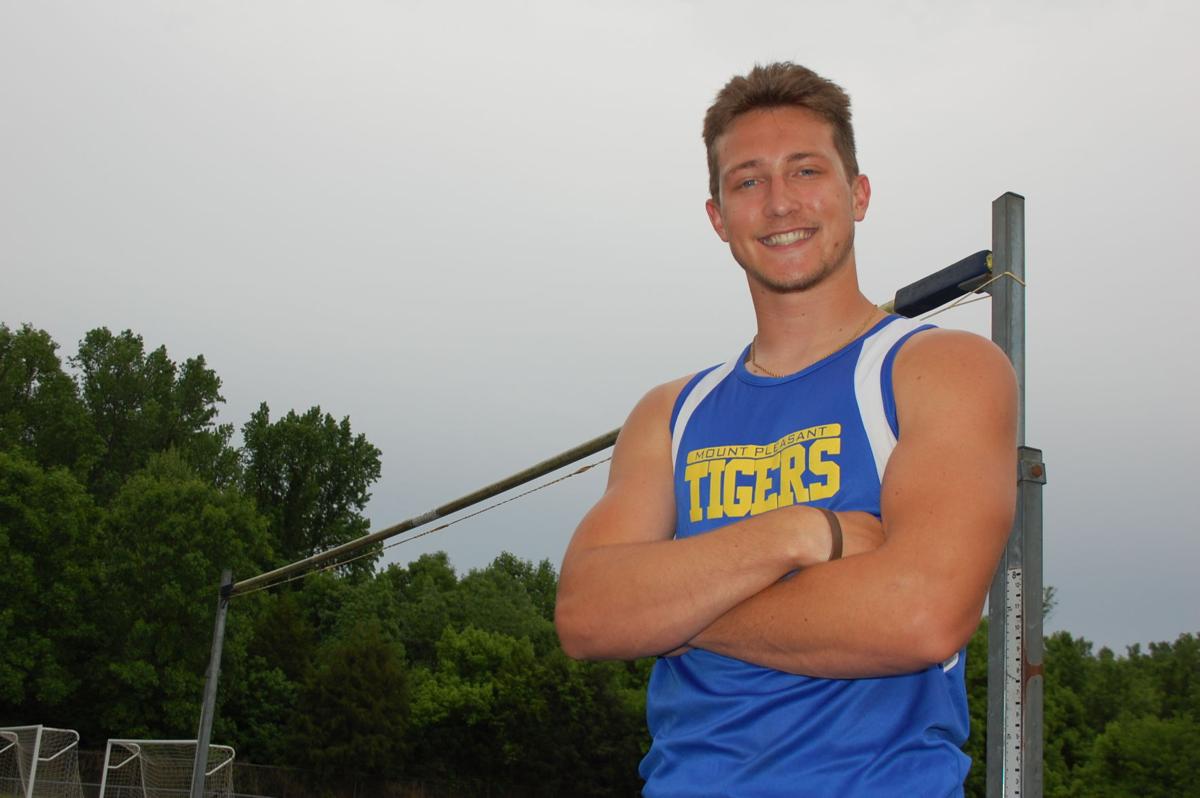 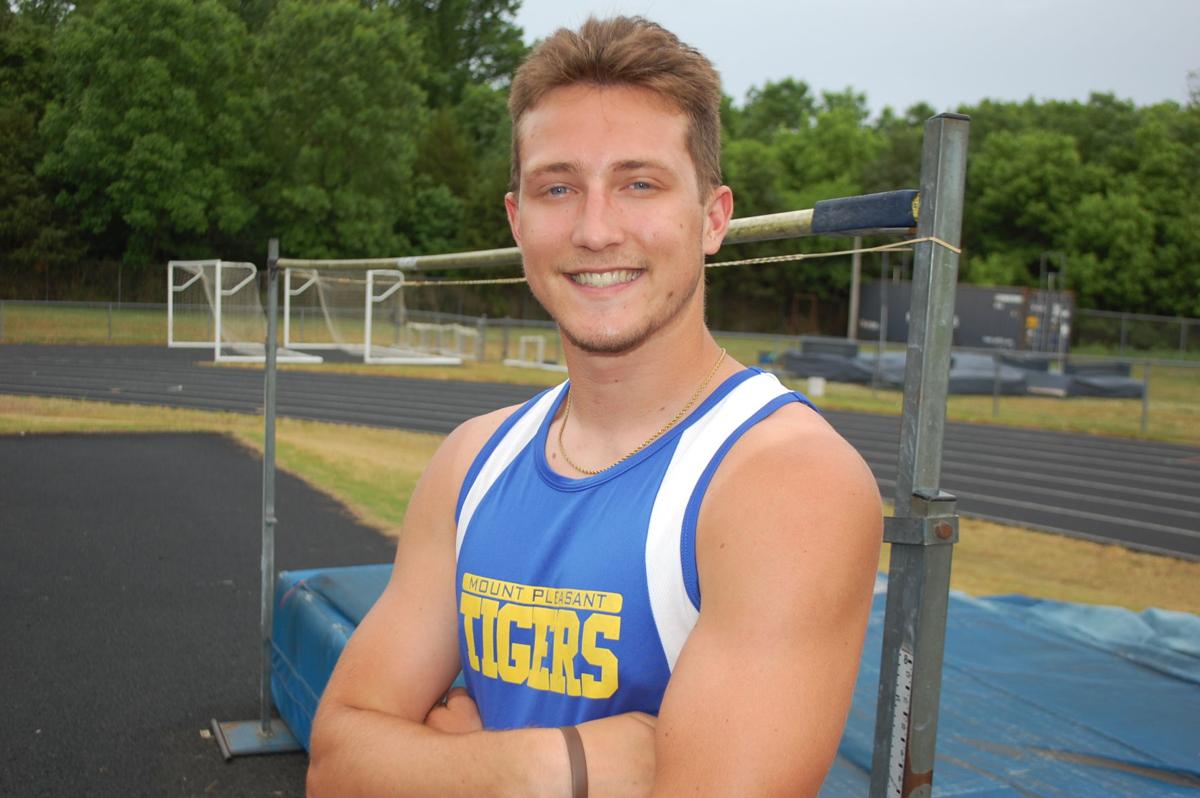 That’s just what that thing seems to do to men in the Parker household.

Decades ago, the high jump pit had summoned the family patriarch, Daren Parker, who was the best at Mount Pleasant High School and all of Cabarrus County before he embarked on a college football and NFL career.

Several years later, it reeled in Landon’s big brother, Austin Parker, who was a smooth leaper and a Mount Pleasant high jump champion himself until he matriculated to Duke University for football in 2015.

Landon Parker, though, spent the first three-plus years of his high school career avoiding the high jump pit, instead spending springtime on the baseball diamond before finally moving to track and field his senior year to stay in shape for a football career at Wofford College.

Even then, however, Landon limited his pit encounters to the long jump, mainly because he’d suffered a serious back injury two summers ago, which he felt wouldn’t be good for an event that required you to arch your back and sometimes land on it, cushioned surface or no.

Then, with the 2018 track and field season nearly gone, Parker couldn’t turn a deaf ear to the long jump pit any longer.

“At the end of practice one day, he was just messing around and wanted to give it a try,” recalled Austin, who spent this season as the Tigers’ jumps coach.

“He went up and actually jumped really high, with some pretty decent form for having never done it before,” Austin continued. “I was like, ‘Man, if you kind of worked at this, at the end of season you could probably qualify for regionals and maybe even make states.’”

Austin’s forecast was dead-on in both cases, except he forgot the part where his baby brother becomes a regional champion.

Last week, competing in just his second meet in the event, Landon Parker won the 2A Midwest Regional high jump title at Surry Central High School and indeed earned a trip to the state championships.

Landon also qualified for the state meet in the long jump, soaring 21-3.5 to take second place in the region.

He heads into Saturday’s state competition at Greensboro’s N.C. A&T State University with a whole new feeling about the high jump, proud to continue another family tradition.

“I really like it,” Landon said. “This is what my family does. The only reason I didn’t do it before was because of my back; I didn’t want to arch all that much, so I did (other events).

“I just tried it one day in practice and said, ‘Well, I might as well do it. I’m pretty good at it.’

“At first, I jumped, and I didn’t arch, but they said I was way over (the bar). After a while, I took a couple more practice jumps, and by the end of the week I could arch pretty well. I’m not really worried about my back anymore. It’s all healed up.”

While the two Parker sons attribute their prowess in the high jump to their father, and rightfully so, since he gained local acclaim doing the event in the 1980s. But Austin and Landon’s mother, Stephanie, also was quite the leaper, as she finished her college volleyball career as the South Carolina Gamecocks’ all-time leader in blocks.

Armed with coaching tips from both his brother and the dynamite athletic background of his mother and father, Landon was excited, and his first live-action encounter with the high jump was a foreshadowing of what was to come.

In his first competition, the stakes were pretty high. It was the Rocky River 2A Conference meet. And if things didn’t go well there, there would be no regionals.

He won by clearing 6 feet.

Inspired, he had an even better week of practice, and he entered the 2A Midwest Regional in Dobson laden with hope. It showed, as he cleared 6-4 and came oh so close to surpassing 6-6. He was over the bar at the higher height, but his lack of his experience showed in his technique. His backside clipped the bar three times, and his day was done.

But nothing was going to diminish the joy he felt collecting another high jump gold medal for the Parker clan.

“I was trying to get first place,” Landon said. “But I just wanted to go out there and try my hardest because I knew that some people were probably a little bit better. I just started a few weeks ago, a week before conference, and I did well while all those other guys had been doing it all year, so it really feels good to win.”

For Austin, the regional meet brought double the pleasure.

First, he got to watch one of his high jump pupils have a gold medal placed around his neck. The fact that the prized pupil was his brother brought more emotions. He was more than happy to share his 6-4 mark.

“You and your little brother, you compete all the time, and Landon and I were no different,” Austin said. “But to see him jump that high and win regionals, it’s just a great feeling.”

The competition will be much fiercer Saturday at the state meet, of course, in both the high jump and long jump. But Landon isn’t worried. While he would like to win, he has other milestones in his sights.

He’d love to start out by surpassing Austin’s 6-4 clearance. Then, he’d like to go for Daren’s family record of 6-6¾.

It’s high jumping ability that was there a long time ago, patiently waiting to reveal itself.

Landon Parker just had to answer the call.

MOUNT PLEASANT – As a longtime coach at Mount Pleasant High, Mike Johns has a hard-and-fast rule against recruiting players from the school’s …

Friday Night Follow-Up: After serious back injury, Parker refuses to let anything deter him or his Tigers

CONCORD -- These are the members of the 2017 Independent Tribune Football Dream Team on offense.

MOUNT PLEASANT – A league-high nine Mount Pleasant players were named to the 2017 All-Rocky River 2A Conference football team this week, and t…