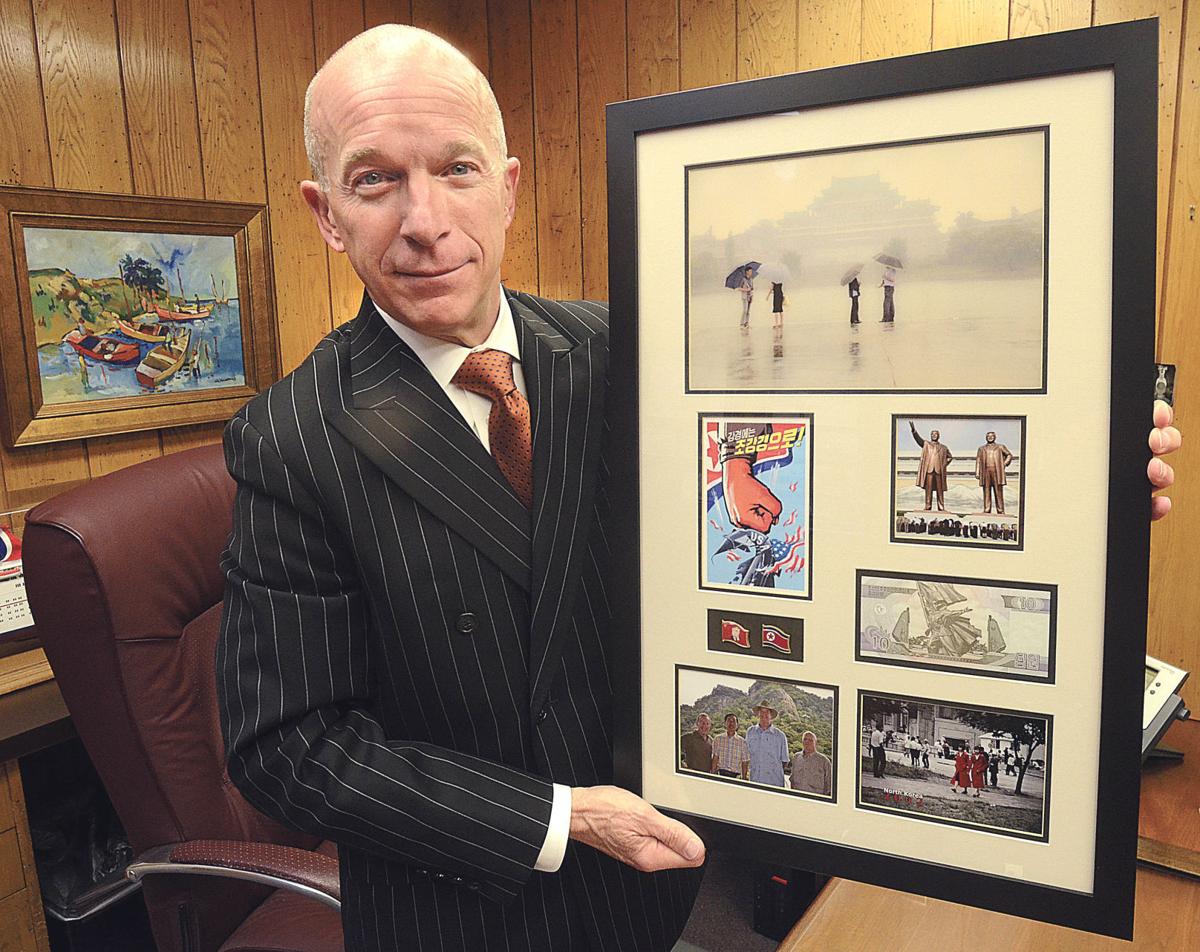 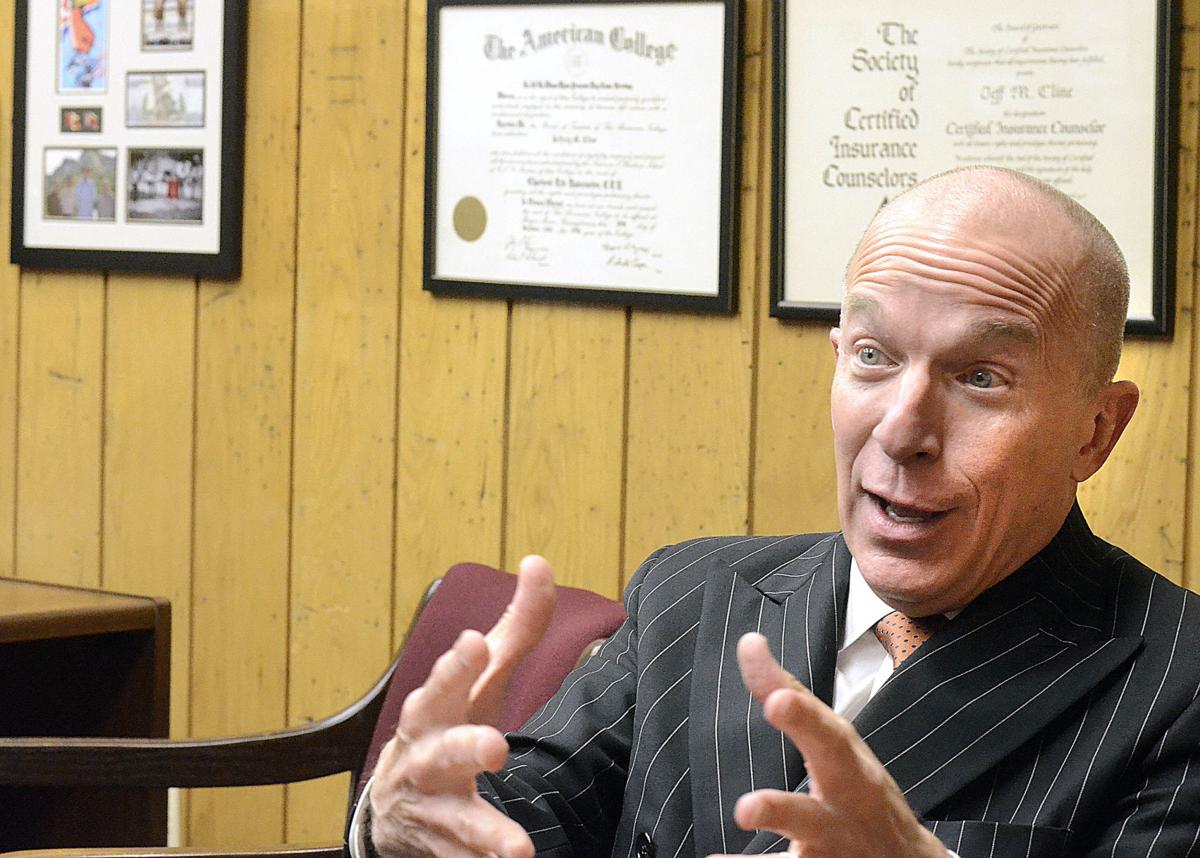 ROBERT C. REED/HICKORY DAILY RECORD: Jeff Cline discusses the lifestyle of the North Korean people based on his 2012 trip to North Korea.

HICKORY — Jeff Cline’s been to 122 countries, but he can’t think of another nation like North Korea. “There is nothing on the planet, nothing that I’ve seen, that compares,” Cline says.

The former Hickory mayor and BB&T insurance salesman visited North Korea for a week in April 2012.

The trip was arranged through a travel agent in Chicago experienced in trips to the country. The group included Cline, two of his friends and nine other Americans. The group flew from Beijing to Pyongyang, the North Korean capital.

“Well, it exceeded expectations in the sense it was even more surreal than I could have imagined,” Cline said. “And for the 12 of us the entire week, probably that word, ‘surreal,’ was expressed more than any other word to describe it.”

All aspects of the trip were tightly controlled. Hotel rooms were bugged and the travelers were always accompanied by their Chinese guide and three North Korean minders.

The group was kept within a roughly 50-mile radius of Pyongyang.

Cline said they encountered a nation in which the people view members of the Kim family, who have ruled the nation since 1948, as deities.

It was also a nation where mistrust of the United States was deeply ingrained.

The group was taken on a tour of the USS Pueblo, a U.S. Navy ship North Korea captured in 1968. The stop at the ship included a propaganda film giving the North Korean perspective on the United States.

“You learn how we are always poised to attack North Korea, that we are trying to get even for our loss in the Korean War,” Cline said. “They see history completely differently than we do.”

The North Korean government put on a propaganda show at various points, serving the travelers large amounts of food to counter the perception of North Korea as a nation with starving citizens.

“It was almost a show of force,” Cline said. “You think we’re starving? Look at this.”

Still, the group was able to get glimpses of some of the realities of life in North Korea.

At one point in the trip, the group was finishing up a picnic lunch. Their Chinese guide quietly told them to look back as they were walking away. Several soldiers left their positions in the woods to go after the scraps the group left behind.

At another point, the group was riding down a 10-lane highway that was deserted except for the road keepers, elderly women who were out in the street dumping gravel into potholes without any sort of protective barrier around them, Cline said. On the way to the airport, Cline saw the road keepers again out working in pouring rain.

Interactions with average people were brief, but the people were genuinely happy and curious when they saw the Americans, Cline said.

Cline said they were able to have more in-depth conversations with the North Korean minders. One of the younger minders, a man about 30 years of age, was talkative and curious about the West.

In particular, the young minder was curious about the reunification of Germany following the Cold War, wanting to use the information as a guide for what a reunification of the Korean peninsula would mean for North Korea, Cline said.

Reflecting on the recent summit between President Donald Trump and Kim Jong Un, Cline is uncertain about what the outcome will be.

"It would seem at this point that Kim Jong Un has scored a great victory, but does this lead to a safer, better world?" Cline said. "I don't know."

In terms of relationships between the two countries, however, the mistrust that many North Koreans feel for the United States might be so great that it will never be overcome, Cline said.

“Well, everything we saw says that they are taught that they do not trust us,” Cline said. “They don’t trust us. I don’t believe that they ever will.”

Kevin Griffin is the City of Hickory reporter at the Hickory Daily Record.

ROBERT C. REED/HICKORY DAILY RECORD: Jeff Cline discusses the lifestyle of the North Korean people based on his 2012 trip to North Korea.