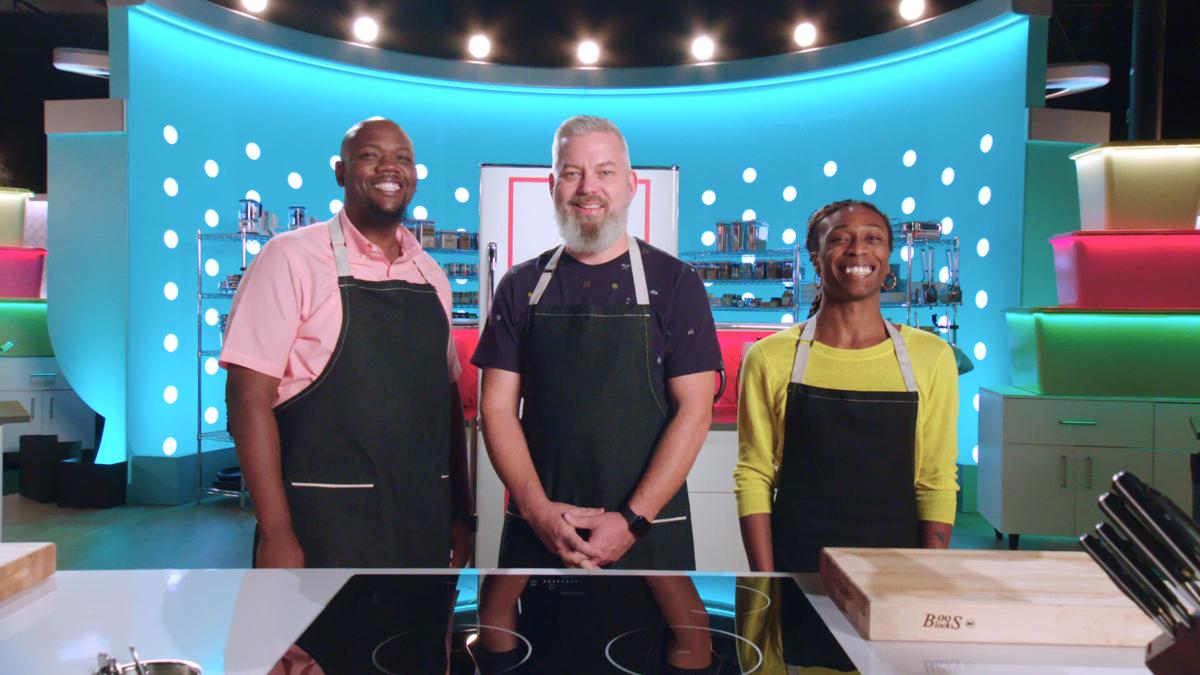 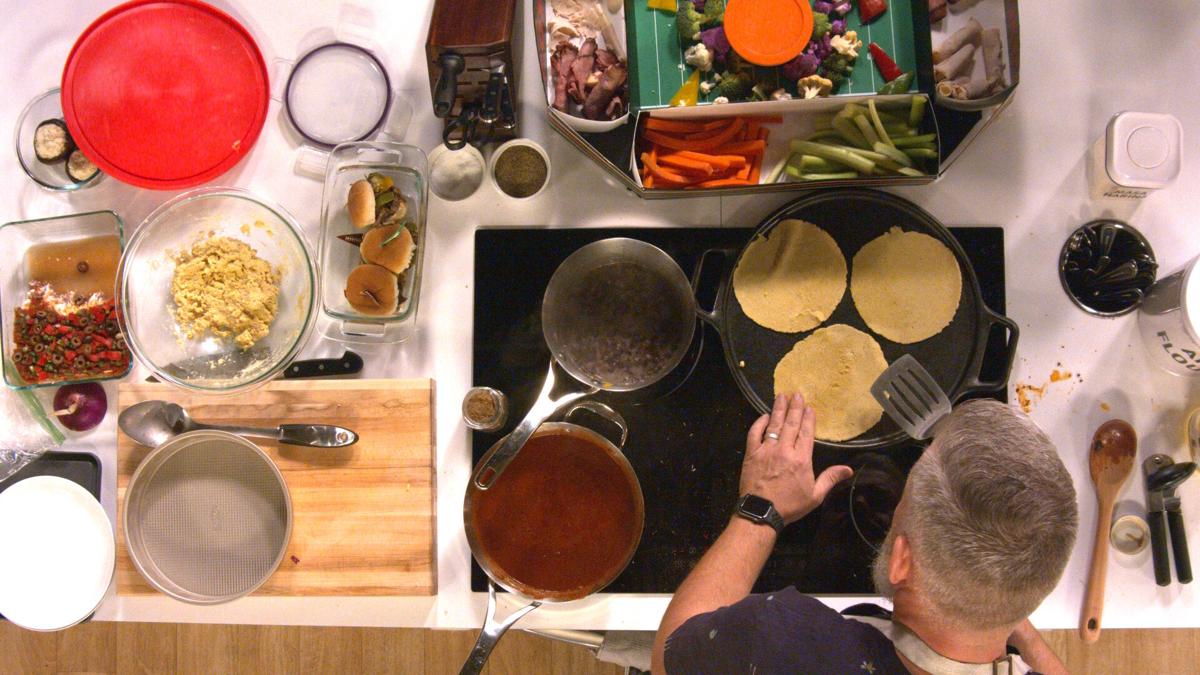 Jim Purvis once accidentally poured a can of dog food over his family’s boiled rice and gravy for dinner when he was growing up. That rice and gravy still got eaten.

Purvis, who lives in Concord, didn’t grow up with much. Every grain of rice and ounce of gravy went to use in his household, and on that particular day, he had to scoop the dog food off the top of their food and go with what he had.

So when Netflix was casting Purvis for one of its cooking shows in 2019, “Best Leftovers Ever” just seemed to fit.

The first season of the show is currently airing on Netflix, with Purvis competing for $10,000 on Episode 2. He originally went through casting with the thought of competing on “The American Barbecue Showdown” in the hope of bringing a taste of North Carolina to the streaming service. But the story about the night when he accidentally poured dog food onto the family’s dinner and then having to salvage it just lent itself to the leftover challenge.

“I learned really early how to scrape food together and how to make (due with) leftovers,” Purvis said in a phone interview Tuesday. “After we talked about that on the phone, they were like, ‘Yeah, you’re doing the leftovers show, not the barbecue.’”

“Best Leftovers Ever” is a show consisting of two rounds where home cooks have to take leftovers and turn them into something new. Purvis’ episode was a “Gameday” theme, where he had to take things like 7-layer dip, leftover pulled pork and refried beans and transform them into something different.

Purvis has a history with going out for cooking shows. He was among the final people up for selection for a previous season of “MasterChef.” He wasn’t selected, but after casting directors saw what he could bring to a camera, they approached him about doing something for Netflix. He would have loved to make it to “MasterChef,” but his experience on “Best Leftovers Ever” was inspiring.

“I had an absolute blast,” he said. “I absolutely love to cook. When I didn’t get on ‘MasterChef,’ I started doing videos for people. I really kind of did it just for friends and family, just put them on YouTube, and just got more and more comfortable getting the camera on and watching myself because I do all the editing. I do it all on my iPhone, so that became my little project.”

Purvis’ YouTube Channel, “Bearded Home Cook,” and his website, thebeardedhomecook.com, show off all the hard work he has been doing over the last few years, much of which started to come out after the Dec. 30 debut of the show.

Food and cooking not only was part of Purvis’ family when he was growing up, but it has had a huge influence on him since he started his own family. He eloped with his wife and moved onto Freedom Drive in North Carolina and scraped everything together in 1994.

After the birth of his daughter, Shelby, in 1997, things started to get better. But when Shelby turned 16, the family got devastating news. Shelby was diagnosed with leukemia and had to start treatment right away.

It was heartbreaking for the family. Shelby's treatment lasted more than 800 days, and she lost her hair twice, but it was also something that turned into an unexpected blessing. Purvis already mentioned his audition with “MasterChef,” but his history with Gordon Ramsay actually goes back a little further. That’s because Shelby loved Ramsay growing up and always wanted to meet him.

That is where the Make-A-Wish Foundation came in. Shelby made a wish to meet Ramsay and get a behind-the-scenes look at the production of “Hell’s Kitchen.” She got her wish when she and her family were invited to watch the filming of an episode.

Since then, Shelby has recovered and pursued a career in the food industry as well. Ramsay actually suggested she attend Johnson & Wales University in Charlotte, and she did just that. And after graduating, Ramsay has made her a job offer and given her a chance to come and spend a weekend with her friends in Las Vegas, all on Ramsay (after the pandemic ends, of course). She is still deciding if she'll take it.

Food has done amazing things for Purvis and his family. It has also helped raise money for the Make-A-Wish Foundation. Jim and Shelby joined Ramsay and “Hot Ones” host Sean Evans for a virtual fundraiser in December, raising more than $117,000 for the charity. Purvis isn’t sure if Shelby will take the offer from Ramsay, but he will support her in whatever she does.

“You’ve just got to throw it to the wind every once in a while and just go try,” he said. “So, it’ll happen, but I’ll be encouraging her (whatever she does).”

As much success and fortune as his daughter has had, Jim still has his eyes on big things for himself. He may be 50 years old, but he is still very driven and open to the possibility of competing once again, whether on a show like Food Network’s “Chopped” or even “MasterChef” if he could find his way to get back in the running.

The winner of “Best Leftovers Ever” wins $10,000, but he or she also has to wait a full year from the show’s airing before competing again, so that would keep Purvis from getting another shot at the competition. So, viewers will have to watch to see if he got a little financial pick-me-up from his appearance.

No matter what happened with the show, Purvis hoped he would be able to show the importance of making the most of everything in your pantry and refrigerator to feed your family. He said that if he won, he would use the prize money to start a 501(c)(3) to teach cooking and give financial tips to children throughout the area. He wants people to know they can use their money wisely while learning to bake and cook and make that dollar go a long way.

“They asked me a question: They said, ‘Hey, what’s the thing about you and boxed food?’” he said. “And they had to remind me, one of the things on the questionnaire was, ‘What’s one of your biggest pet peeves?’ And one of my biggest pet peeves is seeing people get boxes of food delivered to their home from like Blue Apron and all these other things.

“If you’re going to take the time to cook the food, make it yourself. Don’t just follow the recipe, shop for the ingredients, save yourself money, cook food for family because you can do it so much cheaper, and support the stores and everyone around you — the farmers’ market and stuff (like that).

“So that’s the No. 1 reason behind the whole ‘Bearded Home Cook’ thing, and now it’s going to be all about leftovers. I’m going to try to incorporate a lot of leftovers.”

CONCORD -- As more people become eligible to receive the COVID-19 vaccine, a unique public-private partnership is hosting the first of several…